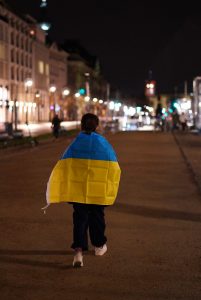 Image of girl with Ukraine flag by Lewin Bormann www.flickr.com

People who feel moved to support refugees in their time of need are prone to a syndrome known as ‘compassion fatigue’. This post-traumatic-stress type condition sets in as events like Russia’s invasion of Ukraine unfold.

Compassion fatigue is just that – an overwhelming sense of hopelessness as yet another refugee crisis occurs with few answers in sight. It’s not much of a comparison, but consider Queenslanders told to evacuate their homes on Sunday due to flooding. The difference being is they can return to their homes (with buckets and mops), once the crisis is passed and water levels fall.

No such reprieve for the tens of thousands of Ukrainians who last week packed suitcases and set off for the Polish border. It seemed the first and most obvious place to go, as there are already about one million Ukrainians living in Poland. Unlike some governments I could name, the Polish authorities so far have put no obstacles in their way, but the influx will put huge pressure on their social systems and infrastructure.

As Al Jazeera’s Mohammed Haddad reported last Saturday, 120,000 people had already fled Ukraine into Poland and other neighbouring countries, mostly to Poland and Moldova. The United Nations refugee agency (UNHCR) said cars were backed up for several kilometres at some border crossings (Poland, Slovakia, Hungary, Romania and Moldova). These countries have mobilised to receive Ukrainians and provide shelter, food and legal help. Global News Canada forecast yesterday that the tally will be 500,000 and rising by the end of the week.

In landlocked Europe, people from Ukraine fleeing tyranny are not the first and certainly won’t be the last to seek safe haven in neighbouring countries. Australia looks on from afar, safe in the knowledge that its tough border policies will maintain the status quo. To misquote John Howard circa 2012: “We will decide how many Ukrainian refugees come here and the manner in which they come.”

For readers aged under 40, Australia did not always have a hard-line attitude to people seeking asylum. Australia has accepted 900,000 refugees since 1947.

The first wave of post war migration from 1947 to 1953 saw 170,000 ‘Displaced Persons’ come to Australia after their countries were destroyed by war. Between 1953 and 1975, the Australian Government assisted a further 127,000 refugees to Australia.

Then followed a controlled system of assisted migration, ‘Ten Pound Poms’ and others who took up the government’s offer of assisted passage on the understanding they would stay in their sponsored employment for two years. That’s my Dad and his brood, escaping Scotland’s rationing, a struggling economy and notoriously cold climate.

Migrants came from all over and initially had to endure prejudice by Australians who disparagingly called them ‘Refos’ or ‘New Australians’.

They copped the abuse, lived in hostels, took on menial jobs Australians wouldn’t do and helped create the Snowy Mountains Hydro Scheme.

According to the UNHCR, 82.4 million people around the world have been forced to flee their homes, the majority of them internally displaced. Among them are over 26 million refugees, the highest population on record. Of those, 68% come from just five countries – Syria, Afghanistan, South Sudan, Myanmar (the Rohingya) and the Democratic Republic of Congo.

Even when Australians recognise that there are as many refugees in the world as there are people on our own continent, it is hard to empathise.

Even with some of the stark images replayed to us by 24/7 media, we remain inured by our remoteness. Trouble, whatever it is, happens ‘over there’. Australia is a vast continent surrounded by oceans, monitored by an over-zealous system set up in 2012 to discourage people from trying to reach our shores by boat.

It’s ironic, as the Norwegian Refugee Council observes, that at a time when a record 82.4 million people are being displaced, wealthy countries (Australia is named, alongside Denmark and others), are engaged in a ‘race to the bottom’. They are tightening their refugee policies, forcing displaced people to make dangerous and difficult choices. Once liberal countries like Sweden and Denmark have wound back their refugee intakes as anti-immigrant sentiment prevails.

The NRC says there are three things wealthy countries can do to bring about change; number one is the need to work together to protect refugees. When the Syrian conflict erupted a decade ago, neighbouring countries including Lebanon, Jordan, Turkey and Liberia took a disproportionate number of refugees compared to Saudi Arabia. Unlikely countries such as Uganda, Columbia and Lebanon take large numbers of refugees every year. But some of the richest countries in the world do almost nothing. Some, like Denmark, have wound their refugee intakes back to almost nothing.

“Japan has the world’s third largest economy and a population of 126 million. Nevertheless, it has received just 1,394 refugees in the last ten years. South Korea is at a similarly low level.  Saudi Arabia is at a similar level to Japan and the other Gulf countries are not much better.

“For most of the last decade there has been a brutal civil war in Syria, where several of these countries have been indirectly involved. It is therefore particularly inexcusable that they have not given proper protection to more of the victims of the war and taken some of the burden from neighbouring countries such as Lebanon, Jordan and Turkey.”

Admittedly, the Gulf countries have taken in a large number of Syrians as labour immigrants, but these people have not been granted refugee status.

Australia’s tough border policies seem overkill when held against the relatively small numbers of people they do allow in.

According to the Red Cross, Australia granted refugee status to 14,993 people in 2019-2020. This was done either through resettlement from other countries or by granting protection to people who had applied for asylum in Australia.

Compare that to Bangladesh, which in 2019 continued to host 854,782 people from Myanmar in a refugee-like situation . Likewise, Turkey granted temporary protection to 397,600 refugees from Syria in 2018. Soon Poland will be on this list for its welcome to people from the Ukraine.

Last Friday, I emailed FOMM reader Peter Willasden, who has travelled extensively in Eastern Europe. I confessed that although I felt moved to write about Ukraine, I lacked knowledge and insight. He did not take the ‘guest blogger’ bait, saying, after some observations about Vladimir Putin’s state of mind and the nuclear threat, “Sorry, I have yet to come up with a useful thought.”

“Stand back from the Ukraine and it highlights still something quite contrary to the expectations of only a decade ago. The end of the Soviet era, the ubiquity of social media, the economic networking of the globe led to the prediction of the rise of national, democratic movements, such as broke out of the Soviet system or led to the Arab Spring. The real consequence, seen not only in Russia but also the USA, UK, Poland, Hungary, Brazil, Turkey, China has been the rise and rise of male autocrats, tyrants and dictators. There have always been dictators but these have, uniquely, arisen using the tools of democracy or what could at least be presented as a democratic process. And Australia too is far from immune from it.”

How did we get to this point he asks, and can anything be done to reverse the situation?

Let’s check back in a year or so, Peter.