Discrimination in the 1960s, by an unofficial feminist

Despite being ranked equal first for educational attainment, Australia came in at 44th overall in the Global Gender Gap Index 2020 rankings, slipping five places from the previous year. But things are better than the discrimination evident in the 1960s and 1970s*. 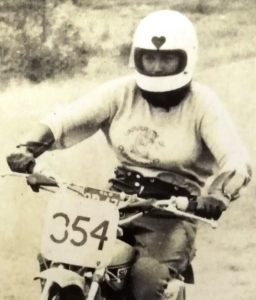 She Who Rides Trail Bikes

In 1965, Merle Thornton and her friend Rosalie Bogner walked into the Regatta Hotel in Brisbane and chained themselves to the Public Bar as a protest about the discrimination which forbade women from drinking there (instead, relegated to the ‘Ladies’ Lounge’ to drink their Shandies).

At the time, I remember wondering why any self-respecting woman would want to drink in the noisy, smelly, smoke-filled drinking pit that was the usual Public Bar. But then I was just a naive teenager, content to wear the black stockings, gloves and hat that my school rules required, even in the midst of a Brisbane summer. That same school had a rule in which the girls were not allowed to talk to the boys – the playground was separated into the girls’ section and the boys’ section. It seems a ridiculous rule now, and I thought the same at the time. I do remember attempting a small rebellion at one stage, encouraging the girls to sit on one side of the dividing path and the boys on the other, but it came to naught, so my incipient reputation as a ‘stirrer’ was saved for another day.

Then on to University, where it was often rumoured that the women were in danger of being harassed for ‘favours’ by some of the male tutors and lecturers. I didn’t experience this myself, but it seemed to be common knowledge who to avoid.

Prior to graduating, I came to the realisation that because of discrimination, women were officially paid less than men for doing the same job, apparently under the assumption that men needed more money in order to provide for a family. The flaws in this ‘logic’ are too gaping to bother elucidating. I decided at the time that I wouldn’t seek any employment that had such a discriminatory policy. By the time I was in my last year of University, the female wage for teachers was 90% of that for men and there was equal pay by the time I graduated. The requirement that women resign on marriage had gone by the board some time previously (see time-line below).

I had a Holden Ute and a trail bike which I used to race on the dirt track at Tivoli near Ipswich. Of course I had to have a full set of leathers. I had a red leather jacket and black pants (with red hearts on the knee patches). As I was wearing a full-face helmet, it was sometimes a bit difficult to tell there was a female on the bike, except that I was pretty slow. There were a couple of other women racers as well. We’d race in the same races as the men, but there was usually also a ‘ladies’ race’. I didn’t think of it as pioneering anything at the time, but I guess it was a bit unusual.

I asked an artistic friend of mine to paint a red Suzuki ‘S’ on the driver’s side door, which he duly did, but added an embellishment of his own by painting the Women’s Lib sign on the tailgate. I don’t think that the rather conservative principal of the school where I was teaching was favourably impressed with that.

After some years teaching, I took a break for a while then applied for a job with the Probation and Parole Service as it was then called. There was a vacancy in Toowoomba, which would require travelling to towns further west from time to time One of the interview questions asked was what I would do if I got a flat tyre. My reply was that I would lift the bonnet and wait for someone to give me a hand. That seemed to satisfy them, as I got the job. I’m not sure how many other women were doing that job at the time, but we were definitely in the minority. I believe it was somewhat grudgingly accepted that women employees were needed as there was a growing number of female probationers and parolees. Not that we were confined to supervising women only, so I guess you could call the Service an equal opportunity employer.

Being a State Government job, it was quite well paid, and in those days, a permanent position. I assumed that there would be no problem obtaining a loan to buy a house (for the princely sum of $17,250 – a three-bedroom weatherboard on a large block near the Showgrounds in Toowoomba.) I had quite a good deposit, and as I’d been banking with the same bank since I was at school, I assumed I’d have no problem obtaining a loan. Not without a male guarantor! I withdrew my money from the bank and never darkened their doors again. I’m looking at you, Commonwealth Bank!

Tuesday 8th March was International Women’s Day. According to an article from the BBC that I read, the date of 8th March was formalised after a strike in Russia in 1917 in which Russian women demanded “bread and peace”.

The strike began on the 8th of March and after four days, the Tsar was forced to abdicate.

We can only hope history repeats itself!

Discrimination against women in Australia 1960s-1970s

Despite the introduction of the Federal Sex Discrimination Act in 1984, women continue to be disadvantaged. In case you forgot, the Act prohibits discrimination on the basis of sexism, homophobia, transphobia and biphobia, as well as sex, marital or relationship status, actual or potential pregnancy, sexual orientation, gender identity, intersex status or breastfeeding in public.

1956: Until this year women were prevented from teaching full-time after marriage. The Temporary Teachers Union lobbied for this restriction to be dropped;.

1961: Women could buy the contraceptive pill but initially it was only available (on prescription) to married women and carried a 27.5% ‘luxury item” tax;

1971: The Bank of New South Wales (now Westpac) became the first Australian lender to lend money to a female without a male guarantor;

1972: Gough Whitlam introduced a single mother’s pension. It was later broadened to a single parent pension (available to men and women);

1974: The minimum wage was extended to cover women;

1983: Married women could apply for an Australian passport without needing an authorisation from their husbands;

1991: the marriage age in Australia of females was increased from 16 to 18 (the same as males;

Great piece thanks Laurel, I imagine you have seen the film Brazen Hussies currently available on ABC iView I think.

*Bread and Roses* the song is commonly associated with the Lawrence Massachusetts textile workers strike of 1912, after the textile corporations cut the hours and salaries of all workers in response to the State of Massachusetts passing a law limiting the working hours of children under 18 to 54 hours a week.

That timeline is astonishing. “1983: Married women could apply for an Australian passport without needing an authorisation from their husbands.” So recent, in my own timeline!