Home Friday on My Mind Ageing Spreading the word about U3A

Spreading the word about U3A 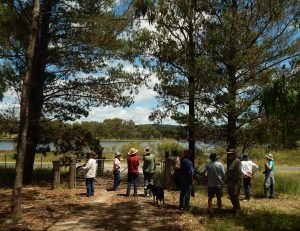 (Photo by Bob Wilson): U3A Warwick birdwatchers checking out the shallow end of Storm King Dam while on a recent excursion.

One of the positives in retirement is that it allows one to volunteer with valuable community organisations like U3A. It’s not that uncommon to meet people who have never heard of the University of the Third Age (U3A), an international organisation with broad aims of helping educate and entertain its 450,000 members, who are now in their ‘Third Age’ of life.

U3A originated in France in 1973 as an extramural university activity. This was significantly modified in the UK where it was recognized that most people of retirement age have something to contribute. The UK model, which Australia has adopted, emphasises sharing without formal educational links, that is, ‘study’ without the pressure of homework or exams. Membership is open to people who are winding down to retirement or are already retired.

Australia’s first U3A began in Melbourne in 1984 and has grown to 250 U3As with about 100,000 members. These metropolitan, regional and rural chapters develop programmes of teaching and learning over a wide range of subject areas, dependant upon the membership’s own expertise, knowledge and skills.

For example, in our local Warwick U3A, the retired principal of Scots PGC College, Neil Bonnell, tutors two courses – China Today and the Bible as History. Mr Bonnell, a much-travelled senior educator, taught at well-regarded schools in England, Uganda and Australia, finishing his career with a year in China. Last year he started writing his memoirs, which have been published in the Warwick U3A Emag and quarterly newsletters. The final chapters can be found here.

In 2003 Neil began tutoring and giving bridge lessons for U3A Warwick. He is a founding member of Warwick Bridge Club and past-president and a long-serving committee member of U3A.

I started attending Neil’s up to the minute and insightful class “China Today” this year. The advantage of being a member of a U3A course or class is that you can sit back and soak up someone else’s great knowledge and experience for a very modest annual subscription. All tutor and committee roles are voluntary. Local U3A chapters are supported by State and Territory Networks; organisations which help local committees with more complex issues (like developing a Covid policy).

Queensland U3A Network president Gail Bonser reflected on the struggle to keep U3As going through the pandemic and restrictions which saw some classes postponed or cancelled.

“Managing a U3A during the COVID epidemic has been taxing for many. Quite a few U3As have experienced a reduction in numbers and with it a reduction in their income.  All were closed for several months during 2020 and because of their special circumstances, some did not reopen during the remainder of that year.

“During the shutdown, the Network formed a communication group which enabled U3A Presidents or their representatives to keep in touch and to share ideas, experiences and management techniques.  Once Level 3 restrictions were introduced, it became possible for U3As to recommence classes and activities and members of the group exchanged documents such as COVID Safe Plans.”

Ms Bonser said associations were hoping for a COVID free start to 2022 but the Omicron spike intervened.  Most U3As cancelled their January Enrolment Days, made alternative arrangements and/or delayed the resumption of classes to early February.
“Thankfully it seems that U3A members have largely avoided the worst effects of the disease. That may have been one of the few positives.”

I joined the Warwick committee at the time we were looking for someone to edit the quarterly newsletter. The former editor had been producing a monthly Emag as well as quarterly newsletters. I took the job on the proviso I’d phase out the monthly magazine. Since then, my role has been extended to include updating our website and posting new content as appropriate.

Our chapter hosts outdoor activities including Tai Chi, bush walking and birdwatching. There are language classes, card groups, art and craft classes, meditation, music appreciation and this year, two new dance classes – Line Dancing and Scottish Country Dance. A new gardening group was formed in 2022 and retired teacher Stephen Jackson is next term resuming his popular opera class. Some courses are so popular there is a waiting list (wood crafting, for example).

Two of the four groups I joined require getting out of bed early – bush walking and birdwatching. Both activities depend on what the weather is doing at the time. Last year, our bush walking group’s expeditions included a day at Girraween National Park and a visit to Cunningham’s Gap nature reserve. The birdwatching group also travel afield and in February visited a private property at Storm King dam near Stanthorpe.

I was recently talking to a younger friend in Brisbane (late 40s) and mentioned U3A. He had not heard of the organisation but after I gave him an overview, he said it sounded like something his Mum would enjoy.

U3A members are from all different backgrounds, but it is not uncommon to meet people who have had a university education and a professional career. Perhaps that is why we have not one but two book clubs. One is a formal book club (everyone reads the same book and then the group critiques it). A new course started this year involves re-reading old Australian classics, starting with Peter Carey’s True History of the Kelly Gang.

Our U3A has about 125 members and is currently running 27 courses, so there is a lot of choice. There is also provision for members to take part in other activities through U3A Online.

As for volunteering in general, I recommend it for older people (70+) as a way of keeping your brain sharp and sharing your life experience with others. I started volunteering in 2021 as an occasional tour guide at Glengallan Homestead, a grand country home from the 1870s that was rescued from ruin. Then I joined a local refugee support group and along the way stepped up my involvement with U3A. In a way, volunteering is like one of the main aims of the organisation – to encourage people to try something new.

As someone remarked after I accepted the position of chair of the Southern Downs Refugee and Migrant Network – “You’ll grow into the role, Bob.”

The only problem with U3A (if like me you have a 40-year-old brain), is that you only ever meet people your own age (early 70s) or older. While that firmly cements me in the demographic to which I belong, it can also be a gratifying experience. Those of us who lost our parents relatively early in life can always benefit from the wise counsel of an older friend.

The message today (for readers under 50) is to subtly suggest to your parents (or grandparents) that they check out U3A. A year of absorbing activities and new friends for the price of a pub lunch. As for my peers, you don’t have to just sit there and watch daytime TV or play Solitaire on your computer. Go for a regular walk, join a seniors’ gym class, interact with grandchildren and look into U3A. Do as I say, not as I do (says he, flexing his ab). As they say, physical and intellectual activity can enrich and prolong life in one’s later years – just ask me!