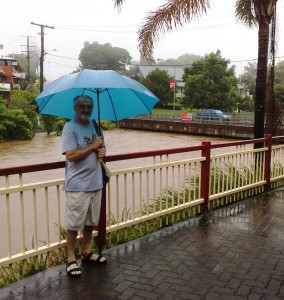 Bob Wilson is a songwriter and journalist who has never quite been able to decide between one or the other. Bob spent 25 years working for mainstream newspapers before baling out in 2005 to start a media consultancy.  He and partner Laurel are The Goodwills, a contemporary folk duo of some longevity. If you listen to Macca on a Sunday morning, you will have heard some of Bob’s songs, including Courting the Net (otherwise known as My love is on the internet (again), splendidly rendered by Laurel, with Bob on guitar and harmonies and Silas Palmer on fiddle.  Bob went back in the studio in 2014, after a 12-year hiatus (not including the 2007 live CD “Loungeroom Legends” to record The Last Waterhole, which was launched on February 28, 2015.  Friday on My Mind evolved in May 2014 mainly from a sense of exasperation with the sins and omissions of the daily media. As Bob told a fan: “not that I want to bite the hand that used to feed me, but I think intelligent readers want more than a picture of Kate Middleton’s bum.” Bob wrote a lot of short stories and poetry as a teenager but unhappily burned almost all of it and did not take up the pen again until 1975. After a few years of having poetry, short stories, reviews and columns published in literary magazines and other publications long out of print, He worked his way into journalism by taking on free-lance assignments that no-one else wanted to do (writing reports about night softball matches in the winter). Those of you who lived in Toowoomba in the early 1980s might recognise the prose style of Friday on My Mind.

Bob’s closing words on this brief summary: “My pet hate is writers who talk about themselves in the third person – it should never happen!”