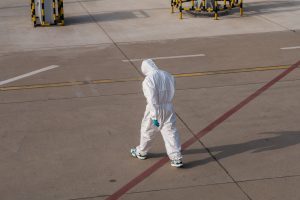 Today I thought it wise to mostly bypass the relentless onslaught of negative news about Covid-19. Instead, let’s talk about Advance Care Directives, Do Not Resuscitate (DNR) orders and organ donation.

I can’t imagine anyone under 50 who has given these topics a moment’s thought, but read on. Twenty years from now you’ll say to your partner – ‘Remember that piece Bob wrote about DNRs? Maybe the time has come?’

The topic arose as the Covid-19 death toll in New South Wales reached 132, including 80 since early June. The Australia-wide death toll since 2020 is now 989.

Although we have wills and have given each other enduring power of attorney, there’s something about DNRs and Advance Care Directives that sounds, well, permanent.

I came to this topic after counselling someone whose two life-long friends are simultaneously succumbing to terminal illnesses. As we age we start to experience more episodes of friends and relatives dying or being inflicted with infirmity through strokes or dementia.

The advanced care directive gives individuals the power to state what should happen to them should they be in a comatose state.

How many times have you heard someone say ‘if that happens to me, take me out the back and shoot me?’ It’s a fine philosophy. But unless you stipulate in a legal document what you want to happen if you are incapacitated but still breathing, you will remain hooked up to machines that keep you alive.

DNR orders have been around since the 1970s, but problems remain communicating the wishes of loved ones. For example, a resident of an aged care home is found unresponsive and not breathing. The carer believes the resident has a DNR order in place, but it’s not documented. So they have to decide whether to leave the resident while look for the correct documentation, or stay with the resident and begin CPR (cardiopulmonary resuscitation)

“Nurses report residents being resuscitated even when a DNR order is in place, and the family and the resident (after he survived) came away angry and disappointed he was put through such heroic measures”.

The problem arising from the example cited is that CPR can injure people, especially the frail or old. Worse though, if the person’s heart has stopped beating for a long enough period it can lead to brain damage and a lingering and undignified end of life.

So we all know this; we have all heard similar stories. Yet here we are in our early 70s, still procrastinating about what we want to happen should we be found unresponsive and not breathing.

Those who follow any number of religions may choose to bypass the choice to have a say in what happens in their dying days. While my mother sought such treatment as there was for cancer in the 1960s, she firmly believed the outcome would be “God’s will”.

When you do get around to making a Directive, you may also wish to donate your organs, or those organs which are still in good enough shape to give away.

This is where younger people come into the picture. If you had a bad car accident and died of head injuries, what would you want to happen to your perfectly healthy heart and lungs?

Too dark for a sunny Friday afternoon? Songwriter Loudon Wainwright III put it all in droll perspective in a two and a half minute song, Donations.

“In case of an accident, who could they notify – would it be alright if they notified you?”  he begins.

After discussing his lonely life as an ‘unmarried orphan’ he envisages someone fishing out his wallet and looking for a donor card:

“As for my corneas, I don’t care who gets them, but all other organs and parts are for you.”

But Bob, you’re saying, spluttering into your cappuccino or your first cocktail – this is no laughing matter.

No, it isn’t, but neither is lying in a coma, intubated and kept alive by a machine when a signed and witnessed document could save everyone a lot of heartache.

There’s a global debate around the ethics of dealing with DNR orders during a pandemic, where ventilators are in short supply.

The journal Frontiers in Public Health says DNR was only discussed amid the H1N1 influenza pandemic in 2009, with clear global recommendations.

“The unprecedented condition of the COVID-19 pandemic leaves healthcare systems worldwide confronting tough decisions. DNR has been implemented in some countries where the healthcare system is limited in capacity to admit, and thus intubating and resuscitating patients when needed is jeopardized”.

Most of the 988 Australians who have died of Covid-19 were in the 70-90+ age groups. In the absence of local research, here’s an example from the US that sheds some light on the prevalence of DNRs among older people.

The proportions were similar in a study carried out by Sheffield University in the UK. We could also have a debate about whether the term ‘resuscitate’ applies in Covid. Intubation is often used not to resuscitate but to keep the patient oxygenated and reduce respiratory distress.

In my teens I had a fair interest in philosophy and comparative religious studies, which probably explains why I am out here today on the agnostic high wire. I remember someone using a word which I misheard as ‘Youth in Asia”. These were the days when research was done in a library using an index card system. Eventually I discovered that euthanasia had nothing to do with rebellious teens in Asia. Fifty years or more later, the notion of assisted dying, or aid-in-dying as it is called in the US, is strongly resisted in many countries. The degree of resistance is usually linked to how devout the population is and the strictures of dogma.

Nevertheless, when faced with a terminal illness diagnosis, many people take whatever treatment or palliative care that is on offer.  Towards the end, this is typically morphine and its derivatives or, where it is legal, medicinal marijuana.

Palliative care, which has been in use since the 1960s, skirts between aid-in-dying and palliative sedation.

The boundary is “fuzzy, gray and conflated,” according to David Grube, of the advocacy group Compassion and Choices.

“In both cases, the goal is to relieve suffering”.

Thomas Strouse, a psychiatrist and specialist in palliative care medicine at the UCLA Medical Centre, believes there is a difference.

“The goal of aid-in-dying is to be dead; that is the patient’s goal. The goal in palliative sedation is to manage intractable symptoms, maybe through reduction of consciousness or complete unconsciousness.”

Be that as it may, you are less likely to get what you want without an advance care directive.