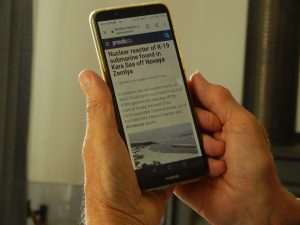 I think I already knew that 80% of Australians were dependent on digital news. Last week I was asked to give a talk at a business breakfast on ‘The past and future of newspapers’. It was a bit of a revelation, drawing on historical data and reflecting on my experience as a regional journalist in the early 1980s. At the time, the old technology (Linotype, lithography, telex, hand subbing) was making way for the computer revolution.

Prior to the mid-1980s, newspapers had an absolute monopoly over classified advertising. If you wanted to sell a car, employ someone, rent a house. hold a garage sale or post a death notice, the classifieds were the only option and they were not cheap.

The supremacy of what Rupert Murdoch once called ‘the rivers of gold’ started faltering, first with competition from specialist trade magazines and then from the fast-developing Internet.

Some brave journalists – call them early adopters – set out to start up their own newspapers. They worked from home and used desktop publishing. Their free newspapers offered ‘classies’ at heavily discounted prices and disrupted the business plan of media giants. The common response was to buy out the upstarts and shut them down.

Once the Internet began to gather momentum, advertisers started to find cheaper ways to sell things. Free on-line markets like Ebay further eroded the traditional profits of newspapers. The big media owners started to buy on-line businesses to compete on both levels. The resulting domination of digital media media advertising, mainly Facebook, has led, in this decade (2010-2021) in particular, to an accelerated decline in print newspapers.

For example, Rupert Murdoch’s once-dominant Herald Sun in Melbourne has come back to the pack. Last week Crikey did a bit of homework on the newspaper’s falling circulation figures (from a peak of 600,000 in 1990). Crikey discovered that the Herald-Sun had fallen to fourth place among News Corp’s Australian mastheads. It also lost its No 1 spot overall behind Nine’s The Age.

As of June 30, the Herald Sun had tumbled to 146,026 subscribers across print and digital products, according to internal figures reported to the US Securities and Exchange Commission.

Crikey’s Christopher Warren, who, during better times in newspapers, was president of the journalists’ union, wrote:

“The ‘Don’t read the Herald-Sun’ campaigners will be eager to claim credit for the masthead’s fall. They’ve been targeting the paper for its critical coverage of Melbourne’s 2020 lock-down.”

This subscriber-only article prompted much comment on social media from Melbourne folk who apparently do not rate the Herald Sun. Mohamed Mohideen said on Facebook, “Most times they give it free in many places just to say they have a big circulation.

I use it for my cat litter.”

Global data and analytics company Nielsen says 80% of Australians turned to digital news and apps to stay informed in the June 2021 quarter. The total time spent peaked at 1.6 million hours on May 27, when the Victoria Government announced a seven-day lockdown. The next highest, 1.5 million hours, was on June 27, on the first day of the NSW Government lockdown.

Nielsen says the increase was primarily driven by news content consumed on mobile devices. The average daily time spent increased in June by 12%, compared to the same month in 2020. These figures, drawn from a Nielsen press release, are as much as the company is prepared to share. Because of a stalemate with IAB Australia, the trade association controlling on-line advertising, Nielsen stopped making the data public in January and has so far not resumed.

Nevertheless, the Internet being what it is, someone posted the June 2021 ratings on Twitter.

News Corp decided back in late 2017 to opt out of Australia’s system of measuring daily circulation, as reported by the Audit Bureau of Circulation. Since then, media analysts and commentators have had to rely on emerging surveys by data companies including Nielsen and Roy Morgan.

Media and marketing website Mumbrella commented that by withdrawing from the Audited Media Association of Australia, News dealt a near fatal blow to the future of print circulation audits in Australia.

News Corp said at the time advertisers should now look to Enhanced Media Metrics Australia (EMMA), which was created by the newspaper industry in 2013 to promote readership numbers, rather than circulation, as the key metric.

When you read about the inevitable shift to digital media, it is hard to know how media owners will convince people to pay for it. According to the Australian National University’s Digital News Report 2021, the percentage of people paying for on-line news (13%) has changed little since 2020.  Of the non-payers, only 12% say they are likely to pay in the next 12 months. Only a third of Australians are aware that news outlets are less profitable than a decade ago or are concerned about it.

News Corp’s decision in 2020 to rationalise 112 regional titles across Australian has had ongoing ramifications. According to The Guardian, 20 of the regional papers owned by News Corp have been absorbed into the on-line editions of News Corp’s subscriber-only metropolitan newspapers.

Other cost-cutting measures include a decision to no longer deliver print newspapers to far flung regional Queensland (affecting Mt Isa, Longreach, Charters Towers, Emerald and towns in the State’s south-west).

As the report observed: “All major publishers leaned into rapid transformation and a shift to a a digital world.”

So here’s this week’s homework: are you a NO (newspaper only), a NAD (newspaper and digital) or a DO (digital only). Perhaps you may even be an NRN (never read newspapers). Do tell.

Here’s a few insights into the habits of digital newspaper readers, 54% of whom consume news over breakfast or on the daily commute:

Alarmingly (well, I was alarmed), 10% of people over 75 get their news from social media. Let’s hope it’s not one of those obscure conspiracy-based outlets.

*I wrote about left handers a few weeks back. If you were trying to find the left handed guitar website, here it is: https://leftyfretz.com/