Strolling Through an Historical Village 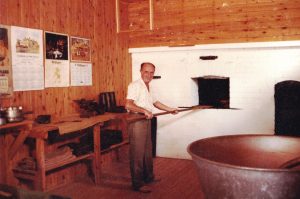 Dad Wilson in the bakery at Miles Historical Village, circa 1984

A sure sign of advancing years is just how quickly you can identify household objects when visiting a local historical village. In my case, this is particularly so when an historic house has preserved its original laundry – twin concrete tubs, a mangle, a copper, a metal baby’s bath hung on a nail and a flat iron (designed to be heated up on a wood stove). Not to mention wire washing lines, strung between the outhouse and a sturdy tree, held in place by heavy timber clothes props.

We have a passion for visiting historical villages and museums, especially in the outback. I mean the ones in small communities, primarily run by volunteers. Not that there’s anything wrong with The Stockman’s Hall of Fame, Sovereign Hill (the gold rush town at Ballarat), or what used to be Old Sydney Town, But they are more theme parks than keepsakes of communities past.

Today’s photo, which I’ve shared on Facebook before, is my Dad, re-creating his days as an apprentice baker in Scotland. He is seen here in the replica bakery at Miles Historical Village in western Queensland, circa 1984.

The Miles museum, celebrating 50 years in 2021, is an outdoor historical village consisting of a 1900s streetscape, with 36 buildings. They include a bakery, a post office, chemist and general store. The re-launched Artesian Basin Centre houses information on artesian water, Aboriginal history, and land care. There’s a War Museum with displays from all World Wars. The historical village is operated by the Miles Historical Society. Its collections comprise memorabilia donated by families in the district. While the museum was closed for 56 days during the worst of Covid-19, plans are afoot to celebrate its 50th birthday as part of the Miles Back to the Bush festival in September.

Wherever you journey around Australia, you will find (mainly European) regional history, preserved in historical villages, museums and outdoor displays. An example of the latter is the Machinery and Heritage display at Ilfracombe, between Barcaldine and Longreach. If you have an interest in old farm machinery and the like, it can take an hour or two to stroll along the highway stretch. If it’s a hot day, you can repair to the Wellshot Hotel afterwards for a chilled libation.

There are also few buildings along “Machinery Mile” which house items of local history that would not last in the outdoors.

Further west, in Winton, a visit to the rebuilt Matilda Centre includes admission to the original history museum, which includes a well-preserved settler’s cottage. Like most such houses, where rooms have been set up as they were in the 19th century, wire grilles keep us from really appreciating the atmosphere. They do safeguard the memorabilia, however.

On the other side of town, Winton has its Diamantina Truck and Machinery Heritage Centre, most of it under roof. We visited on a rare rainy day, so it was a good reprieve from the windy conditions.

This museum costs just $5 to enter. We’re told that most of the prime movers, trucks, fire engines and tractors kept under roof are in going order. All they need (perhaps in 2021), is a street parade, a regional show, a rodeo or camp-draft to show themselves to the public. 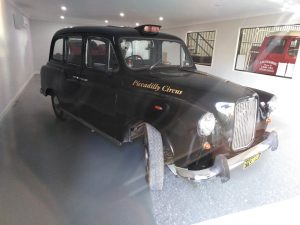 Included in the display is a 1976 London cab. Museum secretary Robyn Stevens told me it was acquired and imported by a local donor who has loaned it to the museum. As befits such a rare vehicle, some 20,000kms from its original home, it is kept in an air-conditioned room.

Likewise another prized item – a fully restored, 1910 Talbot fruit and vegetable delivery truck, on loan from the Cassimatis family of Muttaburra.  While browsing, I found a Bedford cattle truck made the year I was born (and possibly in better condition!).

The Dawson Folk Museum in Theodore was also a good find, as it is tucked away behind the main street. The museum is housed in a former power station and has a large collection of photographs covering pioneer families, Aborigines, ex-servicemen from World Wars I and II, and modern photographs – all tracing Theodore’s development. Displays include the history of early station families, a pioneer kitchen and bedroom and farm machinery.

Curiously, we could not find one mention of the State’s only Labor Premier of that era, ‘Red Ted’ Theodore,after whom the town is named.

One of the more comprehensive historical villages can be found near the Calliope River park south of Gladstone. We camped beside the river and set off for a look, admittedly a bit late in the day. The volunteers who locked up at 5.30 said we were welcome to come back and finish the tour the next day, which we did.

The Calliope River Historical Village, originally a cattle property, is located on 1.12ha of riverside land.

The village comprises a large number of original buildings, all of which have been relocated over a 40-year period from within a 60km radius. 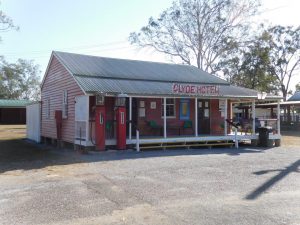 Buildings include several large country homesteads, a pioneer cottage, the Clyde Hotel (with a current liquor licence), an old school house, a jail, a church (hired out for weddings,) and a woolshed full of machinery and memorabilia. There is also a vintage steam train and carriages to explore.

The village holds monthly markets which were put on hold for much of 2020. Mary Lou said that now the markets had resumed, they have been well patronised and everyone had co-operated with the Covid 19 rules. The markets attract many stallholders and big crowds and the revenue is vital to the ongoing upkeep of the village.

A large building on-site is home to the Gladstone Model Rail Group, which maintains an elaborate model railway village. The model rail is operational and open to the public on market days. The group also meets on Tuesday nights for its weekly get-togethers.

If visiting community-run historical villages is something that interests you, open your wallets and purses wide. Admission fees are usually modest (Theodore’s museum was just $2), so make time for afternoon tea, buy a drink, an ice-cream or a postcard. Go for broke – make a donation.

Speaking of donations, I just sent a few dollars to Wikimedia, which is on its annual fund-raising quest. Some 98% of Wikipedia’s readers use this on-line resource without ever contributing to its upkeep. I often use Wikipedia as a source for general information, (e.g.) background on the Miles Historical Village and Museum. Some people help Wikipedia by updating and editing existing pages. Or you can just send them (they suggest $2.75), a modest donation. It’s worth thinking about.