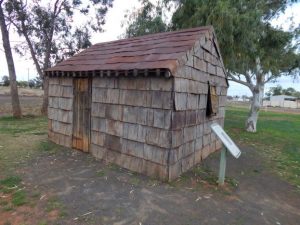 This week we are leaving president-elect Joe Biden to struggle with his Disunited States, to reflect on a time in Australia’s history when homeless people were forced to build kerosene tin huts. This Depression-era story may also give us pause for contemplation as the year-long corona virus pandemic sends many nations into deep recession. No-one wants to use the D-word but also no-one can predict how long countries will have to deal with Covid lock-down periods.

As you may already know, if you also subscribe to our Goodwills Music page, we wrote a song about it. I had the idea couple of years ago when visiting Morven, in south-west Queensland. The show piece of the historical village there is a Depression-era kerosene tin hut. It was built by the late Bob Johnson, whose widow Ethel runs the village.

A sharp-witted reader wanted to know if I was ‘trumpeting’ the new song in last week’s piece about Nellie the Elephant and the price of democracy. I prefer to think of it as drollery (listing it as one of the news stories you may have missed because of the mass media preoccupation with the US election).

Sometimes I have an idea for a song and it loses momentum because I can’t match the lyric to a tune (or maybe I’d rather watch Grey’s Anatomy). Kerosene Tin Hut sat in the drawer for a year or so until She Who Now Also Writes Songs helped me stitch the lyrics together.

As you may gather, we were brought up by parents who lived through the Great Depression (and WWII). They were frugal, good at recycling before it was a thing and were fond of sayings like “never a borrower or a lender be”. Goods could be bought on lay-by, but never on ‘tick’.

That generation was good at saving to buy a particular item deemed necessary for a family – like a fridge, or a washing machine (once the copper and the mangle went to historical villages). I remember once complaining about not having a wardrobe in my bedroom. Dad brought home three wooden butter boxes from the bakery. He stacked them one on top of the other and Mum made a curtain to hang on the front. This is where I stashed my Famous Five collection (I’d grown out of them), and recently collected Mad magazines.

People who battled through the Great Depression (1929-1939), became adept at “making a muckle out of a mickle” as Mum and Dad would say.

Not much has been written about that period in Australia when shanty towns were developed on common land, usually on the outskirts of towns and cities. This happened as unemployed families were either evicted from rented dwellings or worse, lost the homes they were struggling to buy. Small communities formed on Crown land, where the inhabitants did not have to pay rent or rates. They erected corrugated tin huts or, more commonly, kerosene tin huts.

Maleny reader Mike Foale remembers the kerosene tin era, but for different reasons. He contacted me after I’d sent the new song around to a mailing list.

Like others, he asked the obvious question – where did the kerosene tins come from? Kerosene was widely used in the 1920s for cooking, lighting and refrigeration, but also provided cheap fuel for tractors.

Mike recalled from his days growing up on a farm in the Mallee that the early tractors of the 1920s to the 1950s ran on kerosene, as did other stationary engines used on farms.

“Kero was imported in four gallon (20 litre) square-top tins, with a box around the tin for travel security.

“On our farm, the boxes were converted into shelf units. Dad had to sell the early tractor off (a Caterpillar) for lack of maintenance services in the Mallee. So I grew up in the 1940s with draft horses doing the farm work, but the shed was full of empty kero tins.”

Kerosene tins were popular in Tin Town because they could be cut into square tiles with tin snips then stapled together over a bush timber framework.

Western Plains Cultural Centre local activities officer Simone Taylor has researched the ‘Tin Town’ which existed in Dubbo, NSW. The town formed in the late 1920s during the onset of the Great Depression and disappeared 20 years later. Ms Taylor told the ABC in 2018 there was a a lot of stigma attached to ‘Tin Town’.

“The shanty’s residents were pitied by the people of Dubbo. I think the people in Tin Town were getting on the best they could, but in newspaper reports it’s clear the town was seen as a social issue to solve.”

Tin Town survivors recall the hardships – there was no electricity and only a single community tap to access water. Council collected rubbish and sewage every week for a small fee.

In Dubbo, as in other locations where Tin Towns evolved, kerosene tin huts were erected on Crown land. They did not appear on official maps, so historians rely upon people’s memories and references in old newspaper articles.

Australian National University historian Joan Beaumont told the ABC that Australia was one of the countries worst hit by the 1920s crash. Communities that relied on wool and wheat exports suffered the most as global demand fell away. While the evidence suggests that Tin Towns housed families and pensioners, Professor Beaumont said single men without strong family connections were more likely to live in tin shanties.

Why is this relevant today, you might ask, when our wealthy are uber-wealthy, well-educated professionals are doing well (in two-income households) and the middle classes are, well, in the middle?

The massive disruption to the orthodox economy caused by Covid-19 has forced even conservative governments to use Keynesian economics to manage the crisis. The theory evolved by John Maynard Keynes advocates increased government expenditure and lower taxes to stimulate demand. This, rather than monetary economics (controlling the supply of money), is more likely to help avert a global depression.

There is a domino effect when people who depend on a wage to pay rent or service a mortgage, not to mention car loans, credit cards and ‘60 months nothing to pay’ consumer lures, lose their source of income.

The job goes, the search for work is fruitless, the bailiff comes calling. Suddenly, you are living in your car (the 21st century version of the tin hut). Those of us with a proper roof over our heads ought to count our blessings – count twice when rain falls.

As this recent Sydney Morning Herald article informs, the early help offered to get homeless people off the street in 2020 is being wound back. While the official homelessness figure is north of 116,000, the Australian Homelessness Monitor found that 290,000 people sought homelessness services in the year before the pandemic.

Homelessness numbers fell between April and June this year as a result of Federal government assistance, a moratorium on evictions and a targeted campaign to get rough sleepers indoors. But the future is looking somewhat bleak as supports come to an end.

Telling people to stay home during a Covid spike is all well and good if you have a home in the first place. The alternative may well be descensus in cuniculi cavum (descent into the cave of the rabbit), or in 2020 vernacular, down the rabbit hole.