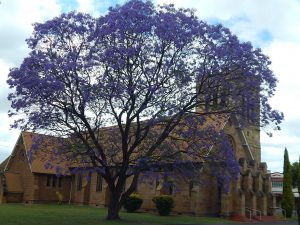 On Remembrance Day (November 11), we met a Year 12 student who had been singing in our community choir but had taken time out to concentrate on her studies. She told us (with some excitement), that school was set to finish the following week. That reminded me of the old Queensland maxim about flowering jacarandas and exam times. The story goes that if the jacarandas are flowering and you are behind on your studies, it is too late!

That may have changed over the decades as climate change has led to earlier flowering, not only of jacarandas, but cherry blossoms (and pohutakawas). More on that later.

When I visited Brisbane in late September, the jacarandas were already starting to bloom. They flower later across the Southern Downs, as we know, but even so, this old jacaranda in the grounds of St Mark’s Anglican Church (above) was starting to lose its blooms as I took this photo on November 9.

Warwick has some lovely mature examples of this tree, many of them in the front or back yards of private homes. In some towns and cities (Grafton, Toowoomba, Brisbane, Sydney’s north shore), jacarandas were planted on either side of city streets, to create a stunning, if ephemeral display from mid-October to mid-November.

Jacaranda is the name for a genus of 49 species of flowering plants in the family Bignoniaceae, native to tropical and subtropical regions of the Americas. Wikipedia describes it as a ‘cosmopolitan’ plant.

It is common across many continents and countries including Argentina, Botswana, Brazil, Florida, Israel, Italy, Mexico, Paraguay, Portugal, Saudi Arabia, South Africa, Southern California, Spain, Zambia and Zimbabwe. The jacaranda is also found in New Zealand. It has been introduced to most tropical and subtropical regions and is widely planted in Asia, with trees visible in Nepal, Pakistan and India.

These days, the tree is seen as an invasive foreigner although with a loftier status than the camphor laurel, deemed to be an invasive weed. Regardless, Australian towns and cities compete for status of champion jacaranda; examples including Grafton, Brisbane, Toowoomba, Sydney, Melbourne and Perth (although not until December in WA).

Apart from the obvious connection with school and university exam times, the jacaranda’s purple haze is the first real sign of Spring. Many romances have hatched under their sheltering boughs. Songwriters have mentioned the jacaranda in songs, even!

When at their peak, the showy trees are hard to beat for a visual spectacle. Unfortunately, the triumph is short-lived, with storms, rain and wind soon littering the ground with purple flowers. As staff in hospital emergency rooms would attest, ‘slipped on wet jacaranda flowers’ is a common refrain when patients present at the fracture clinic. 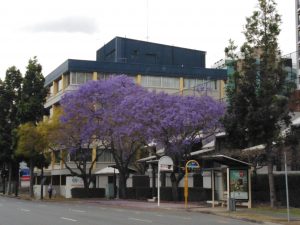 When visiting Brisbane on September 27, I was surprised to see this jacaranda on Coronation Drive. Although I set out to write a ‘light and fluffy’ piece, it did not take much to uncover the climate science take on this. An article in The Conversation and republished in other journals similarly observed the early flowering of jacarandas in South Africa.

Jennifer Fitchett, Associate Professor of Physical Geography, University of the Witwatersrand, explained why early flowering of Jacaranda mimosifolia is a ‘warning sign’. Gauteng Province’s proliferating jacarandas have in recent years started flowering in early September. Octogenarian residents interviewed by researchers recalled the trees flowering in mid-November in the 1920s and 30s. The trees, native to Brazil, were introduced to Pretoria and Johannesburg in the late 1800s. Civic leaders of the time deemed them an ornamental worthy of lining streets in the suburbs and CBD. You could write a thesis about how the seeds ended up germinating in foreign soil.

Professor Fitchett wrote that jacaranda flowering had gradually advanced over the decades to mid-October and now to September. She described this process as ‘phenological shift’, which has been observed in multiple flowering tree species around the world. The earlier flowering is a key indicator that the planet is warming.

“Because jacaranda blossoms result in such a dramatic change in the urban landscape each year, they are often reported on in the news and, more recently, in social media posts,” she said.

“We mined these sources to compile a list of flowering dates of jacaranda trees spanning 1927-2019.”

These records allowed researchers to confirm the advance in flowering dates, quantifying a mean rate of advance of 2.1 days per decade.

The flowering took place against a backdrop of warming temperatures, ranging from 0.1-0.2°C per decade (daily maximums) and a more rapid 0.2-0.4°C per decade for daily minimums.

Japan’s world-famous tourist attraction, cherry blossom season, has been under threat in 2020 and 2021. Covid restrictions meant that international tourists keen to witness the ‘sakura’ were unable to travel. Those who managed to sneak in a tour in early 2020 may have found their timing was off. The data suggests the peak blooming date in Kyoto has been gradually moving from mid-April to the beginning of the month.

She Who Itches to Travel had a Japan trip lined up for 2020 to see the cherry blossoms, ride the bullet trains and, if not actually climb Mt Fuji, take photos from miles away and say we did. That this never happened was more about my tendency to procrastinate and worry about becoming destitute.

In January SWITT decided we’d left our run too late and postponed the 2020 trip to Japan’s autumn. I agreed, imagining parks blazing with autumn colours, all the while converting yen to dollars. Then Covid appeared and everything changed.

The Japanese have been studying phenological change for centuries, so they have a better handle on it than most. Cherry blossom flowerings last only a few weeks. They have been occurring earlier and earlier in recent decades.

The ABC reported in April this year that the famous cherry blossoms in Kyoto, Japan, peaked on March 26, the earliest date in 1,200 years, according to data compiled by Osaka University. Records that date back to 812 AD in imperial court documents and diaries show that the previous record was set in 1409, when the cherry blossom season reached its peak on March 27.

Kyoto experienced an unusually warm spring this season. The average temperature for March in Kyoto has climbed from 47.5 degrees Fahrenheit in 1953 to 51.1 degrees Fahrenheit in 2020. Japan’s national newspaper Mainichi reported that despite diminished human activity stemming from the COVID-19 pandemic, carbon dioxide levels in surrounding areas did not decrease.

Similarly, New Zealand botanists have observed the early blooming of the pohutakawa, often known as the country’s Christmas Tree. The pohutakawa, with its distinctive red flowers, usually blooms in mid-November through to early January. Early flowering north of Auckland was noted in October. News portal Stuff says the early flowering is due to a relatively dry and warm winter. This might thwart the gathering of kina (sea egg), with local Maori tradition of taking the flowering as a sign that the shellfish is ready to harvest.

As I said, I didn’t set out to do yet another climate change story, but it’s a bit ubiquitous. In the spirit of ‘do your own research’ I have provided more links which confirm what you have just read. As Greta Thunberg would say  “Wake up! Your house is on fire.”

Go out into the suburbs with your camera or phone and capture those luscious jacaranda blooms while they last.