Home Friday on My Mind The original FOMM travel articles 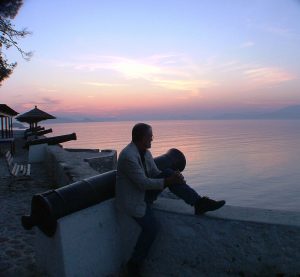 Just thinking about how much we love to travel (re: last week’s mention of Japan), got me thinking about how much we are missing being able to scratch our itchy feet. We are not the only ones. When it comes to having family or close friends living overseas, not being able to visit is particularly hard. We all know someone who has not yet met their new grandchild (in London or New York). We appeased the travel bug in 2020 and 2021 by taking month-long caravan treks in the outback, but it is not the same as travelling overseas.

An old family friend in New Zealand is having a few health problems and at 89, this much-travelled woman’s days of dropping in on friends around the world unannounced is probably over. It would have been good to just hop on a plane and turn up at the hospital. In her travelling days she was wont to describe her spontaneous arrivals as, ‘It’s just me, turning up like a bad penny.’ But we did send flowers.

Our friend went ‘backpacking’ in the 1950s with an intrepid Kiwi friend. They were both teachers and had a hunger to work their way around the world. Very few young women travelled alone in 1954, let me tell you. At the time my parents met them in Scotland (autumn 1954), they were out every day in the back blocks of Montrose, picking potatoes, saving up for their next travel adventure. Dad read a story about them in the local newspaper, tracked them down and invited them to stay for the weekend. He’d been thinking about emigrating for some time and had noted they came from the district where he had been offered a job. They became firm friends and of course that was the genesis of our emigrating to New Zealand in 1955.

Our old friend used to send me stamps she’d collected in her travels (the US, Vietnam, the former Yugoslavia, South Africa, Spain, Sweden Switzerland, Sarawak, the Solomon Islands, to name a few). The album is still in the bookcase here. It’s not worth much money but it brings back treasured memories. Once I reached my 20s, I felt compelled to leave NZ on what was then known as the “OE” (overseas experience). But you were supposed to go to London, go drinking with other Kiwi and Aussies in Earl’s Court and head home once your money was spent.

It didn’t always turn out like that. Young Kiwis or Aussies travelled, met their true love and settled in foreign climes. Serious travellers worked out the only way to keep travelling was to learn a bit of the local lingo and wangle a job. In France I picked grapes (the Vendange). After 10 days of dawn to dusk picking, I could barely get out of bed.

Later I landed two part-time jobs in Edinburgh, where I lived for six months in a bed-sit. The three-hour shift cleaning a department store before it opened was easy work and we got a free cooked breakfast. The evening shift cleaning offices went from 5pm to 8pm. Those two gigs helped pay my rent and grocery bills and at weekends we’d go adventuring in the highlands or south to the Lakes District.

I recently discovered a folder of travel articles from 2004, when we swapped houses with an English couple and spent six months living in a village in Surrey. Work wasn’t going so well, so I took all the long service leave and holidays that were owing and absented myself for six months.

It’s intriguing now to look back on these rambling emails to folks back home as the forerunner to Friday on My Mind. My then-colleague Jeffrey Sommerfeld had developed a weekly email to hundreds of our contacts (he was so pre-Twitter). He tells me now that so many of my contacts asked after me (in a kindly way), that he forwarded our unedited and sometimes rambling accounts to family and friends. They loved being kept in the loop about the adventures of Bob and ‘Mrs W’.

Here’s a nostalgic taste of how travel was before Covid and 9/11. I’ll follow up next week with our experiences of Hydra, a Greek Island best-known for once being home to poet and songwriter Leonard Cohen.

March 2004: TRAVEL can test the strongest relationship – just ask me. On second thoughts, don’t ask me because I don’t know my left from my right and can’t read a map.

My last bout of travelling in the 1970s was a solo effort, one last fling with tepid youth, if you will. I was practising to be a writer so did not really care where my feckless, directionless kind of travel took me.

In 2004 Mrs W and I made a base in Surrey for six months and made periodic forays to “the continent” as the Poms say.

I persuaded Mrs W to start with three weeks in Greece, nurturing warm memories of that stark country and its beautiful islands as a friendly and laid-back travel experience.

We flew via Singapore, arriving in Athens at 6am in that slightly stunned and disoriented state that flying in a pressurised container for 12 hours can induce.

The first stage of our adventure went without a hitch, lugging our (considerable) baggage on to the airport bus, arriving in central Athens about 8.30am.

I identified the Metro sign across the road and off we went. Much of Athens was a building site at the time, as the city prepared for the Olympics.

The escalators were out of order that day so we lugged four bags and a guitar down four flights of steep stairs to the (new) Athens metro station at Constitution Square.

On arriving at the right stop (Monistraki), I discovered there were five exits and I had no idea which one would take us to our hotel!

So there we were, us and our baggage, on a busy, dusty street, trying to decipher the tiny print on my (photocopied) local map. Mrs W was by now unimpressed with my forward planning. She was also discovering that my claims of knowing the language (after seven days on a Greek cruise ship in 1973), as complete bollocks.

Did I say we were in this situation largely because we had pledged to use local public transport and eschew taxis unless absolutely necessary? I used my mobile to call Hotel Tempi which I had pre-booked for three nights. Friendly host Yannes said we were just two streets away from the hotel “is easy – Parakalo.” but we turned right instead of left and took a very circuitous route via the fish market, across a road jammed with trucks, cars and two or three hundred motorcycles, carrying and dragging the baggage we needed en route to six months in the UK (which we did not get to until April).

Fortunately, our host encounters grumpy, jet-lagged tourists each and every day so was able to calm us down and send us to our room with the promise “I bring bags later”.

The hotel stored our bags (“no charge, is easy”) while we toured around southern Greece, starting with three days on Hydra.

In three weeks of exploring Greece on public transport and on foot we got lost many times: the big question for couples travelling on a budget to ask themselves is – does it really matter? As the Greeks would say “chalárose kai apólafse” (relax and enjoy).

Next week: A donkey ride on Hydra