A Free Education – the Whitlam Legacy 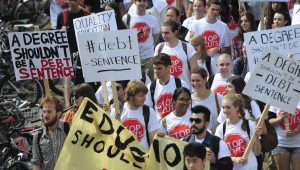 I will be forever grateful to the late Gough Whitlam for allowing me an opportunity to pursue a free education. I was 30 at the time with no qualifications and a chequered work history. My future lot in life was looking like casual labourer/dish pig. Not that there’s anything wrong with good honest sweat of the brow. But my undoubtedly sharp mind was frustrated by menial work and I was at a roadblock.

At the time unemployment was high and I was struggling to find any kind of work. I’d left school at 15 and had been in constant employment ever since, most of it unsuitable, apart from a three-year stint as a trainee psychiatric nurse.

Then came the concept of a mature-age tertiary degree or the prospect of studying screen-writing at the Australian Film & Television School. The latter proved a hard nut to crack, so I opted for a three-year course in journalism and media studies. What a journey. There were four school terms in a year at the time, so I figured by Easter of the first year I’d know if I could cut it or not. My results were mostly A’s and B’s so I knuckled down to full-time study, hammering out assignments on an ancient Olympus typewriter picked up at a police auction.

My student colleagues wasted no time explaining the privilege of a free university education. In 1974 it had been ushered in as one of the first in an astonishing array of social policy reforms by one Edward Gough Whitlam, without doubt our most controversial politician.

Yesterday was Remembrance Day but also the 46tht anniversary of The Dismissal, the fateful day in 1975 when the Queen’s representative in Australia, John Kerr, sacked a sitting Prime Minister. Gough Whitlam came to power in 1972 with the memorable campaign ‘It’s Time’. And it most certainly was. In a few short years Whitlam and his government dragged Australia out of a 1950s mindset into the era of afros, paisley shirts and flared jeans.

Most people under 50 are unlikely to know this story unless they studied law, politics or social policy at university. On Labor’s election, Whitlam and his deputy, Lance Barnard, formed a duumvirate (a two-man cabinet). They then spent two weeks working on a massive amount of draft legislation. If you are of my generation, I suppose your life experience will dictate what you think is the crowning achievement of these social reforms.

For me it was a free tertiary education. For women (or men) going through an ugly divorce, it was the single-parent pension.

Regardless of a ‘free’ education, the life of full-time student was a pauper’s existence, devoting most of our time to qualifying for a job-related degree. I recall doing a deal with the university bookshop and my local dentist to pay off my debts in instalments. Meanwhile, I played guitar in a bush band, worked as a free-lance journalist and took casual jobs when I could.

It is now 32 years since free tertiary education was scrapped by Bob Hawke’s neo liberal Labor government, to be replaced with the Higher Education Contribution Scheme (HECS). While Whitlam’s nemesis, Malcolm Fraser, tried ending free education in 1976 and again in 1982, it was Hawke who killed it off in 1986 by introducing a first-ever student fee. The Hawke government abolished free education by stealth, first with the $250 admission fee when students enrolled, then a fee system for international students before progressing to HECS in 1989.

The scheme began modestly, charging students a ‘proportion’ of the cost of their education. This morphed into open slather in 1994 when Labor allowed universities to ‘charge what the market would bear’, for tertiary courses.

As Tom Fiebig wrote in the socialist newsletter, Solidarity, a typical university student today will graduate with a $20,303 debt. Some 150,000 students now have more than $50,000 in debt.

Under HECS, students were given interest-free student loans, most predicated on not being due for repayment until one’s income reached a certain level.

So that was just one little thing that Whitlam and Barnard did, not nearly as universally acclaimed as the Medicare model. There was so much more: they abolished conscription, ended capital punishment, introduced no-fault divorce and a single-parent pension and started talks on Aboriginal land rights. There was equal pay for women, Legal Aid, the Federal Schools Commission, major subsidies for the arts and the National Sewerage Scheme, which put an end to Australia’s night cart collection system. While we are still today debating the need for an appropriate anthem, Gough got things started in 1972, giving God Save the Queen the flick and opting for Advance Australia Fair.

Whitlam finished our involvement in the Vietnam War, bringing the Australian Army Training Team home. Most troops, including conscripts, had already been withdrawn by his predecessor, Billy McMahon. What is not so well known is that when abolishing conscription, Whitlam arranged for the release of seven men who were in jail for refusing to go to war.

As one might expect when a new leader is stirring up a stagnant system, Gough Whitlam had his critics. He was hardly to blame for the 1970s global oil crisis, rampant inflation, lengthy recession and massive unemployment. But those disruptive events made Whitlam an easy target for those who successfully branded his government as poor economic managers.

I have chronicled many of these events in a song, ‘When Whitlam took his turn at the wheel’, which we posted on Bandcamp yesterday.

I did not have room for a verse about the ‘Blue Poles’ incident. Whitlam had opened the National Gallery, which wanted to purchase a modernist painting by Jackson Pollack. The asking price was $1.3 million (at the time a third of the gallery’s annual budget). The gallery director needed the PM’s personal approval. Although he did not need to make the purchase price public, Whitlam did so, creating a political and media scandal. Alternatively, it symbolised his foresight and vision (or his profligate spending). In 2016 there was a fresh furore when Victorian Senator James Paterson urged the government to sell Blue Poles (citing an insured value of $350 million), to reduce debt.

A fine orator and debater and a compelling public figure, Gough Whitlam went well on the international stage. He was the first PM to visit China, but as the song says – ‘today nobody knows’.

Here’s a short transcript from an interview with a sympathetic community radio station.

Natasha: Welcome, Comrade. So what made you think about writing this song, Bob?

Bob: Well, Natasha, I read a few stories recently which observed that it was the 7th anniversary of Whitlam’s death. I started thinking about the legacy that he’d left and how today’s generation is probably blissfully unaware of his achievements”.

Natasha: You have written in a previous episode of FOMM that you met Gough one time and that it did not go well?

Bob: I made the mistake of handing him my card from the Courier-Mail where I was employed as a business journalist. He looked at the card, made a scathing comment about the newspaper’s campaign against historian Manning Clark, gave my card back, turned and walked away.

Natasha: You don’t mention that in the song, although you do take a swipe at Gough’s vanity?

Bob: Yes, he probably would have thought the song was about him.

Natasha: Thanks, Bob Wilson. This is Socialist Songs Hour and here is that song, When Whitlam took his turn at the wheel.

You can listen to the song on our Bandcamp page https://thegoodwills.bandcamp.com/ and if you like, add it to your digital music collection. Share with your friends.