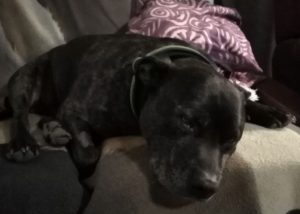 Nibbler feeling blue after a visit to the vet

Over the past six years, I have written at least 20 blogs about mental health and my particular affliction, anxiety/depression. The Black Dog Institute says one in seven Australians will experience depression in their lifetime. It carries the third-highest burden of disease (in terms of cost to the community), in the country.

So if it has never affected you, be aware. The Black Dog can sneak up on you, as we can see:

And those were the statistics before the pandemic came along in March and set anxiety and depression loose.

To its credit, the Australian Government stepped up in August to offer people an extension on the subsidised specialists’ scheme.

Under Medicare, a GP can refer you to a psychologist or other mental health specialist under a plan which will pay $124 per session for a maximum of 10 sessions a year. This means if your counsellor charges $165 (the going rate for a clinical psychologist), you will be $41 out of pocket, or $410 over the course of treatment.

The Federal Government extended the scheme by an additional 10 sessions for people whose plan had run out, and whose lives were directly affected by COVID-19 lock-downs.

The front line treatment of a mental illness like anxiety and depression is medication, counselling and cognitive behaviour therapy. The latter means trying to change your reactions to things that trigger your moods. Increasingly, GPs and specialists will try other methods before they resort to medication. It depends if your mood disorder is bio-chemical or triggered by trauma or personal circumstances.

I recently read the biography of now-retired rugby league great Darius Boyd, who spent the latter half of his career in therapy and then became a mental heath ambassador. For much of this season, social media trolls posted nasty things about Darius, whose form fell off (as it can do with players past their peak), as also happened to his team, the once-mighty Brisbane Broncos. Darius now spends a lot of his time as a mental health ambassador, important work when you consider that 72% of men do not seek help for mental health problems.

Men are also at greatest risk of suicide but least likely to seek help. The Black Dog institute says that in 2011, men accounted for 76% of deaths from suicide. Other groups at proportionately higher risk include indigenous Australians, the LGBTI community and people in rural and remote areas.

You may know that this is Mental Health Week, which includes community activities to bring these still-stigmatised illnesses into the daylight. There’s the One Foot Forward initiative, where people volunteer to walk a certain number of kilometres through October and raise money through sponsorship for the cause.

An Australian survey of 5070 people found that 78% said their mental health had worsened during COVID-019. One in four were worried they would be infected and one in two worried that families or friends would be infected. Psychological distress levels were higher, with raised levels of depression (62%), anxiety (50%), and stress (64%).

A World Health Organisation report in May warned that significant investment in mental health support was needed owing to COVID-19. Those at particular risk of COVID-related psychological distress include children, women minding children and/or working from home, older people, those with existing mental health disorders and front-line health-care workers.

Depression, or what Winston Churchill famously dubbed the Black Dog, comes and goes, whether you take medication or not. The severity might be dampened down, but you still don’t want to get out of bed or finish reading the second or third book you started.

I find walking, bird-watching and playing guitar the best diversions and, surprisingly given my tendency to introversion, I rarely knock back opportunities to socialise, even when I’m feeling off the boil. It’s not quite ‘snap out of it’ – unhelpful advice too often doled out by people who don’t understand mental health – but it is something.

If you could capture the molecule that for no reason decides to tell your brain “ wake up, you are no longer depressed”, I’d bottle it and give it away free to fellow sufferers.

Periods of respite come along; I felt momentarily cheered when a young friend told me she was with child for the second time. I was cheered further when seeing my fledgling rose garden start to bloom. Cheerfulness came with two snail mail letters, one from a friend in her mid-80s, who wrote a long letter for my birthday, which she never forgets. She befriended our family in Scotland (I was five) before we emigrated. Mary posted the letter in New Zealand on September 22 and it turned up on the 14th October – just one example of how COVID-19 has broken down communications with family and friends.

I know people who have new grandchildren they are yet to meet, and people who would have liked to be at particular funerals and could not go. Then there were the people who could not visit a loved one who was dying of the virus because of restrictions on hospital visits.

So yes, snap out of it indeed.

But then I accidentally tuned in to ‘Dr’ Trump, self-diagnosing himself as ‘immune’, followed by the Gladys and Daryl fiasco, which tipped me back into the pit. I’m also aware that the passing of my peers – loved ones, friends, acquaintances and fellow musicians – remind me that I’m nearer the end than the beginning.

So I was sad to hear that Irish songwriter Kieran Halpin had died aged 65, and offer this brief tribute. Kieran, who graced our lounge room on several occasions, was a dedicated FOMM reader. He sometimes emailed to say how much he enjoyed particular outback travel pieces. A long while ago, Kieran and family spent a year touring Australia in a motor home, guitar in back. He loved the wide open spaces and the starry nights of the outback and drew inspiration there. An inventive and prolific writer, he had the happy knack of writing songs that other singers wanted to cover. Kieran’s songs like Nothing to Show for it All, Angel of Paradise and All the Answers were covered by artists including Delores Keane, Vin Garbutt, Niamh Parsons, The Battlefield Band and Dutch singer Ilse De Lange. As is often the case, the songs were better known that the man who wrote them.

Cos when I hear the siren wailing

I see the flashing of the light

I may not have all the answers no

I wouldn’t have it any other way