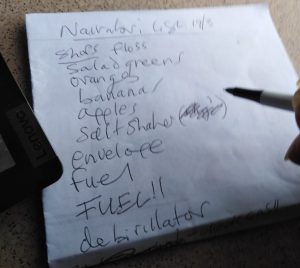 This week let’s turn to the universal topic of lists and list-making.I instinctively feel that readers are ripe for a light-hearted look at something that’s not about Russia, the threat of nuclear war, the price of fuel or a new Covid strain.

I take issue with the medical journal articles that define excessive list-making as an indication of obsessive-compulsive disorder (OCD). The fact that I re-wrote these two paragraphs 10 times is no real indication.

List-making is a solid aid to achieving goals and being efficient. Crossing items off the daily list is not a case of clinging to a way of remembering things. I just find it useful. What is not useful is when you are leaving the house (with list in pocket) and your partner calls out “get some gluten free bikkies that don’t have soy in them”. Never going to happen. It wasn’t on my list in the first place so doesn’t qualify.

Since the last time I wrote about list-keeping (2018), I have tried keeping separate lists relevant to the five or six key interests in my life, but that system became completely shambolic after a while.

So as per past habits of managing a busy life, I rely on a paper diary, an electronic task list and a small red notebook in which I list everything I’m meant to do that day.

If you too keep lists as a way of getting things done, having you noticed how the distasteful or low-priority tasks slip to the bottom or even off the page? Give dog bath usually gets skipped for a few days (added the un-completed tasks to the next day’s list).

As the subject of lists is up for review, I’d have to say they are essential when planning a lengthy caravan trip.

Fair dinkum, you’ve no idea. First you need the 10-point leaving and arriving check lists (ours is in 20-point text and laminated), so you don’t drive off with the stabilisers down or the power cable still connected to the box. Stuff like that.

Then you need a laundry list, a pantry list, two personal clothing and effects lists, a gadget list, and an ‘essentials’ check list which includes checking tyre pressures, making sure the gas cylinder is full and that there are matches and toilet paper in the van (not much use left at home on the kitchen bench). It also helps if you take the ‘dongle’ that allows you to do electronic banking along the way.

Most of you are familiar with the term ‘bucket list’ which was invented by the tourism industry to encourage people to try skydiving, bungee jumping or going over Niagara Falls in a barrel.

It took no time at all to find a list of bucket list songs swirling around on the bottom of that virtual music bucket, Spotify. Here you will find examples by songwriters including Charles Beckerson and Owen Moore. I’d never heard of them and I’m sure they have never heard of me.

Writer Sasha Cagen took list-making to the wider world, first with a blog and then with a book, To-Do List: From Buying Milk to Finding a Soul Mate, What Our Lists Reveal About Us. As Cagen explained to NPR’s Diversions radio programme, it started in 2000 when she started publishing a magazine called To-Do List.

“The idea was to use the to-do list as a metaphor for all the things that we have to do to feel like we’re grownups.”

Cagen was interviewed in 2007, the same year Morgan Freeman and Jack Nicholson starred in the dreary Bucket List, a film by Rob Reiner. The story involves two terminally ill men (from opposite sides of the track), with six months to live. They decide to explore life and make a bucket list.

Popular culture aside, the website ocdtypes.com has some pertinent things to say about the tendency for people with OCD to keep excessive lists to remind them of their daily routines.

“Research has shown that people with OCD do not have memory problems, so the lists are actually unnecessary. List-making would be considered a compulsion because the list reassures the person with OCD and helps them to feel temporarily better.”
I suppose this depends on your definition of ‘excessive’; for example ‘brush teeth, floss, polish shoes, iron shirt, put ironing board and iron back in cupboard, transfer lunch box from fridge to briefcase, kiss wife, leave’ is a wee bit over the top. You could in theory do all of this without having a list (although you left the ironing board sitting in the laundry).

A lot of lists are about people competing to reach the top of the list. Most domestic lists, by comparison, are about the efficient running of a household and equitable division of labour.

Other people’s lists (like a list of parks and reserves the local Council may or may not sell), can have a detrimental impact on our lives.

Despotic leaders have their hit lists and dispatch assassins with poisonous umbrellas and marker pens to cross their enemies off the list.

There is a top 10 endangered world heritage sites list – unsurprisingly most of them are in countries that have been split asunder by civil war. Australia managed to get on this list, however, by not taking care of the Great Barrier Reef. It’s not as if we didn’t know.

The entertainment industry absolutely loves lists, and if you are ranked number one, they will create a whole industry around you (until someone else becomes Number One). The same goes for pop music, professional sport and politics.

The world is enslaved to lists if you think about it; grand literary contests like the Booker Prize go from long lists to short lists, ditto the Academy Awards and song writing competitions. Panels appointed to review job applications or ministerial candidates also use the list system.

The traditional ‘bucket’ list usually contains travel adventures, dare devil pursuits and sometimes unattainable goals. Here’s a verse from my song, Another Year with You. How many of these things have you crossed off your list, eh?

My friends are doing marathons or they’re jumping out of planes,

The rich ones flew to the Kimberley; the poor ones caught the train;

Some heard Pavarotti sing that famous aria in the park

Swam naked with the dolphins, went croc-spotting after the dark;

Climbed Uluru at sunrise, dived for pearls at Broome,

Asked women far too young for them to come back to their room.

I’m a sucker for a list. “The Rough Guide Book of Playlists” is irresistible, for example. Julian White’s rocklistmusic.co.uk collects those music magazine lists: 10,000 Best Songs in the Universe, that kind of thing. He also has such miscellanies as Banned Recordings (most of them by the BBC).