Bushfires, Methane and the Climate Crisis 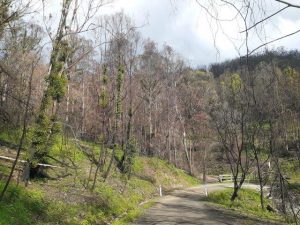 You’d think those with an interest in promoting the climate crisis would have made more of James Murdoch quitting the family media business.

While there is much to be wary of when considering Murdoch Jnr’s defection, he did make it crystal clear that he and his wife Kathryn disagreed with News Corp’s climate agenda. The first real signs of family business friction emerged last year. James accused News Corp of promoting climate denialism during its coverage of last summer’s Australian bushfires.

University of Sydney professor Rodney Tiffen’s thorough examination of James Murdoch’s chequered history points out that it was James who first persuaded Rupert Murdoch (in 2006) to embrace the climate change cause. While Rupert soon drifted away, James remained committed. Tiffen makes a trenchant point, that Rupert’s conversion had little impact on the company’s journalism:

“Its upper editorial echelons contained a large number of climate denialists, and Rupert seems to have never made any effort to change their views.”

This is an interesting read if you want to be reminded of James Murdoch’s role in the UK phone hacking scandal and management of News Corp’s global satellite TV business.

Despite the claims about climate denialism within News Corp, its Australian flagship has kept up with the topic. You won’t be able to read about it unless you subscribe, but Erin Lyons filed a story on July 29 from a Senate inquiry headlined ‘Unequivocal link between extreme bushfires and climate crisis’.

I note with interest the use of language officially adopted by The Guardian to describe climate change as a ‘crisis’.

Lyons quoted Bureau of Meteorology chief executive Dr Andrew Johnson who said a rise in global emissions was driving up temperatures, which was likely to increase the risk of bushfires.

“Bushfires are starting earlier and ending later. There’s a climate signal in that,” he told the panel. “How that plays out in the future will very much depend on how humanity responds.”

Lyons followed up next day with a story about firefighters and bushfire survivors calling for the fossil fuel industry to pay for the damage.

Almost on cue, the weather map showed the first signs of an early bushfire season, with large swathes of central Western Australia painted red for danger. In southern California, not all that far as the crow flies, the northern summer’s first forest fire forced thousands to flee their homes south of Los Angeles. Here we go again: “There’s always been bush fires.” (Climate change deniers drag out last year’s talking points). No, it’s because of the dangerous build-up of methane in the atmosphere. (Ed: He said, interpreting science, which is a danged dangerous thing for a journalist to do).

The thing is, such is the media pre-occupation with COVID-19 and the risks to Australian (and global) economies, the topic of climate change barely gets a look in. Allow me to fill in the gaps and maybe do a bit of fact checking while I’m here.

My attention was dragged back to this subject when reading a four paragraph filler in The Guardian about methane. Animal farming and fossil fuels have driven levels of the greenhouse gas to the highest on record, it stated. The Guardian cited the Methane Budget study, published by Earth System Science Data, which stated that discharges of methane gas have risen about 9% on the 2000-2006 average, to 600 million tonnes a year.

It’s no easy task, quantifying methane emissions, which occur naturally in wetlands and inland water sources, but also from biofuel, waste, coal mining, oil and gas production and agriculture. A global team of more than 90 researchers from 70 institutions contributed to this latest update. Ironically (well, I think it’s ironic), melting permafrost contributes to the release of methane.

The increase of atmospheric methane is important, in that its global warming potential is estimated to be up to 34 times higher than CO2 (over 100 years). That’s why you will see large-scale industrial plants like oil refineries burning off methane (converting it to CO2). Besides, methane build-up within an industrial complex can be quite lethal because of its explosive nature. Major oil companies including Shell and Exxon made commitments several years ago to cut methane emissions by up to 15%. (I read that 2018 report in The Australian, while fruitlessly searching the database to see if it had published anything about the Methane Budget study). The most recent reports involving methane were to do with the explosion at the Moura coal mine.

As we were saying at the outset, James Murdoch’s resignation from the board of News Corp came with a statement in which he castigated the chairman (Dad) and the company over its climate change denialism. It’s not so much about bias as choosing which stories to cover (and when) .

While the Methane Budget study might be deemed by editors of mainstream tabloids to be ‘boring as batshit’, nevertheless its key findings were reported by outlets including the ABC, Washington Post, The Guardian, the Straits Times, Nature and quality monthlies that report on science. There is a good analysis by carbonbrief-org where the key points can be grasped by the lay person. Methane is often ignored in climate change discussions, despite having a more deleterious effect than CO2 (more carbon per molecule) – thanks Dr John.

One thing I missed on the first read through was that South East Asia and Oceania were in the top three regions for recording increased methane emissions. Global methane emissions were 1875 parts per billion at the end of 2019 – two and a half times higher than pre-industrial levels.

Why this topic caught my attention was an awareness, given a wetter winter than usual (building up fuel loads), that we could be heading into an early bushfire season. This was the case in 2019, with the first reports of serious bushfires alerts emerging in early August.

Those engaged in fire fighting know why bushfires are getting earlier and nastier. A report by volunteer firefighters published in the University of Melbourne’s Voice magazine in early 2015 flagged a few warnings about bush fire prevention. It also cited the role of bushfires in escalating the release of methane and CO2 into the atmosphere.

The study authors found that levels of carbon and greenhouse gases released in Eucalypt wildfires could be reduced by fuel reduction burning, or planned burns conducted prior to the bushfire season in high risk forests.

“The results of these actions could inform land management decisions as well as government policy regarding planned burning. Also, it could enable more accurate estimations of the contribution that bushfires make to Australia’s National Greenhouse Gas Inventory.”

As we head into the spring of 2020, I can but offer this insight on the left and right of politics, still bickering about hazard reduction burning (and whether it works or not). What was that about Rome burning?