Keeping your distance – way out west 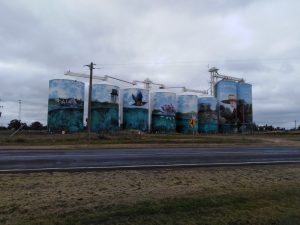 There’s a misleading headline for you – ‘way out west’. At best we were 400 kms from home at any one time. All the while, though, we were keeping our distance, as Premier Annastacia Palaszczuk encouraged us to do. Regardless, she also said we should to go forth and do tourist things in the State of Queensland. Spend money and support our small towns, the Premier said, while reminding us to meet COVID-19 restrictions. These include keeping 1.5m distance from other humans, washing your hands at every opportunity and avoiding Victorians like the plague. (I added that bit, just for a bit of colour.)

On the first day, we stopped for the few minutes it takes to navigate into the viewing enclosure built so tourists can enjoy the art work at the Yelarbon silos (above). The last time we drove from Warwick to Goondiwindi, this controversial project had not been completed. I include this link not to rake over old coals, rather to showcase the solid regional reporting that is at risk now that so many country news outlets have been shut down or relegated to online-only.

Before Yelarbon, our first stop on a 10-day circuit through western Queensland was Inglewood, where a wind chill made the noon temperature of 12 degrees feel like 5. We stopped at the Shot 2 U cafe for lunch, since our first day out was a day off for the cook. This cafe was serving takeaways and limiting the numbers of people who could be in the building at the same time. She Who Prefers Gluten Free found that this cafe ticked all of the boxes so we bought a container full of gluten-free, dairy-free brownies. It’s like the Premier keeps saying – go out into these small towns and spend some money. That’s not what they are saying in other States right now, but on the other hand, Queensland is/was COVID-free.

On we travelled to the Moonie Crossroads Roadhouse, where we parked our van and adjourned to the lounge for whatever was on the menu, while keeping our distance. The German tourist who works behind the bar happily found and served a piccolo of bubbles to celebrate Bastille Day.  Next day, we set off on a short drive to Glenmorgan and Myall Park Botanic Garden. This 132ha property is privately owned and operated by a trust and contains many Grevillea species, bred and cultivated by the Gordon family. They named the best known of these species after their daughters – Robyn, Sandra and Melinda. It’s a wonderful little oasis of native flora and fauna which last year was at risk because of the effects of ongoing drought. Some 300mm of rain in February helped the property bounce back. 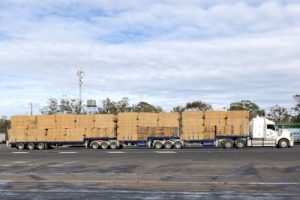 On our trek through Moonie, Glenmorgan, Roma, Theodore, Kilkiven, Maleny, Brisbane then home, we were followed in part by three single women of a certain age who decided on a short road trip for much the same reason as we did, ie to ‘get out of the house’.  They travelled together in one car, stayed at motels, ate in restaurants or cafes and spotted rare sights like this ‘B-Triple’, on the road. (photo by Sandra Wilson).

Also taking a break from four walls were Brisbane friends we bumped into by serendipity in the small river town of Theodore. Like us, they had decided to get away from the house for a while. Many of their regular activities have been curtailed so as we all know, after a month or two of living under one roof, you get a bit stir crazy. After a spontaneous picnic lunch, and keeping our distance, our friends continued on towards Winton.

In Theodore, where we spent a couple of nights, we spotted four vehicles with Victorian number plates. Theodore has a police station, so you’d have to assume they have been checked.

Nevertheless, anxiety-tainted emotions arose; worries about contagion, proximity and the fear of the unknown. Hypothetical worries maybe, but you never know. Perhaps those with Victorian plates had been in Queensland since March, or earlier.

Some Grey Nomads, particularly those from colder climes, spend a lot of their winter north of the border.

Other travcllers seem to be worming their way into the State and not caring too much about leaving an accurate trail. Last I checked, there were still 185 people ‘missing’ after filling in forms at the NSW/Qld border. They are all supposed to be in quarantine for two weeks, but many still cannot be found. This implies that they used fake registration and/or address and contact details. Police have arrested several people this week, so we will watch the story unfold when they appear in court in September.

Crikey, as we say here in Australia when we really mean WTF. It would only take one contagious person to go into a licensed bar or restaurant and the viral ball would start rolling again.

I wondered if the authorities at border control are scanning drivers’ licences, as routinely happens when you go to licensed clubs. Or would this infringe our civil rights?

On the way to Theodore, we stopped off at the Isla Gorge lookout. If you want to climb down into the sandstone gorge and go exploring in this national park, you need to check in with the ranger, take a detailed map and make sure someone knows what you plan to do.

As it stands, you can pick your way carefully along a steep, unfenced track to a viewing point, but venturing further is only for the brave and thoroughly prepared tramper. You can stay overnight, but you need a permit and must be self-sufficient.

Everyone has their own comfort level when travelling. I spotted a young couple, rugged up and huddled around the camp fire at a Roma farmstay, before retiring to their little dome tent (as temperatures approached 5 degrees. At Wandoan we chatted briefly to an older couple in a little car who were exploring the Showgrounds as a likely place to camp. As we were setting up our caravan (and connecting power), the couple put up a small tent, table and chairs and a portable barbecue. It got to 3 degrees that night, so no, we were not keeping our distance!

If you want to go bush but feel like you need a guided tour with all the creature comforts, refer to Everald Compton’s recent blog). He and his wife Helen recently took time out for a bush holiday. Everald was born in 1931, so those of us who like to go bush with a swag and a nylon tent can excuse him a bit of luxury. They joined an organised tour with Nature bound Australia, a bush touring experience, where guests are ferried around in the operator’s four-wheel drive.

“We chose how many days we wanted to go on tour with them and agreed on an itinerary, after we had interesting advice from them about the many options that rural Australia offers. None of our chosen destinations had yet experienced COVID19.”

“Our itinerary took us on back roads through delightfully small communities and our accommodation was in bed and breakfast homes on farming and grazing properties, with other meals at wineries and quaint cafes in interesting places.”

Everald concluded that the bush adventure proved to be the right antidote for COVID-19 angst.

“A good bush holiday is all about reconnecting to nature and the guiding restorative power it has on our lives,” he wrote.

I’m sure our friends, creating their own versions of a bush adventure, would entirely agree. Just avoid interstate vehicles and, if someone wants to shake your hand, use hand sanitizer before you touch anything else.