Why we need an annual twins day 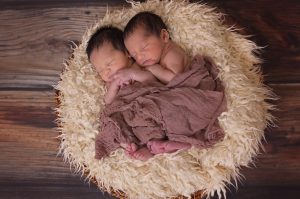 As a Dad of one, it quite does my head in when I read about blokes whose wives presented them with twins, triplets or more. Such fun!

It seems that if you are good looking and in good shape when you hit late teens, there’s no end to the opportunities in the US when it comes to music, movies and TV series.

A recent post by Insider ranked 15 sets of twins by their achievements in film and television (and professional wresting). Typically the post focused on American celebrities, although you are probably already saying, “what about the Veronicas?”

Not that I watched too many episodes of the series Full House (1987-1995), but I was never aware that the child role of Michelle Tanner was played alternatively by identical twins Mary-Kate and Ashley Olsen. The sisters went on to star in movies and sit-coms and lent their names to a range of merchandise. They are quite wealthy.

Twins Oliver and James Phelps played the Weasley twins in all eight Harry Potter films, Good work if you can get it. Identical twins Aaron and Shaun Ashmore are so difficult to tell apart I can’t say for sure which brother played the role of Jimmy Olsen, Clark Kent’s best friend, in four seasons of Smallville.

There is even a sit-com called Sister Sister featuring real-life sisters Tia and Tamera Mowry.

And it may not be widely known that Elvis Presley had a twin, Jesse Garon Presley, who was stillborn.

When you’re a fraternal (non-identical) twin, it doesn’t always follow that you align to your brother or sister’s life. For example, former Federal Opposition leader Bill Shorten has a twin brother, Robert, who is an investment banker.

Actress Scarlett Johansson is one of a set of fraternal twins. Her brother Hunter starred with her in one movie, but left show biz to work for Barack Obama as a campaign advisor.

The topic arose as my sister in New Zealand prepares for her quota of great-grandchildren to be doubled overnight. The new twins are expected next month, so there’s great excitement in an extended family which so far has no experience of multiple births.

One of my younger friends in Brisbane told me in 2007 that his wife was expecting twins. It was their first attempt at having a family and Marcus  was quietly freaking out.

“At the first ultrasound I remember the doctor saying, ‘There’s a heartbeat’ and I got a big smile on my face. A few seconds later the doctor says, ‘Hang on, there’s another heartbeat’. I was still smiling. The doctor then says – ‘I will just check for another’”.

Always an early riser, Marcus well remembers adjusting his work life to starting at 5am or earlier so he could be home to help at the other end of the day.

The couple had fraternal or dizygotic twins (a boy and a girl), which results from the fertilization of two separate eggs during the same pregnancy. Fraternal twins may be of the same or different sexes and are not identical.

“They don’t have the same connection as identical twins, but because they’ve been together from the start, they are very close,” Marcus said.

“We were fortunate with our two (now 14) as they were placid babies.

“We’d always talked of having three or four children. But the intensity of having two at once changed our thinking.”

Marcus admits to having a ‘bond’ with other parents of twins and is immediately drawn to them.

“If I see someone with a twin pram, I almost always fall into conversation with them.”

Identical or monozygotic twins occur when a single egg is fertilised then splits into two, creating identical babies with the same genes, physical features and sex. There is also such a thing as ‘mirror twins’. According to www.twinstrust.org, one child could have their hair parting on the left and the other child on the right. They may also have birthmarks on opposite sides of their body or be right and left-handed. The chances of having identical twins are about 3 or 4 in every thousand births.

Australia also has celebrity twins, including the aforementioned musical duo, The Veronicas, Lisa and Jessica Origlias. Although the sisters spend most of their time in the US, they were raised in Queensland. Identical twins Alanna and Alicia Egan are part of the Australian folk and acoustic music scene and are regulars at folk  festivals.

The Morris brothers (Brett and Josh) were high-profile rugby league players for more than a decade before retiring last year. The identical twins started off playing for the same team (Canterbury Bulldogs). It wasn’t until they were older and playing for different teams and their hair started thinning that you could tell them apart. Both played for their State and National teams and were prolific try scorers.

Celebrity twins are thin on the ground in New Zealand, although the internationally known entertainers, The Topp Twins, might disagree. More recently, Amber and Sarina Shine have become known on social media as the ‘wild twins’ for their daredevil outdoor adventures.

There’s a serious side to the topic of multiple births. Twins Research Australia (TRA) undertakes and supports twin research in institutes and hospitals across Australia and globally. TRA, based at the University of Melbourne, has 75,000 twins as members.

An example of TRA’s work is the project started in 2020 to identify the prevalence of breast cancer in identical or fraternal twins.

TRA is working with volunteers to clarify the genetic and environmental risks of developing breast cancer among one or both twins.

Melbourne identical twins Raie Moss and Judy Kohn joined a study which seeks to explain why only one twin in a pair develops breast cancer, or if both twins are diagnosed, why one twin does so earlier.

Six years after Judy was diagnosed with breast cancer at 59 in 2013, her identical twin Raie received the same news.

“We’ve been able to support each other through some very dark times,” Raie said. “When we found out we could help others like we helped each other, we jumped at the chance.”

Most Australian twins would know about the annual Twins Days Festival in Twinsburg Ohio, which in 2021 attracted 16,000 sets of twins. Brothers Moses and Aaron Wilcox were instrumental in the town’s name change from Millsville after moving there in 1819. The summer festival has been running since 1974, albeit with a year off in 2020.

TRA’s Lynette Walker said the Ohio festival was “amazing”. TRA has previously organised similar events including the 2015 twins and other multiples festival, held at Caulfield racetrack in Melbourne. In 2021 they took the event on-line to celebrate the organisation’s 40th anniversary and to raise funds.

The interactive evening included performances by Australian musical twins and a video message from TRA’s International Patron, HRH Crown Princess Mary of Denmark (herself a mother of twins).

As for the world’s biggest twins festival in Ohio, Marcus is already making travel plans!