Our Obsession With U.S. Politics 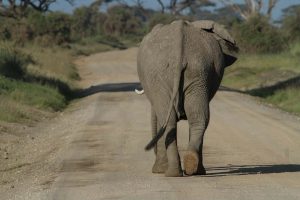 For reasons attributed to the way my mind works, the 1950s children’s song ‘Nellie the Elephant’ has been in my head for months now.

If the complete domination of the airwaves by the US election is getting you down, just sing this happy refrain:

“Nellie the elephant packed her trunk and said goodbye to the circus, off she went with a trumpety trump – trump, trump, trump.”

Yes, once heard never able to be un-heard.The song (Ralph Butler/Peter Hart) was first released in October 1956 by Mandy Miller and an orchestra conducted by Phil Cardew. (There’s also a 1984 cover by punk band Toy Dolls).

On Wednesday, every TV channel had live (and ongoing) coverage of the US election vote count, interspersed with snippets of local news. The blanket coverage continued yesterday and today. At one point we switched off and went out to sow grass seed and count birds.

This short discourse on our obsession with the US election begins with the obvious observation: “Why the hell should we care?” Surely we have enough problems of our own to solve without being mired in America’s divisive political miasma.

Media coverage of the US election this week (and what seems for a long time now), quickly relegated the triumphant third term return of Queensland Labor Premier Annastacia Pałaszczuk to a lesser position. It also relegated our own (small) battles with Covid-19 from top of the news, where it should be.

Covid and the obsession with events in Trumpistan lessened the usual impact of two major Australian sporting events. On Tuesday we had the Melbourne Cup, run without the usual crowd (100,000+); no outlandish hats, frivolity or drunken behaviour. Masked strappers led the horses in to the parade ring, while anyone within coo-ee of a television camera conspicuously wore a mask. This is Victoria, after all. The 2020 Cup was run and won, the day marred by the death of the top weight horse Anthony Van Dyck, which broke a fetlock and had to be euthanased. The other scandal from Cup Day, which added fuel to the ‘Nup to the Cup’ animal rights movement was jockey Kerrin McEvoy’s $50,000 fine for over-use of the whip on second-placed Tiger Moth.

Meanwhile in Adelaide, rugby league players lined up for the first of three State of Origin matches. The matches would normally have been held in May and June but this year, Covid restrictions forced a re-organisation of the classic inter-State contest.

The games are to be staged over three consecutive weeks; next Wednesday in Sydney then the following Wednesday, November 18, 2020, when Brisbane will host the third game and possible decider, depending on whether NSW wins next week.

There were other news stories this week which were not about the US election or Covid-19. Here’s a few you may have missed.

This issue dominated traditional media and social media alike for weeks, the focus being on the likelihood of Trump appointing a conservative judge before the election (which he did).

Prime Minister Scott Morrison last week announced the appointment of two new Justices to our equivalent forum (the High Court of Australia). Federal Court Judges Jacqueline Gleeson and Simon Steward will replace outgoing Justices Virginia Bell and Geoffrey Nettle. The latter are due to retire at 70. The compulsory retirement age was brought in after a referendum in 1977.

Unlike the politically charged US Supreme Court, Australia’s High Court judges are appointed by the Governor-General in Council (which means he suggests potential candidates to the Attorney- General and then the PM, who makes the appointments).

Mr Morrison thanked the outgoing justices for their work.

“Every justice appointed to the High Court carries a significant burden to uphold the laws of our land,” he said. “I congratulate Justices Steward and Gleeson and I wish them all the best.”

As this ABC report observed, our High Court process stands in stark contrast to that of the United States, where Supreme Court appointments are “fought tooth and nail in a politically charged atmosphere”.

An article in ‘The Conversation’ argued that Australians in general know very little about the workings of the High Court. The Canberra-based court and its panel of seven Justices is the last resort for civil cases which have been through at least one other legal forum.

The High Court’s independence is no better demonstrated by the recently decided case, Hocking v The Director of the National Archives. An academic, Professor Jennifer Hocking had sought access to the correspondence between former Governor-General Sir John Kerr and the Queen during Australia’s constitutional crisis in 1975.

The High Court held that Kerr’s papers were public record and not, as had been previously ruled, his personal correspondence.

The National Archives of Australia spent close to $1 million defending its position, an amount which could double after the High Court ruled that it pay Professor Hocking’s costs.

Even though a Pew Centre research report said 71% of Australians closely follow US news, it serves us better to be informed about domestic news. Start by following the High Court’s upcoming deliberations on Palmer vs State of WA over the ‘hard border’ closure.

The High Court of Australia is completely transparent (cases and judgements are available online). But as senior lecturer in law Joe McIntyre said in The Conversation article: “Whereas appointments to the US Supreme Court are a highly visible festival of political intrigue and showmanship, the process in Australia is a secretive affair occurring strictly behind closed doors.”

As I post this week’s FOMM, US news channels are proclaiming Democrat candidate Joe Biden a narrow winner of the 2020 US election. Whether or not this is confirmed in the days and weeks to come, if you are one of the people who think Trump has to go, keep your spirits up (perhaps for another four years) by humming this ear-worm of a tune:

“Nellie the elephant packed her trunk and said goodbye to the circus, off she went with a trumpety trump – trump, trump trump.”

(Wikipedia says the rhythm and tempo of this song is often used to teach people cardiopulmonary resuscitation (CPR) (100 compressions per minute).