Home Friday on My Mind Trump, Clinton and the third candidate

Trump, Clinton and the third candidate 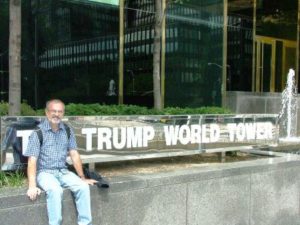 Who, except Donald Trump or Hillary Clinton, would want to be leader of a nation today? The manic, 24/7 pressure of life in the top job makes old men (and women) out of youthful candidates in no time. At home, we saw the pressure tell in quick succession on Rudd, Gillard, Abbott and now Malcolm Turnbull, who no longer resembles the debonair bon vivant who aspired to high political station. In the US, Barack Obama’s eight years in the job is etched into his face.

Yet the aspirant leaders keep coming. Hillary wants the top job, even though she saw what it did to her husband, not to mention Monica Lewinsky, these days engaged in anti-bullying campaigns.

Donald Trump wants to make America great again (though no-one has yet proven when the US was ever great). Former Australian PM Tony Abbott was cited (from afar), telling high-ranking people overseas he planned to make a leadership comeback. Whether he did or didn’t say this, on his return, Abbott and Turnbull clashed jousting sticks in the House, prompting gasps and gossip amongst Canberra lobbyists.

Who’d be a world leader? US presidents get asked to make awful decisions, to wit Harry Truman’s decision to drop atomic bombs on two Japanese cities in 1945, killing between 130,000 and 226,000 people. Harry didn’t drop the bombs, but it was his head that nodded when the generals asked him if they should.

Even Australian Prime Ministers are asked to make unpalatable decisions which may come back to haunt future generations. Bob Menzies bowed to pressure from Great Britain, who wanted to test atomic bombs in Australia’s western desert. After all, they could hardly do it in Manchester or Liverpool. People would have complained.

Some impressions of this seldom-scrutinised period in our history are captured in Collisions, an 18-minute multimedia film by Lynette Wallworth. The Monthly’s Quentin Sprague reviewed the ‘immersive’ film which premiered in Adelaide and is playing as a ‘virtual reality experience’ at Melbourne’s Australian Centre for the Moving Image until mid-January. Nyarra Nyarri Morgan, a young man in the 1950s when he witnessed the mushroom cloud above the desert, recalls its impact: “the surrounding waterholes boiled and kangaroos fell to the ground under a drifting blanket of ash.”  Later, when people became sick after eating the fallen kangaroos, they mused: “What god would do such a thing.”

Harry Truman recalls approving the bombing of Hiroshima and Nagasaki. In a biography written by his daughter, Margaret Truman, Harry’s decision to over-rule the general who believed the Japanese would surrender under the onslaught of conventional bombs, was aimed at saving Japanese and American lives. Almost 80,000 died after the firebombing of Tokyo, part of a planned programme of incendiary bombing.

“It was not an easy decision to make,” Truman said. “I did not like the weapon. But I had no qualms if in the long run millions of lives could be saved.”

After a successful testing in New Mexico, Truman approved the bombing of four targets – Hiroshima, Kokura, Niigata and Nagasaki

Given the history, you do wonder about people like Donald Trump, a self-described multi-billionaire who has no material need, apparently, to live in the White House. There are bigger and better mansions and easier jobs than making America great again, or even for the first time.

The media is making much of the Clinton-v-Trump clash, mostly ignoring a third candidate, Libertarian Gary Johnson and his running mate Bill Weld. Johnson and Weld say they have a master plan to sneak the presidency from under the noses of Trump and Clinton.

The Washington Times reported on Monday the pair say they can change history and win the election through a combination of quirky political circumstances, voting variables and polling inaccuracies. Polling data shows Johnson and Weld have greater support in 20 states than the margin between the Republican and the Democrat, neither of whom will find it easy to snare the necessary 270 votes. One or two states could determine the outcome.

Former Republican adviser Bill Whalen agrees there is a scenario where neither Hilary Clinton nor Donald Trump wins the presidency. He told ABC Radio’s Eleanor Hall on Wednesday much hinged on the outcome in Utah, where candidate Evan McMullen has snared enough votes to win that state. It could be that the House of Representatives will decide who is best suited to the Oval Office: Trump could be deemed ‘unsuitable’ and Clinton’s election risky, as it could spark a constitutional crisis if a Federal investigation finds against her. Enter stage left, Evan McMullen, an inscrutable former CIA operative who has a theoretical chance at the White House.

Here is yet another reason to cite The Simpsons. “Citizen Kang” (season 8), still rules as the best piss-take of the two-party political system. Homer is abducted by aliens Kang and Kodos who demand he takes them to his leader. When Homer explains about the (1996) election, the aliens kidnap presidential candidates Bob Dole and Bill Clinton, placing them in suspended animation and assuming their forms through “bio-duplication.” The one-eyed aliens plan to ensure one of them will become the next leader succeeds, despite their alienating habits of walking hand in hand, drooling green slime and talking in robotic voices (“Klin-ton”). Kang is subsequently elected, enslaving humanity into building a giant ray gun, to be aimed at an un-specified planet:

Meanwhile, the global media obsession with Trump vs Clinton, which promises to continue until January, provides perfect cover for our conniving government, which seems intent on homogenising the arts and making sure people who tried to get to Australia by boat go (somewhere else), and never return. Comedian Lucy Valentine suggested they should make this law retrospective to 1788.

Birmingham said the changes were made to focus on courses which would ‘benefit Australia economically in the 21st century’.

“Currently there are far too many courses that are being subsidised that are used simply to boost enrolments, or provide “lifestyle” choices, but don’t lead to work.”

Predictably, this decision brought forth a torrent of commentary on social media, ranging from reasoned debate to outright vitriol.

This issue, however, has slipped behind the international smokescreen which is the US presidential election campaign; a litany of (alleged) lies and counter-lies, insults and counter insults, accusations of defamation and one lawyer’s letter, published in the New York Times, which is very much worth reading.

If Donald Trump does not win the election, he has promised to sue everyone who has accused him of behaviour unbecoming of a US presidential candidate. It will be a long list.

He should probably just go back to building high-rise towers, hotels and golf courses and making money. He claims to be pretty good at that.