Home Friday on My Mind Say it’s your birthday 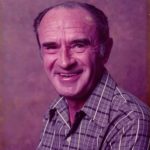 You might wonder about this birthday photograph of my Dad, who died in 1991. Point being, he was born 100 years ago in early October 1916. This is the way we want to remember him, a studio portrait from a happy time in his life. He made multiple copies and distributed them to whanau (extended family- for the non-Kiwis amongst you). This was the photo which inspired me to write “Like our Fathers,” a song about how we end up looking like our Dads and often thinking like them too.

October always gets me thinking about birthdays, not only my own, but a steady run of Libran/Scorpio birthdays. Some of these friends are celebrating milestone birthdays this year, though they’d pass for 39 even under bright lights. A couple of my Scorpio friends call this ‘birthday month’ and take liberties on all 31 days (and nights). Just in case.

So yes, it was 100 years ago a few weeks back when Dad reached that landmark, which brought to mind a Loudon Wainwright III song “Older than my old man now”. Loudon had just turned 64, whereas his old man died at 63, the event spawning not just one song but a whole album of tunes about ageing, regret, and perhaps a little survivor guilt:  “I am older than my old man now; I guess that means I kicked his ass.”

Loudon (who was 17 when his Dad died)  starts the song with a reflective spoken narrative – “If I remain still, If I am alone and silent long enough to hear the sound of my own blood, breathing or digesting above the rustling of leaves or the world of refrigerators, my father is likely to turn up. He just arrives, unbidden, in the long-running film of my thoughts.”

LWIII, as he prefers to be known, touches on birthdays and mortality in quite a few songs, including “Five Years Old”, “Happy Birthday Elvis” and “The Birthday Present”, where he celebrates “that halfway point, where life really begins”.

She Who Breaks Into Song When Least Expected has been known to sing this at special birthdays; its wry observations about loose teeth and sagging skin (‘proof that we have been around’) ticking all the boxes for a 50th or even a 60th celebration.

There are any number of pop songs and cultural references about birthdays, including more than 30 episodes of The Simpsons. Our resident Simpsonophile reckons the standout is Series 3 episode 1 “Stark Raving Dad”, when Homer is checked into a mental asylum and meets a fat white dude, Leon Kompowsky, who thinks he’s Michael Jackson. Jackson, a fan of the animated series, lent his voice to the character although for contractual reasons it was credited as John Jay Smith and a Jackson impersonator Kipp Lennon was hired to sing the ditty Jackson composed to celebrate the birthday of Bart’s sister Lisa. The otherwise forgettable song Happy Birthday Lisa appeared on the album Songs in the Key of Springfield attributed to a W.A.Mozart.

The Simpsons creative team had an idea to bring the Kompowsky character back in a similar scenario involving Prince but it never eventuated. After the death of the Artist formerly Known As, an Australian website published excerpts from the proposed script, which Prince had rejected.

But what about Literature?

Although I was fairly sure I’d read all that iconoclastic Japanese author Haruki Murakami had to offer, I found a slim volume of short stories in the local library. The 13 stories in Murakami’s anthology “Birthday Stories” include one of his own and a short introduction to each story by the inestimable author, (at one point the 4-1 favourite for this year’s Nobel Prize for Literature).

The anthology includes “The Bath,” an earlier version of Raymond Carver’s much-studied “A Small Good Thing”. The latter story, about a boy who gets knocked over by a car on his eighth birthday was made into a short film starring Lily Tomlin, Tom Waits, Andie MacDowell and Jack Lemmon among others.

If you’ve not seen Robert Altman’s “Shortcuts”, based on Carver stories, I won’t spoil the plot, except to say Lyall Lovett’s performance as the cranky baker trying to get paid for an expensive birthday cake is up there among the great moments of on-screen menace (Jack Nicholson in The Shining notwithstanding).

Murakami’s “Birthday Girl” tells of a waitress forced to work on the night of her 20th birthday. She is fortuitously assigned the job of taking a meal to the reclusive restaurant owner in his hotel room. On hearing it is her 20th birthday, the owner grants her a wish. But in the best ‘show but not tell’ traditions, Murakami does not reveal what the girl wishes for, hence the endless conjecture by Murakists on websites and forums dedicated to the writer. The original anthology was published in Japan only. The English translation includes Murakami’s personal thoughts on birthdays in which he reveals he has visited Jack London’s farm because they share a birthday and he greatly admires his writing style, as he also admired Raymond Carver.

If you are a Murakist, this exploration of his thoughts on prizes, Nobel or not, may be of interest.

All of which is more culturally enlightening than that godawful song people insist upon singing at birthday functions. I was dining alone at a Chinese restaurant in Lismore, as you do. The only other occupants had booked a long table, the women mostly at one end, the men mostly at the other and the kids in the middle. I figured it was a child’s birthday when the waiter brought out a cupcake with a sparkler. The table broke into Happy Birthday to You. Unhappily one end of the table started singing half a line before the other end got stared. The ladies selected a key close to D while the men started in E flat. It sounded as you might imagine. Not to be discouraged, the guests carried on into a rousing round of ‘Freeza,” though how an eight year old can be a jolly good fellow is something they clearly did not talk about beforehand.

Then the kids started throwing noodles at each other.

Just so you know, the official Happy Birthday to You song has been released from the clutches of a music publisher and assigned to the public domain. One of the plaintiffs in the copyright court case was going to be charged $US1,500 for using the song in a short documentary (about the origins of the song).

First written by sisters Parry and Mildred Hill in 1893, HBTY is often claimed to be the world’s most popular song. It’s not high art, but universally popular, that’s for sure. G or A are the best keys.

I have a good few years ahead of me to be older than my old man now, but I take it as an encouraging sign that the Department of Human Services, in its services to humanity, issued me with a new pension card that expires in 2018. Lordie, so I must have passed some actuarial high water mark when men in their late 60s pop their clogs. “He’s good to seventy” someone has decreed.

As comedian and actor George Burns (1896-1996), once said of ageing: “You know you’re getting old when you stop to tie your shoelaces and wonder what else you could do while you’re down there.”

Nice one Bob. Good flow of words – were you under the influence of panadol?! Hope you are better and goodenuff for rehearsal on Tues.