Home Friday on My Mind The Pilbara – a Google-free zone

The Pilbara – a Google-free zone 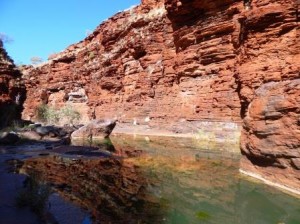 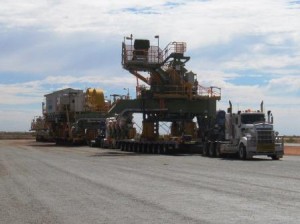 When I started this weekly essay three months ago, I was aware that from late June it would tend to have the flavour of a travelogue, given that we were about to set off on a three-month expedition across remote parts of this magnificent land. Now at the half-way point, coming to the end of a three-day stop at a bush camp in Karajini National Park, I’m doing it the old-fashioned way: who, what, where, when and why, the basics salted with philosophical musings about why the world is the way it is. My writing method is to start with an idea or a theme and cross over to the Internet when I want to find out stuff or check facts. We have all become so dependent on Google and other Internet search engines (yes, there are others), and what is (at present) a free service. It is like someone taking a 99-year lease over your memory and maybe someday making you pay when you want to remember things.
Here at Karajini National Park in Dales Gorge (known in local dialect as Nyingbungwana) campground, we have neither power nor mobile signal and only enough water to last us until we get to Tom Price on Friday. There are people here who have satellite dishes sitting outside their caravans, so I guess if you could be bothered you could find out what’s going on in the world. Last time we heard a radio news bulletin it began with reports on three separate murders in WA and then went on to talk about a sex offender who had breached release conditions by being around teenagers (he was fined $1000).
So now, in this remote part of the Pilbara, I can imagine how it might have been for the monkish scribes of yore, scratching away with a quill pen on the most rudimentary parchment; or for our original inhabitants, painting their handed-down stories on rock walls.
So I’m hammering away at my laptop in the shade of a Cypress tree, aiming to keep on writing until Windows 7 warns me to plug in to a power source or risk losing work that has not been saved.
If that happens, I will revert to pencil and notebook. If it’s good enough for David Malouf, it should be OK for me.
Meanwhile the tree under which I sit interrupts to admonish me for calling it a Cypress.
“I’m a bloody Mulga, you ignorant tourist. Your botanists named me Acacia aneura – you’d think they might have asked the local aborigines if we had a name.”
“Oh, you mean like Mount Nameless,” I say (biggest mountain in these parts). “I’m told the local name for that is Jarndunmunha.”
“That’s outstanding,” says the Mulga, shaking his branches in excitement. “You’re spot on, even if your pronunciation is shite.”
Just then She Who Has Gorn Orf Newspapers puts her cool palm on my clammy forehead.
“You need to drink more water,” she advises.
Shade is good out here in Karajini. While the temperatures are nothing like they were in the Kimberley, it is still hot and dry and those keen on bushwalking are warned to drink a litre of water for every hour of walking. We had just returned from a day of two-hour hikes down gorges to waterfalls and back, some of it in the middle of the day, which might explain the talking bush.
Wednesday our walks took us along the rim of Dales Gorge and then to the steep descent into the gorge, where walkers can either hike to Circular Pool or have a swim under Fortescue Falls. Or you can go further on to the Fern Pool (Jubula), a beautifully serene place of significance for local Aborigines.

Once the party of people from South Australia who were talking about AFL moved on, it was indeed a special place with its cobalt blue waters and bright green ferns growing around the base of ancient native fig trees, clinging tenaciously to the rock face.
One’s sense of place and awareness of the spiritual nuances of the land becomes finely tuned when sitting in the midst of Western Australia’s second biggest national park. If I had the Internet I could tell you which one is the biggest. Maybe you already know?
We came here from Port Hedland, a strangely fascinating industrial town, dominated by the iron ore shipped out on giant ore carriers every day of the week. Every day except Monday August 4, apparently.
The Information Centre, the Museum, and every shop was closed and all pubs bar one were closed for Port Hedland Cup day. We wandered around the deserted town, following the self-guided interpretive walk. It was a quiet day in port too, with only a couple of ore carriers moored in the harbour, but at least a dozen sitting way out on the horizon.
So we pressed on, after making sure we had enough good water to last four days, to the ancient gorge country 263kms south-west of Port Hedland. The road to Karajini is between Port Hedland and the major mining towns of Newman and Tom Price, so road trains are frequent, as are wide loads.
We have no idea what the equipment is or where it was going, but we were happy to leave it parked at a roadside rest area while we went on ahead.
Karajini National Park was declared in 1969 (it was then called Hamersley National Park), but it part of it was excised in 1986 to allow a new mine to start operations. There is a constant clash of values out here, between the needs of conservationists, tourists and miners. The traditional owners have a lot of say in how the park is managed today, but the prospect of more mining in the park is ever-present.
Karajini’s majestic scenery was brought about when massive rivers gouged away at the mountains over millions of years, creating distinctive gorge walls – layers of iron ore-laden sedimentary rock. The gorges are particularly special at sunset when the rock walls turn molten red. No comparison to the Grand Canyon, as it is hardly commercialised at all. The only public communication is limited to one card-operated public telephone.
So, now we’re in Tom Price, having done the mine tour (“know your enemy” –Ed) to pick up some WIFI and send this out. And we still don’t know who won the Port Hedland Cup.