Home Friday on My Mind Other People’s Dunnies 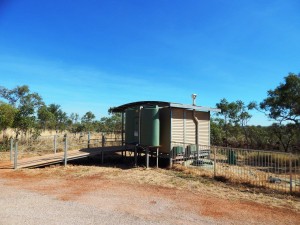 So I’m standing in front of a smeary mirror in an outback caravan park washroom having a shave when this old bloke walks in.
“Owya goin?
“Great thanks,” (continue shaving while Old Bloke goes into a cubicle nearby).
“Whereyaheadin?” says the voice from behind the door (rustling of clothing and clang of belt buckle as pants hit floor).
“Goin’ to Katherine then headin’ west to Broome,” I say, going with the flow of outback caravan park talk.
The conversation continues, punctuated with a few strained noises, the kind of which we all unconsciously make at one time or another in such circumstances. I nick my face, distracted by this curiously intimate dialogue and the steam on the mirror. Old Bloke finishes his ablutions and (good thing) washes his hands.
“Safe travelling then,” he says, disappearing into the starry night.
When you set out in a 12-foot caravan to ply the highways and byways of this vast land with nothing save the Thunder Down Under portable loo, it is a given that you will end up using other people’s dunnies. For my non-Aussie readers, dunny is Aussie for toilet (or WC, Washroom, Bathroom etc)
This bush toilet (top photo) at a roadside rest stop just before the turn off to Derby in the western Kimberley, is a good example of what we call “the long drop”. At Karlu Karlu (Devil’s Marbles) in the Northern Territory, National Parks provide a number of these unplumbed toilets at the unpowered camp ground. Each is a fair distance away from the camp ground.
If you go at night and switch off your torch when you get there, the night sky lights up with panoply of stars, the likes of which city dwellers rarely get to see. A torch is an essential piece of equipment when traversing even a short stretch of desert at night. Shoes are a good idea too. And when venturing outback and using these sorts of facilities, it is a sound idea to take your own preferred brand of toilet paper with you, as often there will be none, or worse, those small boxes with 200 wafer thin tissues (17.5mm by 11.5mm in case you were wondering).
This brings me to a persistent urban myth out here in caravan park land. Grey Nomads, we keep hearing, steal toilet paper. Yes they do, one woman insisted. They take their battery-powered drills into the loos, dismantle the dispensers and liberate the rolls. If author and folklorist Bill Scott were still around I’d ask him if he’d heard of that one (Bill wrote a book about urban myths called ‘ Pelicans and Chihuahuas and Other Urban Legends’).
I’m sure the loo roll-stealing granny is an urban myth (a fictional story re-told so often it assumes veracity). I mean, if you can afford a 30-foot caravan and a V8 truck to tow it, why would you flog $2 worth of toilet paper? That would be a selfish and tight-arse thing to do. (tight-arse being Aussie for cheap, overly thrifty, etc).
One of the joys of getting to use other people’s dunnies is that you get to collect examples of over-zealous sign-writing. The most common ones in washrooms and public loos are reminders about flushing, what not to put down the toilet and instructions on how to use toilet brush (and when). Some are ambiguous: “Please flush” and underneath “Water is scarce – be considerate.” Some are poetic: “Even if you’re in a rush, don’t forget to flush.” (and a coy reminder to flush twice to get rid of the evidence).
The inside walls and doors of some dunnies are festooned with philosophical and sometimes unprintable remarks from fellow travellers, some of whom one might guess are sorely disaffected. In 2014, with a mean-spirited Tory government beating up the poor as if it were their fault, a theme is developing: “Retiree bludgers with $100,000 fifth wheelers ripping off social security,” reads one. “Stop grey nomad welfare cheats,” says another. A socialist scholar urges us to “Subvert the dominant paradigm.” “Frankie and Donna were in this stinky toilet,” reads another.
Those Grey Nomads who travel all the time and have their own amenities have one pressing need when they come to civilisation: they need some place to empty their chemical toilet cartridges. Some towns provide a dump point, which is like a public septic tank. The oddest sight I’d seen for a while was in Emerald, where we’d stopped to admire the giant Van Gogh replica painting in the park. Four large caravans, each towed by a $70,000 4WD, drew up to the kerb one after the other. From these vans emerged men of retirement age, each carrying a long heavy metal box. They proceeded in convoy to the public dump point, rid themselves of the week’s takings and returned to their vans, having also had their exercise for the day. Did they stop to admire the scenery? Nuh.
In bigger towns which get swamped with backpackers and other travellers, it is not so easy to find a public toilet. Increasingly, service stations, libraries, information centres and cafes are keeping the keys behind the counter, in a bid to keep out the riff-raff. In Katherine, a sizeable town in the Northern Territory, a local shopping centre provoked some outrage and claims of racial bias last year after hiring a security guard to police the toilets and ask for a $2 “donation”. “That’s un-Australian,” I protested, as we went to the information centre instead. I often wonder what Riff and Raff think about being denied a basic human right. 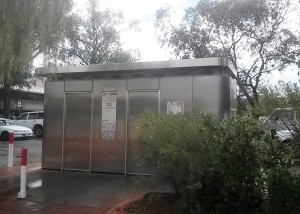 Town Councils are increasingly installing smart toilets to help combat instances of people vandalising toilets or using them as meeting places for purposes nefarious. So far we have found dunnies like this one in Alice Springs, also in Armidale and Hall’s Creek.
When you press the green button, the door slides open then closes with a metallic swish.
“Door larked,” says a metallic voice in an American accent. “You have 10 minutes before the door will un-lark. ” Well thanks for that – now I can’t remember why I came in here in the first place. Ah, right, the curry.
“Door will open in one minute 30 seconds…”