Home Friday on My Mind Seeking refuge is not a crime

Seeking refuge is not a crime 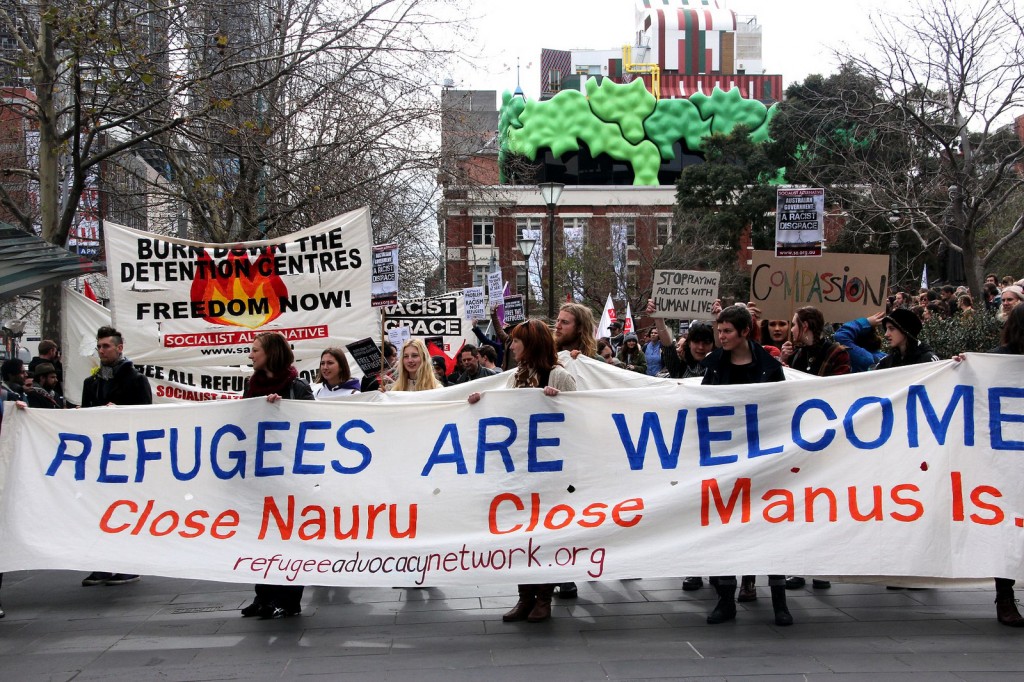 Seven out of 10 Australians think it is a crime to come by boat without a visa and seek refuge. Moreover, 60% of people surveyed by Australian Red Cross think there is an official “queue” of people seeking asylum. Both assumptions are incorrect.
Releasing its survey for Refugee Week, Red Cross CEO Robert Tickner said he was concerned about the level of misunderstanding.
“We think if some of the myths are dispelled we will have a more compassionate and stronger community.
“It’s not a crime to come to Australia by boat without a visa and ask for protection. Everyone has the right to seek asylum from persecution in other countries and it’s not illegal to cross boundaries without documents or passports to do so.”
Mr Tickner said the Red Cross survey also showed people were confused about the numbers of refugees and asylum seekers* in the world today. The number is approximately 17.9 million, yet about a third of respondents picked a figure four times higher and 25% thought it was about nine million.
I’m not a fan of surveys like these, often based on small samples, which are typically sent to media outlets on a Sunday afternoon – ready-made news stories for a slow Monday. I’m making an exception here because, on any analysis, you will find that the deep-seated misunderstandings about asylum seekers and refugees stem from our own government’s PR smokescreen which uses terms like “illegals” when the correct term is “irregulars”.
There is no official queue of people seeking asylum in Australia. The UN system prefers a discretionary process, so there is no guarantee people will be resettled, even if they have been waiting for a long time.

A drop in the bucket

I spent an hour or two trolling through volumes of statistics on this subject. Many refugees want to establish safe, secure lives here, despite the xenophobic attitudes of some Australians.
Of the 35,000 people who lodged offshore refugee applications last year, only 6,500 were granted visas. That’s less than 20%, but sadly, it’s been a fairly constant number for decades, whether our borders are managed by the right or left of politics. Permanent visas available under the skilled and family migrants programme, however, have been steadily increasing and now stand at 190,000 a year. Refugees resettled in Australia represent about 5% of the official migration programme.

Meanwhile, Australia has no commitment to an annual intake of refugees from refugee camps around the world. In just one example, 1.7 million people have been displaced by the Syrian civil war – about 30% of them living in 22 government-run refugee camps along the Syrian-Turkish border. How long can this be sustained?
The plight of the Rohingya, a Muslim ethnic minority group persecuted on religious and political grounds, has been well documented. The Burmese government passed a citizenship law in 1982, the same year they changed the country’s name to Myanmar. The law effectively excluded Rohingya people, saying they were (illegal) Bengali migrants from Bangladesh. This has cast many of the Rohingya into a no-man’s land. About 140,000 refugees live in nine border camps between Thailand and Burma. Some have been living this way for up to 20 years. Eventually, those determined to change their circumstances engage people smugglers.
We’ve all read the claims and counter-claims surrounding the most recent wave of people trying to land anywhere in South East Asia that isn’t Myanmar. The ships were turned away more than once by other Muslim nations, left to drift in the Andaman Sea with dwindling supplies of food and water.

People smugglers were blamed for creating this situation, and rightly so, but the efforts by governments to solve the problem did not help.
Faced with international outrage fuelled by headlines about “floating coffins,” the Indonesian and Malaysian governments offered to take in asylum seekers, providing they could be resettled or repatriated (sent back) within the year. However, the ABC reported that the UNHCR estimates that at least 2,000 people are still stranded at sea off the Bangladesh and Myanmar coasts. Now we are mired in an un-verifiable debate about whether or not the Abbott Government (and the Rudd/Gillard governments before them), paid people smugglers to turn around and take asylum seekers back to the point of origin. We’ll never get a definitive answer on this because it falls under the purview of “national security”. If we do pay people smugglers, they are in effect being paid twice for a service they are unable to deliver. The cash will then inevitably be recycled into more boats to bring outcasts close enough to foreign shores to force border protection agencies into some form of action.
When pressed by the ABC if he knew whether ASIS (Australian Secret Intelligence Service) officials had ever paid people smugglers in the Labor years, the current Opposition Leader Bill Shorten replied:
“No serious leader of Australia would start talking about ASIS matters. What I can absolutely say is I have been informed Labor has never paid people smugglers to turn around boats at sea.”

Michael Bradley, managing partner of Marque Lawyers, when interviewed on The Drum about the legalities of paying people smugglers to turn the boats around, concluded “I don’t think a crime has been committed, but we’re only speculating until we know the facts, which will be never.”
“That leaves the question of whether this is good policy. Is it in Australia’s national interest that we pay people smugglers to turn around?
“My instinctive reaction was to say no, but on reflection that’s mostly based on my revulsion at the depths which our government is prepared to plumb in pursuit of its policy of preventing asylum seekers from reaching Australia.
“More importantly, the policy itself, in the absolute sense, isn’t necessarily a bad one. It’s just that it can’t be effectively implemented without resort to measures which are morally bankrupt and which debase us as a society.”

Get to a rally tomorrow!
You will have heard a lot about this topic in Refugee Week. If you read news online, it is worthwhile scrolling down to see what readers have to say. If, like me, you plan to attend a rally tomorrow (Brisbane King George Square from 11am Saturday 20th June) and be one the faces behind the banner, you need to know that not everyone thinks we need more compassion and lower barriers to the entry of asylum seekers.
I ran out of paper and ink when printing out The Drum’s two-page story, as it was followed by 47 pages of comments! It’s where people with monikers like The Bronze Anzac and Joe Blow get to have their say and trade opinions with libertarians.
*An asylum seeker is a person whose refugee status has not yet been determined.