Home Allergies The scary truth about the paralysis tick

The scary truth about the paralysis tick 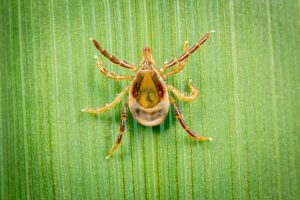 It is sometimes difficult to separate the facts about the paralysis tick from the myths and home-grown remedies suggested by well-meaning folks. You may have heard some of the suggestions on how to combat the tiny, toxic parasite that can kill dogs, cats and humans. The home-spun remedies include (for removal) kerosene, a hot needle, a hot match, Vaseline or methylated spirits.

No, you need to first kill the tick, by freezing it or using a scabicide. The Australian Society of Clinical Immunology and Allergy (ASCIA) recommends using a ‘freezing’ spray commonly used to treat warts and available at pharmacies.

A cream used to treat scabies also does the trick but you need to leave it on for 20 minutes before removing the tick, with tweezers or patented tick removers (firm grip and a slight twist). Or if you have freeze-killed the tick, it should just drop off at some point. Experts are divided on which is the best approach.

While there are 75 different tick species in Australia, the primary culprit which can kill animals and cause a life-threatening anaphylactic reaction in humans is the paralysis tick or Ixodes holocylus. The paralysis tick occurs along the Eastern seaboard of Australia, primarily in wet sclerophyll forests (the ones with ‘gum’ trees and a lower layer of rainforest plants or shrubs) and temperate rainforests).

Since I went to an information workshop organised by Barung Landcare in Maleny, I have been somewhat over-zealous in my daily inspections of the moist parts of the body where ticks latch on. At times, I imagine I have a tick, when it is more likely a mosquito bite, but one can never be too cautious.

In the last month She Who Picks Peaches without Wearing a Hat reported in with ticks (i) behind her ear and (ii) on the crown of her scalp. In both cases these were the paralysis tick at the nymph stage which I killed with a scabicide then removed in the recommended manner.

Everyone agrees: the abnormally cool spring coupled with recent rains has raised the paralysis tick threat to critical. Then other day I ran out to the washing line to take in clothes before a storm arrived. This was the classic mistake – running barefoot on to the lawn where ticks can promptly run up one’s trouser legs. Imagine the horror when I picked up the (empty) laundry basket and saw two paralysis ticks scuttling around inside.

“WTF,” I exclaimed to SWPPWWAH. “How do they do that?”

According to a rural myth, the little bastards can jump, like fleas. Well, no, I left the laundry basket sitting on the lawn! But ticks do ‘quest,’ that is, they hang off the end of a blade of grass or a plant/tree branch waiting for a host to brush by. Ticks go through three life stages from the time a female lays about 3,000 eggs (larva, nymph and adult).

As dedicated readers may recall, I had what was described as a mild to moderate anaphylactic shock reaction to a paralysis tick bite in 2013. (Jeez, what must it be like to have a major reaction?) If you want to relive the ordeal (I don’t), go here:

I now carry an Epipen everywhere I go. I also kit myself out in light coloured gardening clothes, gumboots, hat, smother myself in insecticide and hang a tick repeller around my neck. The latter emits an electronic pulse said to repel ticks up to three metres.

There were two speakers at the Maleny workshop, retired vet Leigh Findlay (who spoke about dogs, cats and ticks) and Dr Ted Chamberlain, senior medical superintendent at Maleny Soldiers Memorial Hospital. The 69 people who attended mingled outside the function room exchanging tick anecdotes and describing their most recent attack.

Attendees included several people who have a recently diagnosed type of tick bite allergy called Mammalian Meat Allergy or MMA. Once their lives have been saved the first time, MMA sufferers will doubtless be advised to avoid eating red meat. Mammalian meat allergy is the result of acquiring the carbohydrate, alpha-gal, from ticks.

Dr Chamberlain told workshop attendees that Maleny hospital sees people with a tick bite on average once a week and 20 serious cases of anaphylaxis each year. He added that before he came here, he’d seen two cases over a 25-year medical career.

Dr Chamberlain identified two ‘hot spots’ for ticks – the Blackall Range (Sunshine Coast hinterland) and the northern beaches of Sydney. He believes there are two reasons for the increase in ticks. One is the change in climate, the other is that people unwittingly create tick habitat by allowing native vegetation to flourish. The main issue with maintaining natural habitat is that it encourages tick hosts including bandicoots and possums.

But are there ways of ridding your habitat of ticks in general? The number one solution is the insectivorous Guinea Fowl. There is a practical problem with keeping guinea fowl on your land as you can tell by (listening) to this 30 second YouTube video

Guinea fowl eradicate ticks (and other insects) by systematically stripping grass and plant stems with their beaks. Free-range chooks will also peck away at ticks and other insects, but not so effectively.

Ticks do not fly or fall out of trees. If there is one latched on to your head it has been crawling around on your body for at least two hours;

The size of the tick bears no relationship to the severity of the allergic response;

Do ticks cause Lyme Disease? You may have seen an episode of Insight on SBS last year when host Jenny Brockie asked that question. The science says ‘no’ but an acrimonious debate has arisen as people succumb to strange illnesses which seem related to tick bites.

Certainly more research needs to be done to explore the genesis of “lyme-like illness” but for now, I’ll stick with the science answer: “…there is no definitive evidence for the existence in Australia of B. burgdorferi, or any other tick-borne spirochaete that may be responsible for a local syndrome being reported as LD.”

Nevertheless, a tick bite can cause swelling and infection and induce flu-like symptoms. Cases of tick-borne Rickettsia and Babesia have been documented in Australia. Some ticks bites can result in life-threatening illnesses including tick typhus and severe allergic reactions. It is now broadly accepted that forcibly removing a tick without killing it first may increase the severity of any allergic reaction.

The University of Sydney, which has been conducting research in this field for 12 years (with input from Dr Chamberlain), says the best method of avoiding ticks is to stay away from known tick infested areas.

Right. I’m looking out the window here at our serene country environment, the green rolling hills, the native trees blowing in the wind, native birds flitting about, the creek burbling away at the bottom of the block; the peace and quiet.

(Paw note: I removed a 2mm long tick from the dog’s lower eyelid(!) last night. Amazing to me was that he lay passively in my lap while I poked around trying to get a good grip on the nasty little parasite that was causing him discomfort. The dog is on tick/flea preventative medication, but it is important to check them regularly anyway. Ed)

Fortunately I’m not too bothered by ticks. Been round tick-type bush most of my life. I enjoy the bush without boots and gloves and sprays. You have to be vigilant and aware though; notice the itch that you get when the tick plunges its proboscis (?) into you. NO, we should not clear the bush so people can be ‘safe’ from ticks!! Once I had one in my ear. Went to doctor who didn’t know ticks (English locus). He looked in my ear and diagnosed a ‘growth’. I had to wait til i got back to Maleny; the 6 days… Read more »

My brother in law developed MMA a couple of years ago while living in St Ives in Sydney. His first reaction nearly killed him, and he now keeps several epipens with him and in the house. As for removing ticks, I paid about $14 for two small plastic “tick forks”, mainly for my cats when I stayed with my mother up on the Northern Beaches earlier this year. Wonderfully simple piece of technology that lifts the tick, with head, out of the skin before it knows what’s happening. You then have to kill the tick, but I found the expensive… Read more »