Catch a (brush) turkey for Christmas 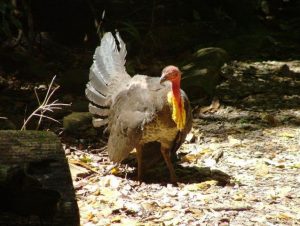 Brush turkey for Christmas dinner? – image by She Who Takes Bird Photos, aka Laurel Wilson

The only thing more difficult than taking a photo of a brush turkey is selling the notion of preparing one for a (budget) Christmas lunch. Those of you quick on the uptake will have already registered that Mr FOMM is being ironic. Brush turkeys as you may know are a protected and even endangered species. Besides, they have a “stuff you’ attitude which is refreshing (bok!) And the chicks are cute.

As it happens, turkey is the least popular meat for people laying in provisions for Christmas. The ubiquitous Christmas ham leads the pack by a good margin, along with chicken, then turkey.

Northern hemisphere folk might find this hard to fathom, but rich hot food is not a priority for the Australian Christmas lunch. No, we prefer ham, chicken, prawns, a variety of cold salads and condiments, followed up with fruit salads, ice-cream, custard and yoghurt, all of it more befitting our typical 30+ degree Christmas Day. The diehards do Christmas pudding, but as we all know, it takes a long afternoon nap to sleep it off.

Retailers work hard at this time of year to sell us on the idea of (a) over-eating (b) over-spending and (c) eating food we rarely eat. The latter includes turkey, which has its biggest sales between December 20 and 24. I’m aware turkey is very big in the US and Canada on November 23 (Thanksgiving). According to the University of Illinois, 88% of Americans surveyed by the National Turkey Federation eat turkey on Thanksgiving; 46 million turkeys are eaten each Thanksgiving, 22 million at Christmas and 19 million at Easter

Compare that with Australia, where 3 to 5 million turkeys are killed and sold for meat every year. On average, Australians eat approximately 1kg of turkey per person per year, most of which is consumed during one week at Christmas.

You can find loads of information on the Internet about meat consumption, much of it available on animal welfare websites, which point out the factory-like habitat of animals being fattened for consumption. I have a few things to say about that and one is that after being sent on an assignment to one of Queensland’s largest (cattle) feedlots, I went vegetarian for two or three months.

As you may not know, there are 2.1 million Australians (11.2%) who say they are vegetarians (Roy Morgan Research, 2016). Vegans are lumped in with vegetarians, though it’s not the same thing.

If you were curious about what vegos eat at Christmas, musician Emma Nixon says she makes a roast vegie, quinoa and lentil salad.

“It’s good hot or cold. I take the leftovers to Woodford ”

Another muso, Karen Law, says her family eats fish but is otherwise fully vegan. This year they might throw some salmon on the bbq, plus a lot of salad, bbq sweet potato and kipfler potatoes.

To spew or not to spew

Meanwhile, non-vegan Aussies are very big on eating prawns at Christmas – 50,000 tonnes were consumed last year at this time. Just so you know, 80% of prawns sold in Australia are imported and it costs about $50 a kilo to buy locally-caught prawns.

As I am one of an indeterminate number of people for whom prawns induce violent chundering*, I cannot explain the appeal. I watch people spending inordinate amounts of time shelling prawns (is that the right term) and it always seems to me there is more to throw out than what makes it into the ice bucket.

One Christmas past we returned from a holiday at the beach to be greeted with an awful smell, which was quickly traced to a full, broken, leaking and putrid wheelie bin on the street outside our house. Someone had waited until our (clean) bin was collected and replaced it with their munted* bin full of prawn waste. Eeuuw, people!

Full credit to Brisbane City Council waste management who (a) picked up the offending bin within 24 hours and (b) replaced it with a brand-new bin.

But I digress (yet again)

We are a wealthy country with relatively high disposable income, low-ish unemployment and a reputation for spending more than we earn.

Our local research found that the price of Christmas hams can range from as little as $7 a kilo in discount supermarkets to $18 a kilo for organic and/or free range ham bought from a butcher. A premium boneless leg of ham could cost you upwards of $30 a kilo.

That seems cheap when you read about Spain’s jamon imberico, the truffle of the pork world. A 7.5 kg leg can cost between $A180 and $A720. Iberian ham comes from blackfoot pigs, raised on pasture planted with oak trees. According to my favourite source (The Guardian Weekly), the demand for Iberian ham in China is such that the escalating price is denying humble Spaniards their once-a-year treat.

Just so you know what you’re eating, all fresh pork sold in Australia is 100% Australian grown. However, approximately two thirds of processed pork (ham, bacon and smallgoods products) is made from frozen boneless pork imported from places like Denmark, the Netherlands, Canada and the United States.

According to an international study by Caterwings, Australians chew their way through 111.5 kilograms of meat per year, per person. (Someone’s eating our share). This data probably does not take into account the 11.2% of Australians who are vegetarians and vegans, the 604,000 Muslims as well as those of the Jewish faith who do not eat pork; or the unknown number of people who have developed a mammalian meat allergy by exposure to ticks (more on that topic next week).

If you can’t afford $90 or so for a leg of ham, I have a suggestion. There are these prehistoric-looking birds that roam around the scrub. They are notorious for scratching up people’s vegie gardens and using leaf litter and mulch to make huge mounds, inside which they lay their eggs. Yes, they are protected and indeed endangered (the chicks are left to fend for themselves as soon as they can walk around). But who’s to know if you knock one off, pluck and gut it, stuff it and cook for 17 or 18 hours or until tender? Don’t forget the basil.

Just don’t throw the waste and left-over meat in the wheelie bin and forget to put the bin out. That would be unneighbourly.

*Munted – Kiwi for ‘damaged or unusable.’

Hey Mr FOMM, nice to meet you and the Mrs last night. Interesting read and we’ll researched. I know the people you mentioned, and the food matches the person…