Home Consumerism Return of The Wastemakers 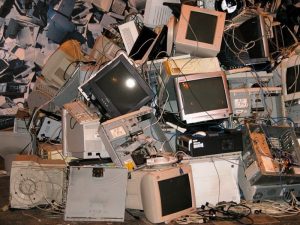 I had a Vance Packard moment this week, thwarting the concept of planned obsolescence, which he wrote about in his 1960 best-seller, The Wastemakers.

My triumph was no big deal, but they were hard-won as I finally, after four weeks, got my 32-year-old Technics stereo system working again.

Before we get into that, and on a similar theme, I would like to have a rant about the complexities and nonsense of Windows 10. Microsoft’s latest operating system deserves inclusion in my seldom-heard song, ‘Windows F*****g 8’, which I wrote in honour of the man who warned me to stick with Windows 7 (…”It isn’t fair, but they don’t care, that I can’t find F*****g Solitaire”….)

When we moved, my 2015 laptop, running on Windows 7, was labouring, crashing, not responding to commands, giving me blue screens and multiple hard drive error messages. My new Lenovo has a lot going for it – extremely light, fast and not too expensive at all. But it came with Windows 10 pre-installed and an infuriating voice-activated robot called Cortana, who offers to solve any problem but more often will say “I’m sorry, I didn’t understand.”

So Mr Microsoft, why did you dump Windows 7 (which, after this month will no longer be supported). in favour of an operating system that tried to look like Apple Mac and failed? Just like Vista, 7, 8 and 8.1, it has so many bugs you do so yearn for good old Windows XP. IT companies constantly upgrade and invent new software and gadgets. The manufacturers of computers, smart phones, mobile entertainment and all their peripherals have no choice, if they want to stay in business, but to continue selling us flawed ‘upgrades’.  In the case of Windows 10, Microsoft forced us into it by withdrawing support for Windows 7.

Windows forums have a lot to say about 10, its dodgy updates and other shortcomings. The most irritating thing is the assumption (by Microsoft) that you will take up the expensive annual subscriptions to pre-installed software trials and store all your personal data in the cloud, at a cost, of course. After some reading, I managed to install Office 2010, which I bought and paid for once already.

The good news is there are plenty of ‘fixes’ out there for Windows 10 glitches. I found one key piece of advice (not from Microsoft). In Windows 7 I used the ‘recent documents’ link constantly. It was easily found under documents/folders. Windows 10 has done away with this useful tool.

Solution: use the keystroke Windows key/e. Thank me later.

She Who Also Has Windows 10 is now regretting asking me to upgrade her laptop. The worst part of upgrading was that (initially) we could not get the printer to work, or the network sharing we previously employed.

There is now a security feature called Network Credentials which requires you to enter your Microsoft outlook name and password if indeed you succumb to that malware-type exhortation. That only took me three hours to fix – to whom should I send the invoice?

Nevertheless, if you still have Windows 7 and it decides to stop working, you will be in trouble. The good news, if you are game, is that Microsoft’s free upgrade is still available (rather than buying it for $169). Not that I recommend it, but here is the link I used to download and install Windows F*****g 10 on SWAHWT’s laptop.

Vance Packard saw all that coming, three decades before personal and business computers became a mainstream, multi-billion dollar industry. Packard was well ahead of his time, writing a number of thoughtful books about consumerism and the stealthy way the industrial-military complex manipulates people to its own greedy ends.

The thesis Packard pursued in The Wastemakers is deftly summarised in an article found on Trove.

The author of The Hidden Persuaders and The Status Seekers analysed over-production and the planned obsolescence of so-called consumer durables.

“The average American family throws away about 750 metal cans each year,” he began. “In the Orient, a family lucky enough to gain possession of a metal can treasures it and puts it to work in some way, if only as a flower pot.”

Packard claimed that in 1960s America “each individual man, woman and child was using up to an average of eighteen tons of materials a year”.

Sixty years after Packard published his book, consumerism and the advertising that encourages it is no less insidious. Rampant and shameless consumerism suggests that anything “used” is shaming to its owner.

“The escalation of self-indulgence and the planned chaos leaves the buyer bewildered and helpless amid that shambles of phoney price-cuts, sales prices, special discounts etc.”

As people often do when moving, we purchased some new consumer ‘durables’, well aware that the generic 12-month warranties suggested a limited life span.

Meanwhile, the Technics stereo system, bought from one of Brisbane’s Brashes stores in 1986, was still sitting in carefully packed boxes in the garage. Sure, I was listening to MP3s on my Bluetooth speaker, but it is so not the same.

The Technics system was top of its class in 1986 and still performs well. It has seven individual components all interlinked by a maze of cables and power cords (one feeds the other until finally, one goes to AC power).

The problem this time with installation was (a) delving through the five manuals to remember how to reconnect everything and (b) the speaker leads were too short. They were always too short, but in our previous home it was never a problem.

I am not, as you’d know, not the world’s most practical chap. But I’m stubborn (and cheap). I turned to YouTube’s host of geeky how-to videos. What I wanted to do was work out how to extend the stereos leads, which is hard to do when said speakers are sealed boxes which offer no easy way to replace leads.

The first video I found (1:47) when searching ‘how to open sealed speaker cabinets’ is a classic example of why you can sometimes find helpful hints, and sometimes not!

After I stopped laughing and explored some other more useful options, I went into town and bought a 6m roll of 14 gauge speaker cable and some electrical tape. I used a box cutter and a pair of pliers to hand-cut the cable into two lengths, stripped 1cm of plastic off both ends of each cable and then used electrical tape to connect the longer leads to the short speaker cables. As such jobs go, it is not pretty. But it works.

I finished setting up the system about 11pm and rewarded myself with a cup of tea, listening to Homeless, a vinyl album by Ladysmith Black Mambazo.  As you may recall, the acapella African choir’s music formed the basis of Paul Simon’s amazing 1986 album, Graceland. Simon’s song Homeless is track 1, side one. Of course I fell asleep listening to side two and never got to flip the album over.

The really good news is there are a few hundred more vinyl albums in boxes in the garage. (Ed: Not that we have anywhere to store them).

Well done, you waste warrior ! May the Technics out-live you ( no, I’m not suggesting you pop your clogs soon, just another 30 years at least for the stereo). And it’s immune from the necessity of upgrades. that is a rarity these days.

Wow, I didn’t know about that Packard book.And 60 years ago !! Though I read Hidden Persuaders

One more thing: could you post a list of those handy ways to get around Windows 10 “improvements” to Win 7 ? That’d be grouse.