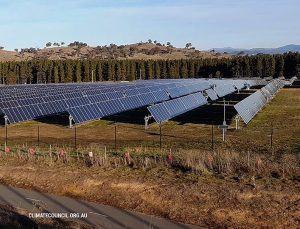 Have you ever noticed, after giving your dog a bath, how it will head straight for the nearest patch of renewable energy? Ours has a favourite sunny spot next to the dining room table where he will happily bask, while our solar-powered camping lamp, calculator and torches are recharging on the window sill.

Free sunshine – what’s not to like? As it happens, we have been preparing our little caravan for a weekend music festival in the bush. The 160 watt portable solar panel slides snugly under the bed. At $159, this has proved to be a worthy investment for our outback and bush music weekend adventures. It means you can keep topping up the caravan’s battery (if the sun is shining) and go to bed early if it’s not.

Australia’s Bureau of Meteorology has confirmed the winter just past was the hottest since records began in 1910. It was also the 9th driest winter on record. The average maximum temperature was almost 2 degrees above the long-term average.

Meanwhile, Texas is suffering unprecedented flooding courtesy of Hurricane Harvey, the reporting of which has somewhat overshadowed devastating monsoon flooding in South East Asia. So far, in the latter disaster area, 1,200 people have been killed and almost two million children were unable to get to school.

As we ironically say in the privacy of our own home – “Just as well there’s no such thing as climate change, then!”

Now all, some of, or only a small part of these extreme weather events could be ascribed to global warming/climate change, which, 97% of scientists agree, is mostly caused by human activity.

Despite this consensus on behalf of an apparently overwhelming majority of scientists, sceptics disagree. I happened to read that former Prime Minister Tony Abbott is set to deliver a speech, “Daring to Doubt,” at an annual climate sceptics group meeting in London on October 9.

You might remember Tony Abbott – his reign as PM at one year and 361 days (cumulative terms), was longer than that of Harold Holt and Billy McMahon, but not by much.  Abbott the Climate Change Sceptic is infamous in some quarters as the man who canned the government-funded Climate Commission as part of a Budget cost-cutting exercise.

South Australia is a clear leader in the renewable energy field, the stakes raised by the government’s decision to replace ageing coal-fired power stations with a 150 megawatt solar thermal power plant.

FOMM foreshadowed this in 2014, when the SA government was trying to negotiate the future of the coal mine which fed its Port Augusta power stations. Now, after five years of lobbying and debate, the SA government is aiming to invest $650 million in renewable energy.

It hardly seems worth mentioning that 1,900 kilometres away, the Queensland Government, in a contrarian move, remains committed to the country’s largest Greenfield export coal mine. The Carmichael mine, which includes a dedicated railway line to take coal north to Abbott Point, is deeply unpopular among environmental groups because of the potential damage it could cause to the Great Barrier Reef, both by the number of ships traversing the narrow channels, and through coral bleaching as a result of human-induced temperature increases.

On the other hand, Queenslanders’ love affair with domestic solar panels is demonstrated by the fact that  32% of households are covered in 2017. Lobby group Solar Citizens (almost 100,000 members), welcomed last week’s decision by the Queensland Government to increase the regional feed-in tariff (FiT) program. This will allow solar systems up to 30kW to receive 10.1c per kWh – six times more than what was previously agreed.

Solar Citizens has an ambitious target of one million solar roofs by 2020.

“Queenslanders know a sensible idea when they see it – with 520,000 solar homes, our State has the highest rooftop solar uptake in the country,” a spokeswoman said.

However, critics of domestic solar energy say the flaw is that those who can afford to become self-sufficient do so, and those who cannot end up paying disproportionately more for energy.)

This week, the Climate Council presented its annual ‘state of the States’ renewable energy report. CEO Amanda McKenzie said the State survey showed a major step up from last year. All States and Territories (apart from WA), have strong renewable energy or net zero emissions targets. South Australia is building the world’s largest lithium ion battery storage facility, and over 30 large scale wind and solar projects are under construction across Australia in 2017.

“The good news is that many States are surging ahead and doing the heavy lifting for the (Federal) government.”

Last week, the Victorian government flagged new legislation which would increase its renewable energy target to 40% by 2025. There is also an intermediate plan to lift Victoria’s clean energy target to 25% by 2020.

So yes, it does seem as if individual States (and Councils) are setting their own renewable energy policies, in the absence of clear leadership at a national level.

Noosa Mayor Tony Wellington did not miss an opportunity to talk up his region’s commitment to solar panels. Noosa Shire, which de-merged from the larger Sunshine Coast Regional Council (SCRC), claims 9,000 households in Noosa Shire have solar installations, which is better than the State average. Cr Wellington told the Sunshine Coast Daily Noosa’s goal was to be ‘carbon neutral’ by 2050.

Not to be overshadowed, the SCRC opened a 15 megawatt solar farm in July. The SCRC was the first local government in Australia to offset 100% of its electricity consumption with energy from a renewable source.

But what can humble citizens do, as pro-coal lobbyists clash swords with the solar and wind farm warriors? The go-it-alone mentality arises from a failure on the part of our Federal Government to stimulate investment in the renewable sector. Australia has already promised, under the 2015 Paris Climate Agreement, to reduce greenhouse gas emissions by 26% to 28% on 2005 levels by 2030. But Tony Abbott’s call as PM to reduce the renewable energy target (and now he advocates scrapping it altogether), was unhelpful.

Whatever way you judge it, a former PM addressing the Global Warming Policy Foundation is not a good look. The last Australian PM to do so was John Howard in 2013 (when he claimed global warming had stalled and was sceptical about the possibilities of an international agreement on climate change).

There have already been reports in the UK media which seized on old quotes by Mr Abbott referring to climate science as ‘bullshit’ and recycling his coal is ‘good for humanity’ comment.

As readers will know, we spent a week out at Carnarvon Gorge in July, a time of year when it is common for the temperature to dip below zero at night. We packed accordingly, then spent four nights kicking off the doona and keeping each other awake as the mercury stayed above 15.

It should be cool at night for the Neurum Creek Folk Festival, but I packed my shortie pyjamas, just in case there is such a thing as climate change.