Home Music The autoharp, recorders and other rites of spring

The autoharp, recorders and other rites of spring 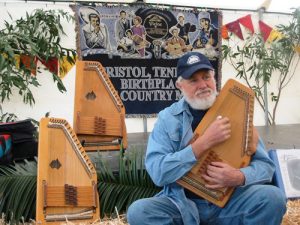 As today is ostensibly the first day of Spring, I am cleaning up the music room, starting with a dusty old autoharp. Honestly, I don’t remember where I got it from, I can’t tune it and don’t know how to play the autoharp in the first place. Yet it sits in the bottom of the cupboard, gathering cobwebs. Occasional bursts of enthusiasm about learning to play the instrument have all faded away. Like morning dew, if you will. When I catch up with Queensland folksinger and autoharp-maker Evan Mathieson (above) I might ask him what he thinks of my old relic.

The autoharp belongs to the zither family and in theory it is a cinch to play. Chords are played by pressing down on a felted bar which mutes all but the strings that make up the chord. You then lightly strum with the other hand. Start with a two or three chord-song like Catch the Wind or Banks of the Ohio.

The autoharp, though descended from a line of German instruments, was popularised in the American folk scene and taken up by some who later became pop stars. In 1965, John Sebastian’s band Lovin’ Spoonful had a hit with his song, Do you Believe in Magic. While Sebastian was highly regarded as an auto harpist and often played it on stage, it is not that discernible in this YouTube clip, although you can at least get a sense of how the instrument is played.

Do You Believe In Magic?

You’ll know the tinkling sound of the autoharp, even if you cannot describe the instrument or imagine how it is played. In 1979, the late Randy Vanwarmer’s lonesome ballad, You Left Me Just When I Needed You Most, was best known for its plaintive autoharp instrumental, played by John Sebastian.

I’m told that Queensland folksinger Evan Mathieson was inspired to start making his own instruments after hearing John Sebastian play a Bach piece on an autoharp. Hand-made instruments can be built to create chords not always available on commercially-made autoharps.

You can get caught up watching old (and new) clips on YouTube of people playing the autoharp. Dolly Parton’s there, so too Sheryl Crow, Maybelle Carter, Billy Connolly, Peggy Seeger and many more.

Crikey, they say even The Dude plays autoharp, though Jeff Bridges apparently prefers playing his Gretsch Country Gentleman guitar when performing with his band, The Abiders.

American virtuoso Bryan Bowers (he’s in the Autoharp Hall of Fame), is credited with introducing the instrument to new generations of musicians. Lakes of Pontchartrain.

I’d love to say someone played autoharp on Song of the old Rake, from Paul Kelly’s Foggy Highway. Programme notes archived by the late lamented Lonely Planet, alas, inform us that Kelly’s band, the Stormwater Boys, used highly-tuned guitars to mimic the autoharp sound. They did it very well.

There are quite a few rock bands and recording artists who use autoharp in their arrangements, but none as effectively as PJ Harvey.

This is an unusual clip in that it starts with PJ alone in a room rehearsing The Words that Maketh Murder, then cuts back and forth between the band version and PJ alone in her room. The lyrics in this anti-war song (from Let England Shake) are brutal, so if you’re the sensitive type, don’t go there.

Evan Mathieson has made a life study of the instrument and also makes autoharps, complete with the signature ‘map of Australia’ sound hole. The instrument suits Evan’s strong baritone and is ideal for a solo act performing folk songs. I’m told he’s leading a shanty session at the Maleny Music Festival on Saturday night.

The music room in our house doubles as the collective home office in which many great decisions are made, petty arguments thrashed out (and where many of the 173 FOMMs were conceived). I believe there will be no argument from She Who is Also Spring Cleaning should I decided to give the autoharp away (SWiASP found a website for the Australian Children’s Music Foundation, which provides free instruments and lessons to disadvantaged children).

Most homes harbour at least one musical instrument, upon which lessons were learnt and quickly forgotten. Recorders, harmonicas, ukuleles, tin whistles and guitars are the instruments most likely to have been bought on a whim and discarded once lessons got harder.

Most children have a stab at learning an instrument at school – usually a recorder as they are relatively easy to learn and affordable. Any parent who has endured the period where their child struggled to play the recorder without making the infamous ‘squeak’ might want to check out recordings by Maurice Steger. The world champion recorder player has taken on compositions by Vivaldi, Telemann, Handel and baroque music composed for the recorder.

As Steger told ABC Classic FM: “In its heart of hearts the recorder is an incredibly simple instrument and yet it is so hard to make it sound beautiful. That is what makes it so fascinating.”

So before your kids get bored playing ‘Hot Cross Buns’ and decide to pack the recorder away with the jigsaws and board games, get them to check out Steger’s amazing performance of Vivaldi’s Recorder Concerto RV 443.

Recorders are much favoured by schools as they can be bought for less than $10 and immediately give teachers some idea if the pupil has musical aptitude. They are also much-loved by musicians who form early music ensembles (typically using tenor, alto, bass and contrabass recorders). Like the clarinet, the recorder can sound dire in the hands of someone who has no aptitude and/or no inclination to practice.

You may notice how I have digressed from the opening paragraph which claimed I was spring-cleaning the music room. Actually it’s not all that bad – a few years ago I threw out old capos, out of tune harmonicas, a rusty tin whistle, and mailed a parcel of used guitar strings to a charity that sends them to people who can’t afford to replace their guitar strings. There’s still a lot of stuff in the cupboards: boxes of (unsold) CDs, boxes full of demo and rehearsal CDs and cassettes. I always meant to go through the cassettes and convert them to digital files (MP3s). The problem with that is the process happens in real time. So we’re talking not about hours or even days, but more like months of drudgery. So much easier just to take it all to the tip.

I found a commercial cassette – the first Spot the Dog album. After converting it to CD, I asked if anyone wanted the cassette. Not even Mark Cryle (and it was his band’s first recording), took up the offer. He told me he already had a few sitting around at home.

As for the autoharp, after a fitful hour or two grappling with the tuning key and an electronic guitar tuner, I concluded the real issue is it needs new strings. I looked up prices at juststrings.com and figured that at $100+ I’ll just give it a vacuum and put it back in the cupboard.

It’s still not in tune.