Rainwater Tanks Save The Day 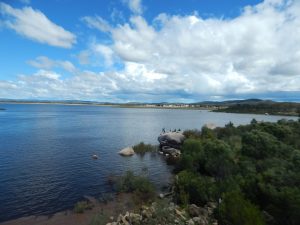 Yay – the dams are full, creeks and gullies are running; rainwater tanks are spilling over. Everyone’s happy.

Our three rainwater tanks are full, as you might expect of a region where two water-starved dams reached 100% capacity in just two days.

In January 2020, a national news story told of the local council carting water to Stanthorpe from Connolly Dam in Warwick. The cost, borne by the State Government, was $800,000 a month. Carting ended last week after the March rains brought Storm King Dam back to capacity.

As you might expect, the district deluge was met by the relaxation of severe water restrictions which have been in place now for several years. Southern Downs Council had lifted daily water restrictions from 80 litres to 120 litres in mid-2020. Last week the limit was raised to 200 litres per person per day. There are caveats on this, however, with permanent restrictions applying to the use of hand-held hoses to water gardens or wash cars.

How quickly our mindset changes. We’ve gone from leaving the toilet water to mellow for days and collecting shower water in buckets to using a hose (between 7am-9am and 4pm-7pm) to wash cars. Last time I washed our car I used tank water in buckets.

It’s not so long ago that academics were advocating the use of recycled water to drought-proof houses. Writing at a time when at least seven New South Wales regional towns were in danger of running out of water altogether, Professor Roberta Ryan of the University of Technology Sydney (UTS) wrote that the only real obstacle to using recycled water for a range of purposes was community acceptance.

“Household waste water (which is what goes into the sewerage system from sinks, toilets, washing machines and so on), is a more consistent supply, with 80% or more of household water leaving as waste water.

“Furthermore, waste water goes to treatment plants already, so there is a system of pipes to transport it and places which already treat it, including advanced treatment plants that can treat the water to be clean enough for a range of purposes”.

You might recall that stories like this in 2019 and earlier were met with community opposition. In 2006, Toowoomba, Australia’s biggest inland city, voted against introducing recycled water.

Those advocating re-cycled water (extracted from treated sewage), suggest using it to operate washing machines and toilets in homes and to irrigate parks and sports grounds. Many Councils already use recycled water for those latter purposes.

It’s been a hit and miss affair, with rebate schemes ending as quickly as eager queues started forming. Australia’s building code requires tanks to be installed and plumbed in to all new houses, although this differs from State to State. For example Queensland’s local governments can opt-in (or out).

In 2013, the Australian Bureau of Statistics found that 2.3 million households (26%) used a rainwater tank as a source of water, an increase from 1.7 million (19%) in 2007. The ABS said the increase from 2007 to 2013 may be attributed to water restrictions, government rebate schemes, water regulations and water pricing.

South Australia had the highest proportion of households that used water from a rainwater tank (46%), followed by Queensland (34%).

In the absence of an update, extrapolating the annual rate of growth assumes Australia now has close to three million rainwater tanks. This estimate could be rubbery, however. The unknown factor is the numbers of tanks which are self-installed without going through Council.

Although authorities generally do not recommend that households drink harvested rainwater, the supply can be used for a range of purposes, including washing, bathing, laundry and gardening. In some parts of Australia, it may be the main source of household water, while in others, it can supplement existing mains or town water supplies.

Rainwater Harvesting Australia, a committee comprised of irrigation industry leaders, advocates use of rainwater tanks as part of a blueprint for urban water management. A strategy is suggested (for South East Queensland), to consider re-use of storm water to improve the diversity and resilience of water supply. The strategy also recommends rainwater tanks and a basic form of passive irrigation for street trees.

The main criticism of rainwater tanks is that they breed mosquitoes and testing has shown sufficient pathogens in the water to dissuade many Councils from recommending it be used for drinking.

Despite the development of waste water recycling and desalination plants, Australia is still highly dependent upon rainfall as its main source of town water.

A Productivity Commission draft report in 2020 found that direct rainfall (surface or bulk water) or indirect (groundwater) accounted for 89% of all urban water in 2017-2018. The balance was attributed to recycled water (6%) and desalinated sea water (5%).

The report argued for a (national) integrated approach to urban water management, citing seven impediments to such an approach. The key stumbling block is the management of storm water, much of which flows out to sea.

For purposes of this discussion, the report criticises State government policies for mandating recycling or rainwater tank installation without a full cost benefit analysis.

“Many governments, for example, set recycled water targets, mandate the installation of household rainwater tanks or specify that recycled water is to be used in particular applications (such as for flushing toilets).

“These policy decisions are often set without clear and transparent evidence and analysis. They have driven significant investment and have sometimes resulted in higher costs than alternatives and failed to deliver their expected benefits.”

The report cited Marsden Jacob Associates, which found that the costs outweighed the benefits by more than $2000 per tank in most cases. Harvesting rainwater tends to be more costly than supply from centralised supply systems. For example, research in south-east Queensland found that the average cost of tank water was $9.22 per kL, substantially higher than the $4.40 per kL for potable water at the time.

They also allow households to have flourishing gardens when water restrictions are in place.

A recent study by the CSIRO (apparently a first), found that 96% of participants identified benefits with their rainwater tanks. The most prominent were: watering during restrictions (88%), reduction in water consumption (82%) and benefit to environment (71%).

Cost-benefit analysis aside, I’d advocate for an integrated approach to installing rainwater tanks in every home and business in Australia. Surely we can solve the apparent downsides (including mosquitoes, water-born disease and contaminants (ash and debris from bushfires).

The key may be for Councils to implement an annual maintenance inspection and issue show-cause notices to those whose systems need work. As the CSIRO study found, only 58% of respondents in an ABS survey claimed to undertake any kind of rainwater tank maintenance. At present, householders have no legal obligation to undertake maintenance other than to minimize public health risks.

The practical advantage of a good rainwater tank system is that it ensures your allotment will dry out quickly once the rain stops.

Meanwhile, we have 9,200 litres of water stored to irrigate gardens through the traditionally dry winter.

It can’t be a bad thing.