Home cancer Movember and a short history of facial hair

Movember and a short history of facial hair 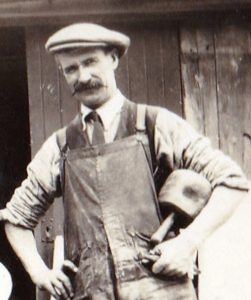 Grandad Wilson with a circa 1920 moustache

Fourteen years ago a couple of Aussies came up with ‘Movember’ – a campaign to raise awareness of men’s health issues including prostate cancer and depression. There are many ways to take part in Movember (which lasts for the month of November). The most visible way is to join other men who are growing a Mo for 30 days and ask people to pledge support.

No better time to introduce Grandad Wilson (;left), posing in his stonemason’s workshop in rural Scotland, circa 1920s.  Now that’s what I call a moustache!

I have another, more sombre photo of Grandad in his WWI Corporal’s uniform in front of a small platoon of soldiers. Some of them are sporting a ‘Mo’, and, if I may observe, many of them are yet to make twenty years of age. I wonder how many of them made it to 20.

It was interesting to discover that from the Crimean war onwards, men in the military were forbidden to shave their upper lip. Attitude to hairy faces in the armed forces and police have changed many times since.

Moustaches were all the fashion in the early part of the 20th century, thanks in part to silent era movie stars like Charlie Chaplin and Oliver Hardy. Both comedians’ sported Toothbrush moustaches – five centimetres of hair above the lip, trimmed vertically, thus mimicking the bristles of a toothbrush. This type of Mo virtually disappeared after 1945 because of the negative association with the toothbrush moustache cultivated by the defeated Chancellor of Germany, Adolf Hitler.

Chaplin wore his Mo with pride in the 1940 satirical film, The Great Dictator. He alternately plays a Jewish barber who loses his memory and finds himself subject to tyranny, and the tyrant himself, Adenoid Hynkel. Nearly 80 years on, Chaplin’s first full-length talking film is still rated at 93% by movie review site Rotten Tomatoes.

What got me thinking about Movember and moustaches in general was the November 2 appearance of rugby league coach Brad Fitler on TV, sporting the wispy beginnings of a moustache. Taking a gentle ribbing from panel commentators on Nine’s broadcast of the triple-header league international, Fitler said, ’it’s for a good cause’.

To become a Mo Bro, you must first sign up as a clean shaven dude as of November 1 then start growing and grooming a Mo.

The movement got its start in 2003 when mates Travis Garone and Luke Slattery met up for a quiet beer in Melbourne.  The moustache was unfashionable at the time, but they found 30 blokes willing to take up the challenge. From humble beginnings, Movember has branched out into 20 different countries and raised $600 million for charities like the Prostate Cancer Foundation.

As Fitler says, it’s a good cause, raising awareness of  men’s’ health issues, symptoms of which a lot of men ignore, often at their peril.

Cancer Council statistics estimate that 1 in 7 men will be diagnosed with prostate cancer. The good news about this form of cancer, which comprises 25% of all male cancers, is that it is slow-growing, so unsurprisingly there is a 95% chance of reaching the five year mark. Unlike some forms of cancer, prostate cancer can be quickly picked up by a blood test which all men over 45 should have every year.

Movember also aims to lift awareness about depression in men and the risk of suicide, still the leading cause of death in Australians aged 15 to 44. Men are three times more likely to commit suicide than women. It has been estimated that around 60,000 Australians attempt suicide every year. So it serves a useful purpose simply by putting these issues under your nose, as it were.

Movember’s rules quite rightly stipulate no fake moustaches, beards or goatees. They also state the Mo must be kept groomed and that participants must ‘act like gentlemen’. 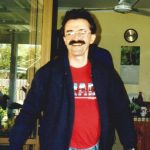 Grandson Bob with a 1990s moustache

Mo’s come in all shapes and sizes. In my experience of cultivating a Chevron in the 1990s (left), they take longer than a month to become vigorous, so don’t expect too much from Movember participants (especially those who start late). Film stars have helped to give the moustache some cachet through the eras where they were prominent on the silver screen. Clark Gable enhanced his suave country gentlemen looks in Gone with the Wind. His was a Pencil moustache, also favoured by actors including Errol Flynn and David Niven, writer George Orwell and musician Little Richard. The Pencil Mo is defined by a carefully shaved gap between the two sides.

Chaplin and Hardy, as we mentioned, wore the now-taboo Toothbrush Mo. Tom Selleck sported a handsome Chevron in Magnum PI, starting a 1990s comeback of the coarse-haired, thick moustache.

Wrestler Hulk Hogan is often mentioned for his magnificent Fu Man Chu that droops down either side of his mouth. Actor Sam Elliott has worn a Fu Man Chu for so long it is now snowy white, still enhancing his twinkling smile. And what a contrast between the suave, smooth-shaven 007 and Sean Connery’s moustachioed character in The Untouchables. Musician Frank Zappa gets a mention in this list by artofmanliness.com, but on Movember’s definition it’s a fail, as he also had a ‘soul patch’ under his bottom lip. 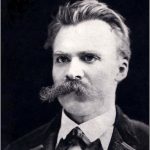 I recommend scrolling through this list of celebrities known for their moustaches. The impressive Handlebar moustache worn by German philosopher Frederick Nietzsche (left) stands out from the crowd. Imagine kissing that! In my long experience of having a beard and mo of varying lengths, there are certain foods that men with facial hair like Frederick should avoid:

It is interesting to note that the list of hirsute blokes listed by artofmanliness.com does not include Groucho Marx or famous fictitious characters like Hercules Poirot and Boston Blackie. As it turns out, Groucho’s famous set of bristles was fake (at least in the early days), which is curious when you think how his combination of eyebrows, glasses, Mo and cigar so often feature at fancy dress parties. Likewise, Chaplin’s Toothbrush mo was painted on in the early days of films featuring his character, The Tramp, mainly to disguise his age (he was 24 in the first silent film in 1914).

Poirot’s waxed moustache (often described in Agatha Christie’s books as ‘magnificent’, ‘immense’ or ‘splendid’), is an integral part of the series.As Poirot says to Hastings (in Peril at End House): “If you must have a moustache, let it be a real moustache – a thing of beauty such as mine.”

Kenneth Branagh’s turn as Poirot in the 2017 remake Murder on the Orient Express, acknowledged the importance of Poirot’s facial hair to the character’s character. To that end, numerous movie sites let it slip that Branagh had some cosmetic help with that.

I mentioned Boston Blackie, featured in Jimmy Buffet’s song ‘Pencil-thin moustache’, a tribute to the first half of the 20th century.

Boston Blackie was a fictional character created by author Jack Boyle. A jewel thief and safecracker, Blackie became a detective in adaptations for films, radio and television. And yes, like Clark Gable, Errol Flynn and others, he had a Pencil moustache. It is not recorded whether his was au natural or faked with greasepaint.

As Buffett says of male grooming in an era ‘when only jazz musicians were smokin’ marijuana’ – ‘Brylcream, a little dab’ll do ya’.