Home agriculture Maize and the quest for gluten-free food

Maize and the quest for gluten-free food 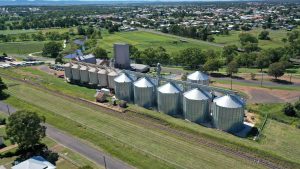 As you’d know, we have been in the Tasmanian wilderness. Here’s something I prepared earlier (and posted on Thursday night!).

I’d no sooner starting thinking ‘Where do gluten-free products come from?’ when I found the answer right under my nose, a kilometre from home. The Warwick Mill, which incidentally has been trading for almost 150 years, processes maize into maize flour and other products which manufacturers use to meet market demand for gluten free breakfast cereals, breads, snack foods and brewed products.

In case you did not know, the FOMM team largely depends on a gluten free diet for various health reasons (not coeliac disease). We are always encouraged when finding palatable new products that have joined the GF club. I cite as examples GF beer and that staple spread of Australian pantries – Vegemite.

The Warwick Mill was once owned by the Toowoomba-based Defiance Group. The mill was bought in 2003 by New Zealand family company Corson, which also has mills at Gisborne and Tuakau in the north island.

The Warwick-based company, Corson Grains Defiance Maize Products, processes on average 35,000 tonnes of maize a year. The cobs are bought direct from Southern Downs growers and stored in silos for six to eight weeks to dry before milling begins.

The maize kernels are milled into two different types of ‘grits’ from which the mill produces six products including flakes (for cornflakes), maize flour, semolina and super fine polenta flour.

“This is something a number of our business customers have been asking for,” he said. “We see it as a real opportunity for growth and to get some geographic spread along the eastern coast.”

In 2018, the company started a major on-site storage project, adding six new 1800-tonne silos, manufactured in Allora. This took the storage capacity of the mill from 3000 tonnes to 13,800 tonnes.

Now there are many companies manufacturing GF cereals, bread, pasta, biscuits and snack food. They are all supplied with the raw materials from mills like the Warwick operation, which employs 26 people.

We have noticed since we first started taking a caravan around rural Australia, how small towns have recognised the importance of catering for people who are shopping for GF products. On our most recent trip, I found a loaf of GF bread in the freezer of a grocery store in a small New South Wales town.

People who have coeliac disease become unwell after eating foods containing gluten, a protein found in wheat, barley and rye. Over time, the immune reaction to eating gluten creates inflammation that damages the lining of the small intestine. Medical complications can follow, including malabsorption (prevents some nutrients being absorbed by the body). Many people have no symptoms but the classic one is diarrhoea. Other symptoms include bloating, wind, fatigue, low blood count (anaemia) and osteoporosis. Healthline says the mainstay of treatment is a strict gluten-free diet that can help manage symptoms and promote intestinal healing.

A few of our family members in Canada are afflicted with this auto-immune disease. Cousin Glen put up with a mixed bag of symptoms before a naturopath suggested in the mid-1980s he was gluten-intolerant.

“Back then the condition was totally off the radar of conventional medicine. I have never been diagnosed as coeliac and march under the banner of the gluten intolerant.”

Glen’s brother was formally diagnosed with coeliac disease, as was a young relative of She Who Is Also Gluten Sensitive. All agree it was good to identify the cause and the cure (a gluten-free diet). Cousin Glen said the improvement in his overall health once off gluten was     “immediate”.

Having said that, it is important to have some tests and get a GP or nutritionist to verify whether you have coeliac disease or are gluten-sensitive. There’s a difference.

Officially it is known as non-coeliac gluten sensitivity (NCGS), a condition which belongs in a cluster of food allergies including lactose intolerance. The numbers of people who are choosing to go GF has risen steadily over the past five to 10 years – in Australia it is estimated to be between 7% and 12% of the population.

The US National Library of Medicine refers to a survey that showed the market for gluten-free products grew at an annual rate of 28% between 2004 and 2011. Today it is a market worth more than $6 billion in the US alone.

Some of the GF retail drive has come from celebrities and athletes recommending it for weight loss and improved performance.

The proliferation of ‘free from’ products has created a marketing push, with many supermarkets devoting entire aisles to products, be they GF, dairy free or foods that avoid serious allergens like nuts and egg.

Although I’m not a drinker, I was in a bottle shop one time with SWIAGS when I spotted a six-pack of GF beer. As is often case with GF products, it was more expensive than standard beer. But SWIAGS (sometimes known as Ed), said it was quite palatable.

According to VinePair.com (which maintains a list of GF beer brands) gluten-reduced beers are brewed just like regular beer, with malted barley, wheat, rye. The beer is then exposed to an enzyme during primary fermentation, a filtration agent that has little if any effect on beer’s flavour. Or the beer can be made directly from gluten-free cereals.

It’s easy (if you do not suffer from food allergies), to be flippant about so-called lifestyle diets. In Richard Osman’s amusing Thursday Murder Club, he invents a vegan café in a up-scale retirement village called, Anything with a Pulse. Then there was Tom Waits telling David Letterman he’d passed a street protest on the way into the studio. “What was it about?” Letterman asked. “Free the glutens,” said Tom.

While that’s happening, I guess people will try the hit and miss system of eliminating certain foods from their diet and then introducing new ones. It’s great to see food retailers responding to this growing ‘trend’ with a line of ‘free from” foods (not just GF-free but lactose free, including ice cream and milk). It can be a bit of over-kill, though, when the label ‘gluten free’ is attached to such products as plain potato chips. Marketers are always looking for a trend to latch on to. (Let’s hope our ‘marketer in chief’ doesn’t find a winning one prior to the next election. Ed.)

Next Week: Confessions of a TreeHugger