Confessions of a Tree Hugger 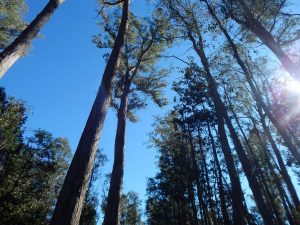 Our whistle-stop tour of Tasmania (18 days) reminded me much of my teenage years in New Zealand as a fledgling Tree Hugger. Tasmania itself reminds Kiwis of the home country, with its hilly roads, sparse population and evidence of man’s attempts to harness the wilderness. Tassie’s north-west coast in particular looks like the rugged beech forests of the South Island’s west coast.

(Photo: tall timbers at Heritage Point on the Gordon River.)

There are other reminders; the valleys cleared for cattle and sheep farming and small crops, and roads lined with poplars (a species introduced as a wind break), just starting to put on their golden autumn coats.

After just a week in the World Heritage Listed north-west national park, I could see why people keep coming back to the Apple Isle (to see and feel the magic things they missed the first and even second time).

It could all so easily have been lost to industry and development.

The informative day tour on the Gordon River from Strahan reminds us of the 1970s conservation battle to save the Franklin and Gordon Rivers from a proposed dam and hydro scheme. It is extraordinary to contemplate today the mind-set of those who opposed conservationists’ efforts to block the dam and hydro complex. It was not until Bob Hawke’s newly elected government took the Tasmanian Government to the High Court that the dam was stopped.

The Tasmanian Wilderness World Heritage Area is one of the largest conservation areas in Australia, covering 15,800 square kilometres – about 25% of Tasmania. The cherished north-west attracts serious hikers, bushwalkers, bird watchers, botanists and nature lovers from all over the world. Serious walkers make the 80 kms trek from Cradle Mountain to Lake St Clair, which takes six or seven days. Hikers carry everything they need on their backs, stopping at national park huts along the way. Recently (2020) a marathon event was started, with runners completing the trail (which is considerably up hill and down dale), in eight hours or so.

Having walked the six kilometre undulating track around Dove Lake, reading about the ‘run’ reinforced my personal goal to cap bush walks at 6kms (up and down) or 10 kms flat. You have to know your limits.

You might think that Tasmanian conservationists, having managed to save a quarter of the island from mining, logging and development, could rest easy. Not for a minute. There has been ongoing activism and opposition to logging and mining in the Tarkine (Takanya) for a decade or more.

The Tarkine in the north-west corner of Tasmania is the largest temperate rainforest in the southern hemisphere. Veteran conservationist Bob Brown is leading the latest challenge to the Tarkine, home to ancient native forest and threatened wildlife species. Brown’s latest campaign centres on a newly discovered valley which contains a grove of 2,000-year-old Huon pines. These particular trees are threatened by the activities of a mining company which has an exploration licence in the Wilson River catchment, where Brown and rafting companions discovered the Huon pines. As an article in National Geographic explains, this is a big deal because Huon pines are now rare in Tasmania after decades of logging by “piners”. Logging was banned in the 1970s, but you can never say never where mining companies are involved. Activists are trying to stop the mining company clearing trees (as part of its exploration licence).

There are a lot of minerals under the ground in Tasmania. The early miners came with pan and shovel for the gold but later the serious money came for iron ore, copper, zinc, lead and tin. There were always tin mines in Tasmania which went in and out of operation as the international price of tin rose or fell. Today tin has become a valuable commodity because of the advent of storage batteries for electric cars and solar farms.

Tasmanian activists are mounting a legal challenge against Venture Mining’s plan to mine iron ore in the Tarkine, Likewise, there is a protest against plans by a majority-owned Chinese mining company, MMG, to build a tailings dam in the Tarkine. Tailings dams are where mine operators store the liquid waste from mining operations. As you may have read over the years, there have been numerous occasions when tailings dams collapsed or started leaking toxic sludge into local rivers.

If you want an insight into the doggedness of the Tasmanian activist, check out Ben’s blog from the Tarkine front line. Ben and his friends are serious about their mission, willing and able to shackle themselves to trees and bulldozers to stop logging before it starts.

Since I started this week’s missive with the word Tree Hugger, I should explain that the word Tree Hugger is a disapproving term used to describe someone who is ‘too concerned about protecting trees, animals and other parts of the natural world from pollution and other threats’. (Britannica dictionary).

My Tree Hugger days started in the 1960s with a track-marking programme in Te Urewera National Park (New Zealand’s North Island). Volunteers helped rangers to cut paths for the growing numbers of tourists who wanted access to the North Island’s biggest stand of old native bush. It covers an area of 2,147 square kilometres and is a refuge for rare birds and native timbers like Kauri, Remu and Totora that once covered the entire country.

As an election looms, politicians of all persuasions should remember the times that governments fell, partly due to so-called Tree Hugger campaigns. The Franklin blockade and Bob Hawke’s promises to stop the dam helped him win government in 1983. Also remember Queensland Premier Wayne Goss’s defeat in 1996 was, in part, attributed to plans to build a highway through a koala habitat.

People who progress from nature lovers to conservationists to activists inevitably don’t notice the conflicts inherent in their actions. Just like developers who never give up on a development approval, no matter how much opposition there is, protesters can become just as bloody-minded.

There was a photo on social media a few years ago of hundreds of kayaks clogging up a harbour. The flotilla was protesting deep-sea petroleum extraction. Someone commented that it should dawn on the protestors that their kayaks were made from petroleum products.

I was dwelling on this sort of irony while pumping $116 worth of diesel into our SUV, one of Australia’s five million registered diesel cars. The other 15 million private vehicles in Australia are fuelled by unleaded petrol (the majority) with a small proportion powered by LPG or electricity. All, apart from electric vehicles, exacerbate the planet’s serious climate change crisis through their emissions.

After a round-Australia tour in 2015 we worked out our carbon footprint and converted it to a sum of money which we donated to a Landcare group. The idea is that the $300 or so be used to re-plant trees and replenish the carbon sink. It’s a noble gesture but probably futile on the scale of land clearing still going on in all states and territories including Tasmania (which has only 11% of its rainforest left). As we always say (when shaking our heads at the latest flood-plain housing development) – “Who the hell approved that?”

She Who is Also a Tree Hugger says it’s a battle between people who give a shit about the environment and people who don’t. She expanded on this to describe that many of the people who don’t subscribe to environmental principles are fundamentalist Christians whose view is that they were put here to be fruitful and multiply and have dominion over the earth.

fascinating read as always, Bob. I too am a tree-hugger, and was down at the Franklin-Gordon blockade in 83. That was an amazing experience. Watching so many brave resourceful young people pursue a dogged fight for months, and eventually winning. I was outside the Tassie Wilderness Society office in Strahan one day when one of the organisers – the lovely humble Cathie Plowman – came out and shouted Hawke had turfed out Hayden ( this just shortly after Fraser has called the election). Huge euphoric cheers. We knew then that Labor would now win, that our campaign was won.I’ll never… Read more »

Thanks Simon I got a few emails from people who were involved at one stage or another. What were they thinking!
Bob