Home epidemics Splendid isolation in the time of COVID-19

Splendid isolation in the time of COVID-19 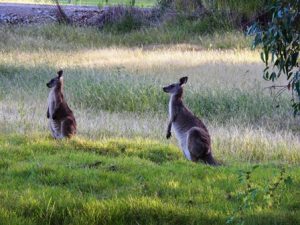 As we drove 1,200kms in haste from Albury NSW to the Southern Downs, trying to escape Queensland border chaos, I was grateful for readers’ insights into COVID-19 and isolation. First of all we should credit Sandy W with the witty caption for this week’s photo.

Realising I’d be spending three days driving home before resigning ourselves to self-isolation, I asked FOMM readers for their thoughts on this health crisis. I was overwhelmed with responses, so will keep some back for next week’s quarantine episode.

Two readers sent me the same meme which essentially says:

“Your grandparents fought in a world war. All you’re being asked to do is sit on the couch. Don’t fuck this up.”

The meme memo was a bit too late for the hapless authorities who allowed 2,700 people to disembark from the Ruby Princess and mingle amongst the crowds in Sydney’s streets, shops and nightclubs; 130 passengers have since tested positive to COVID-19.

Yesterday we began 14 days’ voluntary home detention, mindful that we have been travelling through rural NSW in recent weeks.

King Richard of The Village said self-isolation is ‘great’.

“I’m enjoying the time to do all those jobs at home that I put aside for another day. We visit the IGA late in the evening when we need to and keep in touch with friends by phone. It’s a bit like my childhood memories of World War II and self-sufficiency.”

I asked our musician friend Silas Palmer how his gigs were going: “Six major festivals and a lot of small events, all cancelled but we’re in the same position as everybody else.”

“But we’re practicing a lot,” he added gleefully.

Katie Bee self-deprecatingly said: “So far the trickiest thing for me is that with so many things I CAN do, and so much time to do them in, my procrastination knows no bounds!

“But I’m finding myself a little more often on FB, and keeping in touch with friends by phone or email, and am gradually doing jobs that normally never enter my consciousness, after which I reward myself with some Netflix.”

Superchip from Calgary said that having been raised on a remote prairie farm in southern Alberta, isolation was not something that caused him great angst.

“I do not consider my formative years as being spent in social isolation, but I did spend a lot of time alone. I learned how to make my own fun. I learned how to just sit and try to take in my surroundings. I enjoy the company of other people, but I don’t need it on a constant basis. Given the state of the world at present, I feel I am one of the lucky ones. Getting past the pandemic will not be a mental challenge for me.”

Anne and John are self-isolating, which means missing out of physical contact with grandchildren.

“We are missing our music session, our book clubs and exercise classes,” Ann said. “Our little granddaughter (supposed to be keeping to her school routine at home), Zoomed us this morning and tried to teach us some origami to keep us occupied…..argh!”

Barbara is coming to terms with strict tests and limits in her home, the Independent Living Unit section of an Aged Care Facility.

“The impact of the virus has radically changed our lives in the past couple of weeks, but particularly in the past couple of days.   All entrances other than the main one to our Residential Care Facility were closed last week; entrance restricted to two only visitors at a time (who have their temperature taken and are then asked to use hand sanitiser). This test has now been extended to delivery drivers visiting the facility.

Despite the constraints, she does not feel out of touch with the world.

“My IPhone is in full use. I can have uke jam sessions with friends; enjoy the light hearted Facebook posts and many, many things to keep my day full.”

A few of my readers appear to belong to the introvert club (we are apparently supposed to teach extroverts how to handle this).

Roger Ilott has been a professional musician and sound engineer for more than 30 years and is not fazed at all.

“As the ultimate stay-at-home, this is fulfilling a lifelong ambition of mine – I’ll never have to go out again!

“I actually always just wanted to be a session musician and did quite a bit of that in the 1970s and 1980s. Since Penny (Davies) and I started our own folk music label back in 1982, I’ve been able to do loads of session work as well as performing. I’m happy all my days sitting in the studio recording (and in cricket season, streaming the Sheffield Shield while I record!).”

After eight days in isolation, Ruth realised this was very similar to how her life has been for the past eight years, caring for her husband who had a serious stroke.

“I have come to this realisation after speaking to family and friends on the phone, some of whom are expressing angst and frustration. On listening, I realise I don’t feel like this at all. I am actually loving it. Loads of time in the garden( work and pleasure), heaps of time for photo sorting and sending, enjoyment in doing things I NEVER do, eg, cleaned all our windows inside & out the other day!”

Choir enthusiast First Soprano said that self-isolating for a couple of weeks would be easy as long as you prepared appropriately.

“Social isolation, as we know, is not a healthy situation (and unfortunately, unlike the Italians, we don’t live in high-rise flats; Italian city folk have been able to continue “socialising” from their balconies, which actually looks like lots of fun and would certainly keep spirits up), but happily in this day and age we have Skype and FaceTime so we can still easily keep in touch with family and friends.”

Jim from Albuquerque said life in the time of Corona had made a difference in his working class neighbourhood.

“Both friends and neighbours with either high or low paying jobs are on furlough or worse. Some better compensated than others in time-off but all paddling the same boat. Neighbourly relations are conducted at a safe remove but with a higher content of cordiality: Hey, howya doin’?; Feelin’ OK?; Need anything? Toilet paper?”

“Mercifully, no one is sick.”

Jon from Vancouver Island says there is always plenty to do on his little farm in what is often regarded as Canada’s Riviera.

“Spring has just arrived, which means preparing the garden for the upcoming season. Like many, I shudder when reviewing my market stocks but this brings with it a modicum of patience, realizing that fixing this up effectively is beyond me.”

Ms Proodreader, who lives alone, said she is enjoying the interaction with virtual choirs and musicians sharing online.

“I’m mostly staying upbeat but I’m prone to little bursts of panic. I’m very much keeping away from all media….. especially social media…… as there is so much misinformation and I just need to know the basics not the analyses and the what ifs.”

Yeh I’m with Proodie on that one. There is a lot of misguided and possibly inaccurate information being spread on social media by people who should know better. The mainstream media is completely obsessed and helplessly looking for any new angle.

As for the free papers left in the letterbox – wash your hands after reading.

Postscript: You might enjoy Erin Sulman’s Apocalypse Playlist. If you do have a listen, track 30 is Warren Zevon’s Splendid Isolation. It was recorded live in Brisbane in 1992 – you can probably hear us and Prince Richard of the Village cheering.