Home Arts Don’t fence me in – a COVID-19 adventure

Don’t fence me in – a COVID-19 adventure 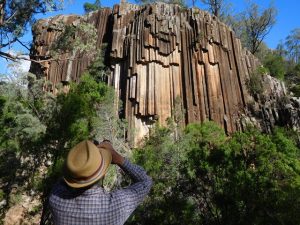 The author looking for an elusive bird at Sawn Rocks, 25kms from Narrabri. Photo by Laurel Wilson.

In downtown Dubbo, NSW, the checkout operator at one of the major supermarkets described the day as ‘crazy’. Shopping late (6pm) we managed to buy enough food to tide us over, mindful of Scotty from Marketing’s exhortation to stop hoarding, because ‘it’s UnAustralian’. But the PM was at least three weeks late with that edict, which fell on deaf shoulders (in Dubbo at least). There were plenty of empty shelves and shortages. No rice, mince, long life milk, potatoes, pumpkins or toilet rolls. I cracked a lame joke with a customer about SFM’s demand that we stop hoarding.

“Didn’t work here,” was the terse response. (Possibly because people resent being spoken to like naughty schoolkids.Ed.) The only things on our list that we could not buy were spuds and long life milk – the mainstay of campers everywhere. What is that about? In normal times supermarkets can’t give it away!

But these are not normal times, not at all.

As of 8pm on Thursday, there were 565 diagnosed cases of coronavirus in Australia. Yes, it is spreading fast. But lazy reporting, combined with deliberate sensationalism in the news media does not help with perspective.

Example: “The number of COVID-19 cases in NSW (265), has escalated dramatically,”  the comment not balanced with the observation, ‘Australia’s most populous state’ (7.54 million).

Scotty and his War Cabinet came up with the idea of advising the cancellation of all non-essential events attracting crowds of more than 500 people. Just why they decided on that arbitrary number is one mystery. The other imponderable is why the COVID Crisis Team decided to foreshadow the plan on March 11 but postpone it until after the weekend of March 13-15, which just happened to be the start of the rugby league season.

As we all now know, future rounds of NRL matches will be held in empty stadiums, to attempt to limit the spread of the virus; to flatten the curve, as they say.

Regardless of what happens to the infection rate now, 80,000 people attended eight rugby league games last weekend, not to mention the thousands who attended the Hillsong Conference in Sydney. As of last Monday, you can’t go and watch a live footie game anywhere.  I have no argument with that, but must roll out the old cliché about  closing the stable door. Too late, Scotty, that horse has bolted. The War Cabinet may yet regret the decision to let 80,000 people co-mingle, three days ahead of a ban on mass gatherings, which they now tell us could last for six months.

As I said last week, we are on the road and anything could happen. The three music festivals and a garden show we had planned to attend have been cancelled. Nevertheless, we motored on down the New England and Newell highways, giving our new-ish caravan its first serious road-test.

People we know who are taking the coronavirus more seriously than we are (so far) seemed alarmed that we were not self-immolating or whatever they call it. We are not alone. I counted 185 vehicles between Moree and Narrabri (some 100kms). A third of them were trucks – essential services, no doubt. In a way, we travellers are all self-isolating, sealed in our air conditioned cabs except for times when we have to refuel (paying by EFTPOS, using the same keypad upon which hundreds of customers have already left their microbe-laden fingerprints).

We’ve been staying in local showgrounds, a process which usually involved leaving cash in an honesty box. Vans are parked a long way from each other so there’s not much interaction unless you go looking for it. As I have remarked to people who know me well – I have no trouble with social distancing.

It’s a bit hard to find a news story which is not touching on the coronavirus pandemic, even in a small way, so we switched off and went birdwatching. Lake Narrabri is a good spot to see water birds of all varieties, which we did, thanks to the unprecedented discipline of getting out of bed at 7am!

If we were not ambling around country New South Wales (centre of the coronavirus universe, remember), we’d not have seen the amazing Sawn Rocks (photo above). The basalt formation lies at the bottom of a small gorge in remnant rainforest. The spectacular geology is known in the trade as ‘organ piping’.

Later we drove to Gulargambone, (kudos for those who can pronounce it correctly) stopping off for a good soak in the Pilliga Bore Baths. There were three other people in the pool and we all negotiated our corners without anyone having to say anything. I noticed that they close the baths for cleaning on Friday mornings.

Matters of personal hygiene loom large when assailed by a fast-spreading virus for which there is no vaccine. Dubbo’s biggest supermarket was right out of all items related to hand sanitation. My plan is to buy a small spray bottle from a $2 shop and mix up a mild solution of antiseptic and water. I was bemused to see sideline officials at the Tigers vs Dragons game, disinfecting footballs every time one of them went off-field. Dip, rinse and dry. Then gloved-up ball kids ran the ball back to where it was needed. Did that really happen?

The cancellation of the three music festivals at Katoomba, Yackandandah and Horsham was not a financial loss for us, apart from deciding not to upgrade our non-refundable cheap air fares to Sydney and back.

We were just going to these festivals as punters, maybe picking up a walk-up gig along the way. But I feel for my musician friends trying to earn a living in a notoriously fickle business.

As one muso friend said: “We’re watching our careers evaporate and transition to an online model that can’t possibly be sustained.”

Sick of all the negativity and doom-saying across all media, I went on a hunt for the places which had the smallest exposure to COVID-19. Gibraltar, a British protectorate located between Spain and Morocco, has only three reported cases after banning all cruise ships quite some time ago. The Vatican (meaning the Holy See), had one reported case, and the ACT has three, including high-profile politician Peter Dutton. Or you could head for the Northern Territory where no cases of COVID-19 have been reported. But you’d have to be sure you were not carrying the virus, and apparently that is the one thing none of us know.

I’m not at all sure how the Vatican City, a walled enclave within greater Rome, has managed to keep coronavirus out. Italy now has 25,000 cases and the death toll has reached 1,809. Normally a haven for tourists in the lead-up to Holy Week, this report says tourists have vanished across Italy. That must be a weird feeling for the citizens of Venice, who each year host 20 million tourists.

Closer to home, the Byron Bay Blues Festival and Canberra’s National Folk Festival at Easter have both been cancelled, with a host of smaller events following suit. Sydney’s Royal Easter Show and Melbourne’s annual flower show have also been axed. This is likely to be a financial disaster for the catering businesses who earn a living from such events.

Meanwhile we will continue on our uncharted road adventure, spending a bit of money in local towns, as my editor person says “until someone in authority orders us to stop.”