Home Friday on My Mind Homeless for a week

Homeless for a week 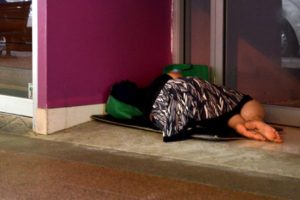 The first time I thought of Homelessness Week 2016 (August 1-7) was when a young family member posted something on Facebook, aiming to raise funds for a St Vincent de Paul homeless charity, Fred’s Place. Alice took part in a community sleep out on Thursday night, raising funds to keep Fred’s Place operating.

Vinnies operates a few such sites across Australia. This one in Tweed Heads offers a home and support for people experiencing homelessness or who are at risk of homelessness.

Fred’s Place is a fully renovated home with three bathrooms, a large laundry, internet and telephone, television, staffed kitchen, inside and outside areas to socialise, storage and mailing facilities. There’s also a dedicated room for Centrelink, Medicare, Counselling, Legal Assistance and Housing NSW, all available on a weekly or fortnightly basis.

You might read elsewhere about chief executives sleeping rough for a night to get the smell of homelessness in their nostrils and raise money for charities. They’ll be up bright and early next day for eggs benedict and lattes at their favourite café, but who’s quibbling about that? All of these once-a-year sacrifices by those fortunate to have a job and a roof over their heads helps highlight homelessness as a serious issue.

New data from the Australian Institute of Health and Welfare shows that almost 256,000 people received assistance from homelessness services in 2015. So yes, it is serious.

High rents and tight vacancy rates are forcing many people to settle for less than ideal accommodation, be it share houses, hostels, motels, serviced apartments, or, down the other end of the scale, living in their cars, in campgrounds, under freeway overpasses, in tunnels or huddled in doorways.

As I wrote in the Hinterland Times last year, the Sunshine Coast is not immune from homelessness. In upmarket Noosa, where the median house rent is $650 a week and a three-bedroom unit rents for $510, 60 people, including 22 children, ended up at Noosa’s Johns Landing Camp Ground.

I began to wonder what happens to these people on the fringes, heading off to work each day,  in a region where there is a paucity of emergency or affordable housing.

Habitat for Humanity, an organisation founded by Millard Fuller and supported by former US President Jimmy Carter in the 1970s, builds houses for families who want to improve their circumstances. More accurately, the people who will ultimately live in these houses help build them. Those wanting to own a Habitat home have to be employed, scratch up a deposit and have the capacity to repay a no-interest loan. They must contribute 500 hours of ‘sweat equity’, helping volunteers and pro bono tradespeople. Habitat for Humanity has built, rehabilitated and repaired over 800,000 homes, providing four million people with improved living conditions.

The first time I visited Winnipeg, it was a refuelling stop on a flight from London to Los Angeles.  We sat on the tarmac and looked out the window where men in bright orange parkas circled the aircraft, fogging it with hand-held hoses to stop ice forming on the wings. Subsequent visits to Winnipeg, at one time home to the elder brother of She Who Was Born In Canada, Eh, were thankfully in the summer.

Those who have never been there probably know of winter on the Manitoba prairies via SBS weather, cheerfully reporting Winnipeg to be 40-below in January (average daily max -13.9). We were on a tour of the city with my brother-in-law when I spotted a homeless person asleep on a park bench.

“Jon, what happens to these people in the winter?” I asked. He then explained Habitat for Humanity, which at the time was very active in Winnipeg. When you live in a town where the rivers ice over and you have to plug your car in to stop the engine block freezing, you need a house – with central heating.

Habitat is a concept which would appeal to people who disapprove of social security, as Habitat for Humanity is a ‘hand-up’, rather than a handout. In Canada, Habitat’s funding is greatly enhanced through a chain of thrift shops called ReStore. Jon Toogood says he and several colleagues founded ReStore in Winnipeg in the 1980s and the concept has since spread world-wide. ReStores sell donated household goods and recycled building materials. Jon tells me the two stores he co-founded grossed $1.2 million last year.

Habitat for Humanity has not caught on in Australia to the extent it has in New Zealand where there is a national head office, 10 affiliates and 13 ReStores. There are two chapters in Queensland (Gympie and Ipswich). NSW has five chapters, Victoria has three and its operations include two ReStores.

Spokeswoman Jen Farmer said Habitat Queensland was currently researching to see if a ReStore could be viable here. Ipswich coordinator Ken Fischer said the local chapter was set up in 2005. Its first project was to renovate a house moved from Victoria to a quarter acre block. Mr Fischer said three prefab houses were donated to Habitat in 2011 to replace Ipswich homes destroyed in the flood. The homes were located on the same land, but raised on 2.5m stumps.

Mr Fischer said the Ipswich chapter had recently begun to work with social services groups to train homeless people to become trades assistants and work on Habitat projects. Long-term, they plan to look at how Habitat can provide housing for homeless people.

Not that it matters now, but I remember my brush with homelessness. I had paid for a one-way air ticket to New Zealand and had £11 to survive in London for a week.

Even in 1977, £11 didn’t go far. A contact told me about a hostel in Charing Cross where I could stay for a week, all found, for £9. I had to pay up front and, relieved to have somewhere to stay, it took a while to realise this was one of those homeless shelters where they feed you dinner and breakfast and put you on the streets between 9am and 5pm. I was assigned a bed in a large dormitory full of smelly, farting men whose tubercular coughs and nightmare screams kept me awake half the night. Some of those screams might have been my own.

In the bed next to mine was a 30-something Irishman who’d come to London to work on building sites but no such work eventuated. Like me, his capital had dwindled and he was now hard pressed to make himself look presentable and stay upbeat to look for work. We found a homely workers’ café in a Soho back lane where lunch – soup, bread rolls and a bottomless cup of tea – cost 50p. As I recall, my Irish friend and I shared a tureen of soup, snagging extra bread rolls from the counter while no-one was looking.

Appropriately, Mel Brooks’ comedy High Anxiety was one of the movie choices on the flight back to sunny, green New Zealand. I scored a job as a storeman packer two days later and rented a room in a share house with like-minded people. I sometimes wonder about the Paddy with the soft voice and shy manner and how his life turned out.

As it turned out, the brave volunteers who slept outside overnight to raise money for Fred’s Place exceeded their $20k target by $20k.