Home Friday on My Mind The dog ate my spectacles

The dog ate my spectacles 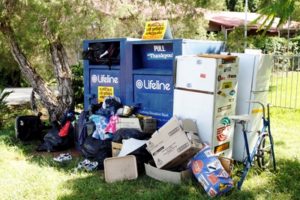 Is it wrong to blame a dog, hours after said dog has done something to make you cross? They say dogs have no sense of time, and, clearly cannot distinguish a pair of spectacles from a chewing toy. Staffies get anxious when you leave them alone for a few hours and this one chews things. We have learned to behave as if there is a toddler in the house – every chewable object goes ‘up high.’

Nevertheless, I apparently left my reading specs sitting on top of an unfinished (aren’t they always?) crossword on the dining room table. Dog therefore must have got up on his front paws and grabbed said spectacles, putting a tooth through one lens, scratching the other and chewing the end of a spectacle leg. Making Marge Simpson annoyed-at-Homer noises, I set off to the optometrist and duly ordered a replacement pair. Imagine my ire dissipating on discovering private health insurance covered all but $18 of the cost. First world problem, right?

I was just about to leave with my new specs when I was asked if I’d like to donate the old pair to a charity which collects, repairs, cleans and distributes recycled specs to people who don’t have health insurance (or $18 for that matter).

Curiosity piqued, I set off to learn more about charities which collect and distribute specific items, as opposed to those which operate charity bins and Op Shops (more on the latter later).

Lions chairman (Brisbane) Kenneth Leonard told me Lions in Australia and Japan have been increasing their collections of eyeglasses to more than 500,000 a year. Recycle 4 Sight involves volunteers as well as people on Work for the Dole, inmates from a female community correction facility and people on Community Service Orders from the court. Collectively, they have achieved a nett 400,000 refurbished pairs of spectacles annually.

Another useful charity, Soles4souls Australia, collects, cleans up and re-distributes ‘gently worn’ and new shoes to needy people around the world. It might seem obvious, but Soles4souls sets out on its home page exactly what types of shoes it wants (and doesn’t want). Sports shoes, kids’ shoes and men’s and women’s fashion, work and business shoes get a tick. They say no to heels of three inches or more, Ugg boots and slippers and women’s fashion boots. It might not need to be said (you’d think) but they also do not want single shoes, damaged shoes or empty shoe boxes.

If only this charity had been around when I decided to ditch my Doc Martens, expensive English leather shoes favoured by 53-year-old songwriters who want to look cool. I’d looked after them but rarely wore them as they were heavy and the narrow-fitting shoe did not suit my wide feet. So one day circa 2004 I put these shoes in a plastic bag and slipped it through the slot of a local charity bin.

Some years ago American songwriter Kristina Olsen, who spends a great deal of time in Australia, told me about a charity which collects old guitar strings. Actually, there are quite a few charities which collect old guitar strings (and musical instruments) to ensure poor people in third world countries get the opportunity to make music in a style we obviously take for granted.

Musician Darryl Purpose and his activist friend Kevin Deam have delivered more than 20,000 sets of used strings since starting the Second String Project in his native Holland. Many professional musicians use a set of strings for a few gigs then replace them and throw the old ones away. The Second String Project collects these lightly used strings and sends them to poor musicians.

Smalls for All was launched in 2009 by Maria Macnamara after she read an article about the problems facing women in Zimbabwe who didn’t have any undies. Donors are asked to purchase a packet of (new) underwear but Smalls for All will accept ‘gently-worn’ bras (which, few men realise, can cost up to $200).

Macnamara says a lack of underwear is a health and hygiene problem for many poor African communities. Many women often only own one pair of tattered pants or have none at all. Underwear is also seen as a status symbol and offers a degree of security.

Meanwhile, the National Association of Charitable Recyclers (NACRO) sent me useful information about illegal dumping at charity bins and Op Shops (see photo above). A report released in May and supported by charities including UnitingCare (owner of Lifeline), NACRO and the Queensland Government, estimated that about 8,200 tonnes of rubbish were dumped at Queensland charity sites in 2014-2015.

NACRO told FOMM the research found 50% of donors were ‘unintentional dumpers’ who didn’t understand the consequences; 40% were ‘champion donors’ and just 10% were ‘deliberate dumpers’. These people are (charitably) perceived to be the least informed about the consequences and ‘may not respect charity work’.

“But in fact they are dumping a huge burden on the charity they are seeking to help. Sadly, people pilfer these donations if they are worth anything and not already damaged by the weather and in the process damage other items. The charities are left to clean up the mess.”

Sources told me about worst case scenarios: prawn shells wrapped in newspaper dumped in a charity bin, contaminating everything inside. How about people who help their smallest child climb through the slot to retrieve the DVD player that still works!

The main problem for someone wishing to donate to a charity is where to take it. Most major charities have depots in the city but in smaller towns you should probably ask at your local Op Shop. Coincidentally, it is National Op Shop week August 21-27. So, dear reader, go carefully through your wardrobe and bookshelves and see if you can come up with useful books, ‘gently worn’ clothing, and other (clean) items in good condition. (See above re: unwanted spectacles, shoes, guitar strings or bras.)

So in a week when a deranged man killed 84 people in Nice, when there was an attempted coup in Turkey, when Sonia Kruger (someone whose utterances we are supposed to take seriously, apparently), said uninformed things about Muslims, when Pauline Hanson went on Q&A, Bob wrote about the dog chewing his spectacles.

But as those who read to the end would know, there is usually a relevant sub-text to Friday on My Mind. In this instance, despite callous acts of terrorism and madness, political stupidity, racism and egregious behaviours here and abroad, people are still capable of acts of kindness and charity.

Well – there is another lesson, perhaos several – if you had been more diligent and worked longer on the x-word and finished it and put your specs away, the dog would not have done his thing and you would not have had a lead into this weeks FOMM and I would not have known that bras can cost $200…all in one sentence. Try and pick a moral out of that.