Hoarding cash in a cashless society 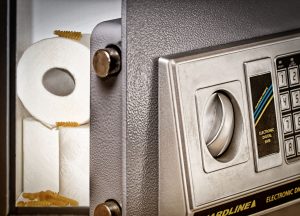 Australians have been hoarding cash, particularly through the first year of Covid-19, despite forecasts that we will be a 98% cashless society by 2024. Even if this prediction from global payments giant FIS comes to pass, some 540,000 Australians will still prefer to use cash.

You may recall a flurry of news stories on this topic in March. The research commented on the effect of a de facto ban on cash during the first year of Covid-19. Even now, merchants are discouraging the use of cash at point of sale.

The topic was prompted when Professor Steve Worthington of Swinburne University’s business school sent me an article he prepared for the ANZ Bank publication, Blue Notes. The topic was ‘Can cash survive the digital tide?’

Prof Worthington says the key issue with the domination of electronic transactions is that it excludes people who either rely on cash or prefer to use it. He argues that physical cash should be classified as an essential service (designated as a Public Good).

It may not surprise to learn that Australia’s high cash users are likely to be older people, have lower household incomes, live in regional areas and are less likely to have access to the Internet.

As you’d know, banks offer their customers internet banking, but you need a secure internet link to do so.

The Australian Bureau of Statistics (ABS) estimates that two million Australians do not have access to the Internet. Many Australians use public internet, most commonly at public libraries – not the most secure method of conducting Internet banking.

Prof Worthington notes that there is now more cash in Australia than ever before, with record growth in 2020. But it is not showing up in the Reserve Bank of Australia’s statistics as being circulated.

A cash payments study by the RBA in June last year confirmed that Australian consumers were continuing to switch to electronic payment methods in preference to cash. The share of in-person cash payments was still substantial; at 32% by number and 19% by value in 2019, down from 43% and 30% respectively in 2016. But generally, we have taken to tapping and going.

Meanwhile, the RBA is mystified by the rising demand for cash, which does not show up in circulation data. Cash (notes issued in excess of those returned), soared 17% during 2020. The average in the decade prior was 5% a year. The Reserve Bank went to its contingency fund twice during 2020, such was the demand for $50 and $100 notes. There are now 36 $50 notes and 16 $100 notes in circulation for every person in the country.

(“Where are mine?” – She Who Keeps Coins in a Tin for Christmas).

Tabloid newspapers and current affairs programmes go to the ‘stashed under the mattress’ cliche when reporting on this curious social trend. Given the meagre returns available on term deposits and the comparatively low cost of domestic safes, it is fair to assume some people have a stash of cash at home.

There could be many reasons for this apart from convenience; like hiding one’s income from the tax office, Centrelink or the ex.

I’m from the pounds shillings and pence era when shops would not cash a cheque unless they had previously done business with the person presenting it. Cash was definitely King then.

My Dad used to call hard currency ‘filthy lucre’ and while he took cash over the counter in the bakery shop, he always washed his hands before handling food. The term ‘filthy lucre’ does not mean that banknotes are dirty – it’s a biblical reference to ill-gotten gains. But I digress.

Australians have gravitated big time to electronic banking solutions. The biggest clue is the absence of queues at ATM machines and mass withdrawal of ATMs in city suburbs – 2,500 gone in 2020 alone.

Forecasts that Australia would be a virtual cashless society by 2024 were drawn from a new report by financial giant FIS Global. Mike Kresse, head of global payments at FIS, believes cash will be virtually retired by 2030.

“From individual consumers and small businesses to the largest clients, cash can’t compete with rising expectations for fast, safe and easy payments,” he said when launching FIS Global’s annual report.

“The smartphone was already transforming payments, and the pandemic brought the future faster, accelerating the trends.”

FIS forecast that by 2024, Australia will be the fourth most cash-averse economy in the world after Sweden, Denmark and Hong Kong.

Prof Worthington says Australian authorities need to work on establishing a way to include people who still want to use cash, hence his plea to consider cash as an essential service.

“We are using less cash as a payment system, but today people still need access to cash. That may be because of a desire for privacy, convenience or as a backup payment option when all else fails.”

Cash is still the preferred payment option of many small traders and sub contractors. The Australian Taxation Office (ATO ) occasionally has a blitz on companies thought to be under-reporting income, one year targeting 45,000 small businesses.

“We use a range of tools to identify and take action against people and businesses that may not be correctly meeting their obligations,” the ATO says.

“Through data matching, we can identify businesses that don’t have electronic payment facilities.

“These businesses often advertise as ‘cash only’ or mainly deal in cash transactions. When businesses do this, they are more likely to make mistakes or don’t keep thorough records.”

It’s comforting to know that the ATO differentiates between the cash economy, the ‘shadow’ economy and the ‘black’ economy, the latter run by organised crime groups dealing in drugs, prostitution and people smuggling.

This topic got me thinking about the day in 1984 when I was locked in a secure room with a million dollars. Our chief of staff had been asked to send a reporter and photographer to a bank branch in Toowoomba. The occasion was the arrival of Australia’s first $100 note – in this instance 10,000 notes delivered in a square block.  The cash was transported by train from the Reserve Bank mint at Craigieburn in Victoria. Secrecy was paramount and we were not told when the photo opportunity would happen until half an hour prior.

I have to tell you, a million dollars in $100 notes takes up a lot of space in a room.  Our photographer fitted a wide angle lens to best capture the great block of notes and obligatory men in suits.

These days, I almost always carry cash in my wallet and feel naked if I run out. Despite having a debit card and a credit card, it somehow just isn’t the same. Even during Covid in 2020, when retailers looked askance at people tendering banknotes, I slipped the odd five or ten across the counter. Cash will always be an attractive option for some people because (a) it is anonymous and (b) does not leave an electronic trail.

After all, until the day when marijuana is decriminalised, regular users will turn up at the usual location with $300 or so in cash. There are many such occasions when consumers are unlikely to use buy now-pay later options.

No sooner had I written that, an ad for Safepay popped up on my screen! How do they do that?