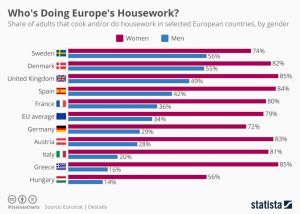 Share of adults that cook and/or do housework in selected European countries, by gender in 2016. Eurostat/Destatis https://www.statista.com/chart/15880/housework-europe-gender-split/

At the outset I should say that ‘National Men Make Dinner Day’ is a US invention and not celebrated in Australia – although it should be! The sub-heading is important – no barbecues or takeaway pizzas allowed.

Founder Sandy Sharkey recommends National Men Make Dinner Day for blokes who are completely lost in the kitchen.
“Keep your sense of humour (and a frying pan) and who knows, this could be the start of something beautiful (or charred)!”

National Men Make Dinner Day is the first Thursday in November (the 4th of November this year) so get to it, men. Plan the evening meal, print out a recipe, purchase ingredients (and a good bottle of red), and then get cooking.

I was musing about this on Sunday night when I was in the final stages of serving up home-made pizza for dinner. On switching the tray from the top to the bottom, the tray slipped out of my grasp and the pizza landed on the half-open oven door. Much swearing ensued as I manoeuvred the pizza back on the tray; not before spilling some of the toppings on the kitchen floor.

I’m a marginal case in the kitchen but luckily there is She Who is a Great Cook. But she occasionally tires of the routine and announces:

“I’m bored with cooking, why don’t you come up with something tonight?”

“Hello, is that Roddies Fish and Chips?”

My culinary skills include spaghetti bolognaise, Asian stir fry, pizza, sausages and veg and the occasional all-day roast in the slow cooker. Cooking in-house is enhanced around here by She Who Has a Green Thumb contributing produce from the garden.

As is my wont, I started researching the touchy topic of whether men do much cooking at home, or housework in general. It is called ‘gender equality’ in the jargon of academia.

There was much media commentary when the 2016 Census results began to trickle out. It seemed that one in four Australian men did no housework at all. That ratio has improved since then, with the Covid lockdown having a lot to do with helping men improve their cooking and housework skills.

The US-based Pew Research Center surveyed couples about how Covid had affected the way they share household duties. Pew found there were differing perceptions before and after the pandemic. For example, in 2019, 49% of men said they were satisfied with this aspect of their relationship, compared with 39% of women. In 2020 the gender gap widened, with 55% of men saying they were happy with the sharing of household duties, compared with 38% of women.

Gender equality has made big strides in the EU, except for housework, according to Martin Armstrong, writing for Statista. The most balanced split was in Sweden where 79% of women said they do cooking and housework, against 56% of men. The gap was wider in the UK (85% 49%) and the less said about Greece (84% 16%), the better.

(BTW, there must be some awfully messy households in Hungary – see above table- unless they’ve all got housemaids.Ed.)

Australia’s latest survey on household task-sharing indicates that 47% of couple households report that household chores are equally shared. I consider myself well entrenched in this cohort. I do the washing up 90% of the time (although not always to SWIAGC’s satisfaction). I vacuum 100% of the time (my Doctor told  me it’s bad for my back. Ed)  and it’s probably 50/50 in the laundry. Cooking, well, I make lunch about half of the time but cook dinner maybe once or twice a week and not on a schedule. My bad.

I am probably getting a bit long in the tooth to be blaming my upbringing, but our household in the 1950s was very traditional. Dad went to work and earned the ‘bawbees’ and did outside chores like mowing, heavy gardening (potatoes) and knocking off the occasional chook. Mum was in charge of the kitchen (and plucking and gutting of aforementioned chook). She did the laundry (in a copper), rinsing with a mangle over two concrete tubs. Those were the days! The kids had set chores which included feeding the chooks, helping with washing up and taking turns with the lawns and garden.

Dad, as they’d say ‘never lifted a finger’ in the house. To be fair, he worked night shift as a baker and slept in the afternoons, so could hardly be involved in the preparation of the evening meal. He would get up about 5pm, have a bath and sit and read the newspaper until dinner was served at 6pm.

As I entered adulthood, I vowed not to become that kind of man – the ‘head of the household’. Relationships with women who were becoming aware of feminism helped consolidate my stance.

Over the years I became aware that, feminism aside, not all couple households operated within a loose framework of gender equality. At one dinner party, as I rose to clear away plates and start serving dessert, one of the men muttered ‘Mate, you’re letting the side down’.

Most males (74%) were satisfied with the way household tasks are divided compared to 52% of satisfied females. Now that is a gender gap!

Some people are just not designed for certain household chores. You are either a good cook or you’re not, IMHO. If you’re the one that always overcooks the vegies, burns the chops or drops the half-baked pizza on the oven door, why not step back and let the gourmet chef do it? I’m sure our old friend Mr Shiraz won’t mind my sharing this anecdote.

Mr Shiraz is and always has been the cook in his household and a damn fine chef he is. He and partner are also avid gardeners, so there is always a plentiful supply of fresh vegetables and herbs to spare.

Once when we were invited over for dinner, our son, who was then five, piped up: “What’s Trevor cooking tonight?”

No wonder he grew up understanding that men (and boys) must iron their own clothes, thus dutifully ironing his school shirts and shorts.

National Men Make Dinner Day’s Sandy Sharkey provides an amusing list to motivate men to do more cooking (and not just on one day).

Here is the easy way out: buy a rolled roast (no waste), place in the slow cooker with peeled potatoes, onion and pumpkin, add herbs and a dash of red wine. Put on low at 9am and by dinner time it will be ready to go. Steam some vegies and set the table.

With luck, your spouse will do the washing up!

Thanks to those who contributed to FOMM’s fund-raising campaign. If you feel inclined to subscribe for $10, $15 or $20, here is the link: