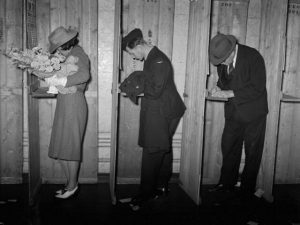 This pre-election series will include timely public interest notifications and random observations about polling (the electoral roll closes tomorrow),  leadership and grassroots campaigns. Readers are urged to share this with their young adult children, nephews and nieces and Joe at the bottle-oh.

Most urgently, if you are not already on the electoral roll for the 2019 federal election, you need to do it by 8pm tomorrow (April 18).  If you are an Australian citizen aged 18 years or older you are required to vote in the federal election. To enrol, follow this link to complete the online form.

If you are confused about who to vote for, the ABC’s Vote Compass interactive tool will give you a fair idea. I completed mine last week and was aghast to find that 6/10 was the best I could do for a preferred leader (out of four possible choices, I scored two of them 1/10!)

This is perhaps not surprising when you learn that the figureheads of the main parties (LNP and Labor), can’t scratch up 50% as preferred leader.

An IPSO poll released last week put Scott Morrison (46%) ahead of Bill Shorten (34%) as preferred Prime Minister. Let’s not get despondent about the apparent lack of confidence in political leadership. Polls like these can be decidedly inaccurate.

For example, Paul Keating went into 1992 with a personal approval rating of just 25%, ebbing to 17% just before he won the 1993 election. Other PMs who failed to garner support as preferred leaders include Julia Gillard (23%), Tony Abbott (24%) and Malcolm Turnbull (34%). Those numbers were when all four leaders were at their lowest point of public support.

If you would like to take the temperature of the over-60 cohort, a survey by the website www.startsat60.com asked readers to rank Australian PMs between 1968 and 2018.

John Winston Howard won in a hand-canter with 58.3%; despite saying he’d never say sorry, despite the children overboard mistruths, despite following George Bush Jnr and Tony Blair into an unwinnable and unjustifiable war. Still, he did ban guns after the Port Arthur massacre. Bob Hawke ranked second in the over-60 survey with 17%, just behind Gough Whitlam (15.2%).

The other nine leaders all scored less than 5%, with Malcom Fraser and Scott Morrison attracting no votes at all. Tony Abbott and Kevin Rudd polled equally poorly with 0.6%.

I offer no conclusions on political surveys except to say that even when conducted by professional polling companies, they ought to be treated with caution.