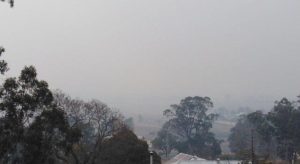 Photo: View from our veranda, Yangan November 2019 (see after photo below). BW

As Australia Day passes by, is it safe yet to say the eastern seaboard of Australia has dodged a ‘Black Summer’ in 21/22? This typically runs from December to May in most parts of Australia. Too soon?

The 2020-2021 bushfire season so far is relatively subdued due to the effects of La Nina and the wet winter and spring it brought in many parts of Australia.

We’ve seen some freaky weather, though, including heat-waves, a cyclone and hail storms. Reports of bush fires from far away Western Australia this month may have sparked anxiety in those who suffered through Black Summer in 2019.

The WA coastal town of Onslow sweltered through a 50.7C day this month, equalling a 62-year-old record set in Oodnadatta. The ABC observed that if confirmed, this will be only the fourth day over 50C for an Australian location since reliable observations began.

It is apparent that climate change will rank among the top three issues debated in the upcoming Federal election.

There is concern at the top end of town, with a survey by Deloitte’s revealing that 77% of business executives think the world is at a “tipping point”. The global survey found that businesses are starting to take action, but the level of action often doesn’t match the scale and urgency of business and moral concerns expressed in the survey.

Whatever we as individuals think about how the Federal Government is handling climate change policy, the world has already judged us.

Australia’s latest climate policies are failing to “take advantage of its potential” and it ranks last among nations surveyed, according to the 2022 Climate Change Performance Index (CCPI).

Advocacy group Germanwatch ranks the performance of 63 nations and the European Union on each country’s progress working towards goals in the Paris Agreement.

Australia slipped from 54th place overall to 59th, well below other developed countries. Australia was rated last on the climate policy table (64th), the worst of the bottom 15 countries rated as “very poor”.

“The (Australian) government does not have any policies on phasing out coal or gas, but CCUS (carbon capture, utilisation and storage) and hydrogen are being promoted as low-emissions technologies,” the report said.

Experts consulting to the report said Australia’s international standing has been damaged by climate denialism by politicians. A “lack of ambition” and refusal to recommit to international green finance mechanisms. https://ccpi.org/

He cited floods in Maryborough, QLD, and the Top End, fuelled by ex-tropical cyclone Tiffany.

The climate change documentary was first shown at the COP26 conference in Glasgow and was released on Prime Video and distributed to 260 countries.

The documentary about Australia’s devastating Black Summer was directed by Australian film-maker Eva Orner. The film recaps the Black Summer bush fires that scorched Australia in 2019-20. More than 450 Australians were killed, either directly by the fires or from the toxic air that covered three of Australia’s major cities for weeks. The fires burnt over 18 million hectares, destroyed 3,113 homes and killed 3 billion animals. Former Fire Commissioner Greg Mullins features in the film.

“I’ve never seen fires like it and I hope I never will again,” he said. “Sadly though, we are going to see more Black Summers – and even worse. Despite the extreme danger we face, the federal government refuses to ramp up emissions cuts this decade or to embrace Australia’s incredible renewable potential.

“Not long after the flames had settled, the COVID-19 pandemic rolled in and the world moved on. But for survivors, fire-fighters, business owners and mental health workers, the road to recovery was only just beginning.”

In some small way we count ourselves among the millions of Australians who suffered  physical and mental anguish during the Black Summer fires.

I recall going to see a GP in late 2019 about some unrelated complaint. He scrolled through my records and asked if my asthma was worse than usual. A Monash University study found there were 6% more weekly emergency department presentations for respiratory disease and 10% more cardiovascular presentations compared to the previous two fire seasons. The study was the first to look at the impact of bush fires on actual ED attendance numbers.

In Australia, during the 2019-20 season, the density of particulate matter in the air peaked on 14 January – at fourteen times more than the historically highest level previously recorded. According to Monash’s Professor Yuming Guo, it is known that PM1.0, PM 2.5 – the two most common particle-sized matter in smoke – can cause respiratory disease, chronic obstructive disease, pulmonary disease and asthma.

Hence my GP asking about asthma. At the time we were living at Yangan, 18 kms from Warwick in the foothills of the Dividing Range. Long-burning bush fires in the hills shrouded the valley in smoke most days. On occasions, it was so bad it drifted into town (Warwick). Asthma aside, the constant pall of smoke, the visible fires (at night) and the unpredictability of bush fires made us anxious.

The University of Western Australia conducted a survey of professional and volunteer fire-fighters after Black Summer which reveals the extent of mental anguish among those who battled the blazes.

A study published last October found the physical and mental impacts of exposure to smoke from the black summer fires was likely greatly underestimated by official health statistics.

“Virtually all of them – 97% – said they had experienced at least one physical symptom attributed to the smoke. Half of respondents reported symptoms of anxiety and depression, as well as sleep loss.

“Only one in five people sought medical attention for their symptoms, suggesting the breadth of health impacts was far greater than the number of cases officially recognised by the health system,” Walker said.

“A much wider segment of the population was exposed to bushfire smoke than bush fires directly.”

Yes, and how we still remember that late afternoon in 2019 singing Christmas carols in Warwick’s main intersection. A sudden change of wind brought clouds of bushfire smoke rolling into town like a London fog. We all ran for our cars, forced to put the lights on to drive home. 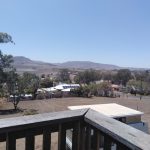 But then, after some rain…