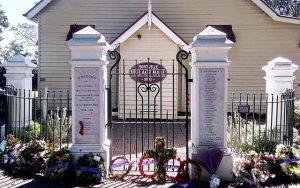 Amidst the salvo of Anzac Day stories, the people least often talked about are those who did not take part in WWI,  either because of a Christian or moral objection, for practical reasons, or because the armed forces rejected them. According to the Australian War Memorial, 33% of men volunteering for the Australian Imperial Forces (AIF) in 1914 were rejected on medical/fitness grounds. Enlistment standards were gradually relaxed in ensuing years, allowing many of the rejected men to enlist. Key among these changes was to reduce the minimum height of a recruit from five foot six to five feet.

The World War I rejects don’t get much press at all: the blokes with poor eyesight, bad teeth, flat feet, hernias or some  other physical ailment or disability which ruled them out for active service. But once rejected, they often had to bear the same stigma as the despised ‘Conchies’ or ‘CO’s’ – our unique slang for conscientious objectors. In Australia, CO numbers were estimated at less than one in 30.

Globally, there were around 16,000 conscientious objectors during World War I and their numbers swelled to 60,000 or more in World War II. During the Vietnam War, hundreds of thousands sought deferment of the call-up or, in the case of American objectors, fled across the border to Canada.

Despite the early fervour to enlist for World War I, the country on the whole rejected the notion of conscription. PM Billy Hughes took the issue to a plebiscite twice during WWI and each time narrowly lost.

Meanwhile in tiny New Zealand (1914 population 1.1 million), the government simply passed a law and conscripted young men for the war effort. And as at least one controversial account claims, they took a very dim view of men who refused to fight on religious or ethical grounds.

Archibald Baxter, father of New Zealand’s late poet laureate James K Baxter, was one such staunch CO – an absolutist to the last.

His autobiography ‘We Will Not Cease’ makes for startling reading as it sets out the cruelty inflicted by his own countrymen on those who refused to fight. Baxter’s son wrote a poem with the searing lines:

“When I was only semen in a gland

Or less than that, my father hung

Baxter Jnr’s poem, which describes his father’s ‘blackened thumbs’ refers to Field Punishment No 1, also the name of a 2014 New Zealand television movie. CO’s were hung up on poles (on the front line), in faux crucifixion pose, in the hope they would somehow recant.

The mistreatment of conscientious objectors in New Zealand has come to public attention in recent years, first through a public exhibit, and later by an opera, ‘War Hero,’ based on Archibald Baxter’s book.

Meanwhile back in Australia, for those who desperately wanted to enlist, particularly for World War 1, being found unfit to serve was a cruel blow that caused many men to become social outcasts. Unless employed in some clearly supportable on-land war effort, when these seemingly able-bodied men of a certain age were seen out and about, they were often subject to much derision.

The nearby hinterland hamlet of Montville holds a unique place in World War I history, as explained in a Canberra Times feature by Chris Sheedy, commissioned by the Canberra campus of UNSW.

The Montville War Memorial lists the local men who served with the AIF, but also the ‘Rejects’, the men who wanted to serve, but were classified as unfit.

Sheedy writes that in the celebrations of the homecomings of soldiers during and after WWI, most communities around Australia ignored those who didn’t serve.

“In fact, many shunned the ‘shirkers’ and were divided into segments of those whose family members had served and those who had not.”

The authorities must have foreseen this by developing badges for those who volunteered but were deemed ineligible to enlist, or honourably discharged because of age, injury or illness.

Sheedy notes that many men chose not to volunteer for practical reasons – they had a family to support or a farm or business to run.

Professor Jeffrey Grey from UNSW Canberra cites Robert Menzies as a prominent person who chose not to volunteer. Menzies had two brothers who went to war but the siblings agreed that Robert (a lawyer), would stay because he was more likely to provide for his parents in their old age.

Australian folk singer John Thompson, who has researched and written songs about WWI, describes it as a time when there was indeed a mood in the country among young, single people to ‘do your bit’. Thompson developed a song about Maud Butler, a teenage girl who so wanted to do her bit she dressed up as a soldier and stowed away on a ship. She got caught, but later made several other attempts to enlist.

As Thompson explains in the introduction to the song, Maud scrounged up the various pieces of an army uniform. “But she couldn’t get the (tan) boots and that’s what eventually led to her being discovered.”

Maud climbed arm over arm up an anchor rope to stow away aboard an Australian troop carrier. Historian Victoria Haskins, who researched the story, recounts how Maud gave interviews a few days after her return to Melbourne on Christmas Day, 1915.

Maud told local media that she “had a terrible desire to help in some way, but I was only a girl… I decided to do something for myself.”

While there may have been an initial wave of patriotism and a naïve yen to support the British Empire, volunteer numbers dropped in the latter years of the war.

The Australian War Museum estimates that 420,000 Australians enlisted in WWI, approximately 38.7% of the male population aged between 18 and 44. So despite the enormous peer pressure on young men to enlist, 61.3% of enlistment-age men did not join the war effort, for whatever reason.

Most of the literature about Australia’s involvement in WWI emphasises the 420,000 who enlisted, rather than the 665,000 or so who did not.

Given that a majority of men aged 18 to 44 either did not volunteer or were rejected by the AIF, it seems absurd to perpetuate the myth of the shirker. Those who stayed behind because of family loyalties, businesses, careers, or simply because they felt it wasn’t their fight, did not deserve to be ignored or worse, handed a white feather in the street or have one left in their mailbox. It is shocking to recall that a formal Order of The White Feather was formed to encourage women to pressure family and friends into enlisting.

As the AWM comments: “Some criticised the practice, arguing that ‘idiotic young women were using white feathers to get rid of boyfriends of whom they were tired.’ ”