The Eighties and the Sail of the Century 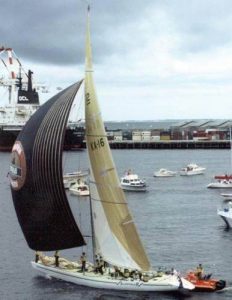 If one symbol conjures up an image of Australia as world-beaters, it is our one-off snatching of the Americas Cup yacht race trophy in the Eighties.

Those of you old enough to remember will see in the cloud archive of your distant memory (and maybe want to press delete), former PM Bob Hawke wearing a garish black and white sports coat and declaring: “Any employer who sacks a worker for not coming in today is a bum!”

He was, of course, referring to the famous weekend in 1983 when the Americas Cup was won by Australia II, a yacht owned by entrepreneur Alan Bond’s syndicate.

The Jungian theory of synchronicity came into play when at least four different newspapers (with different owners), led with a page one headline “Sail of the Century”. It was a no-brainer for pun-happy sub editors, inspired by popular Australian TV quiz show, Sale of the Century.

The Eighties were dizzy days for Australia, five years before the Bicentenary, still searching for an identity and finding it in the braggadocio of sporting achievements. That Alan Bond went on to become the country’s most talked-about entrepreneur and subsequently fell from grace owing banks and shareholders hundreds of millions is sort of by the by. We still won the Americas Cup and Bond was still a hero, the capitalist version of Ned Kelly, if I dare.

Historian and author Frank Bongiorno covers this episode and many more in a densely researched book, The Eighties – The decade that transformed Australia. This book was a 70th birthday gift from songwriter friend Fred Smith, himself something of a historian. Perhaps he knew that I was a fledgling business reporter in the 1980s and that this text would keep me up at night. It did.

Bongiorno recalls how Alan Bond betrayed his humble background (a sign-writer with limited education). America was ahead of Australia 3-1 in the yachting series so reporters asked Bond what he thought. He declared, “We’ll win, just as we did in Gallipoli.”

I was working for the battler’s tabloid, The Daily Sun, in the 1980s, arriving there as the bountiful eighties started to crumble ahead of the October 1987 share market crash.

I’d been an all-rounder, completing whatever assignment came my way. Truthfully, I was looking for a way of avoiding ‘death knocks’ (visiting a home touched by tragedy to ask for a photo of the late family member).

I went on many a long lunch and used my secret weapon (I didn’t drink) so usually returned with a story or three. The 1980s was a time when the so-called ‘white shoe brigade’ held sway. These daring entrepreneurs cajoled banks, stockbrokers and investors into backing their wondrous schemes.

The likes of Bell Resources (Bond’s company), Adsteam (John Spalvins), Westmex (Russell Goward), Ariadne (Bruce Judge), Qintex (Christopher Skase) and Rothwells (Laurie Connell) went up like the rocket and down like the stick. A few lived on under different ownership structures, often going back to their core business (diversification often being the key to their downfall).

Bongiorno’s book suggests that, generally speaking, Australian business/finance journalists missed the boat when it came to exposing entrepreneurs for the charletans some of them turned out to be.

He used words like “suggestible”, “enthralled” or “mesmerised”, to describe the reaction of reporters given access to entrepreneurs like Bond, Russell Goward or Christopher Skase (himself a former finance journalist).

“The spectacular expansion of Qintex was built on Christopher Skase’s hard work, his bankers’ generosity and the public boosting offered by admiring business reporters, in awe of the rapid rise of one of their own,” he wrote.

Yet by October 1989, Qintex was being wound up, its debt to bankers ballooning to $1 billion (amid reports that Skase’s management company received more than $40 million in consultancy fees).

As Bain & Co economist Don Stammer said of those times: “the fact that the entrepreneurs’ castles were made of sand seemed to elude even the most experienced business journalist.”

The media agenda in the Eighties was to write aspirational stories about the corporate heroes re-shaping Australia. Then the share market crash of 1987 arrived and many of them headed for the exits. The publications who had talked these people up now had to find ways of tearing them down again. As always, the little people (the taxi driver who tips you about a little gold company that is going to strike it rich), got royally shafted.

At the peak of the share market frenzy in late September 1987, the All Ordinaries Index was running hot. Stockbrokers were prone to say things like ‘you could float a pea pod in this market’. Many small start-up companies went to the share market in this dizzy phase, raising capital to further their cherished dreams.

I recently sorted through old cuttings from the Eighties and found this gem about a small Queensland company looking to make artificial snow. It was quite exhilarating to follow up on the adventures of a 1980s entrepreneur/inventor, to find him still doing in 2019, what he first set out to do.

Alfio Bucceri was the inventor behind Permasnow (Australasia), a company which listed in late 1987 to raise $10 million. The goal at the time was to use the artificial snow technology in traditional ski resorts when real snow was in scarce supply.

Mr Bucceri’s dream was to develop indoor ski centres. After he sold his 33% shareholding in 1988, the company passed up the indoor ski centre opportunity and moved into other ventures such as hotels and retirement villages.

“From that point on (1988), I continued with my creative talents and created and patented new snow making machines and concepts, as well as branching into inventing toy and sporting products,” he told FOMM.

“These products include Snow4kids that now can be found on Kuta Beach in Bali, Australia and China.

“The childrens’ snow event concept is built around the new snow-making machines that I invented called the B4.

In January 2019, he exhibited the machines at the Beijing ISPO Ski Show. “They have been used for the past 10 years at Ski Resorts in China and South Korea as well as Sea World at the Gold Coast, where the snow machines make fresh snow for the Penguins every day.”

“I was instrumental in bring indoor skiing to the Middle East in the early 1990s, when I partnered with MKM Holding’s Sheik Mana Bin Kalifha Al Maktoum to create the first Indoor Ski Centres there.”

Last year he was involved with a Permasnow installation at a new major casino project in Macau.

He does not regret his brief flirtation with the share market but found it easier going it alone.

“I have self-funded most of my projects since the 1980s. It is a longer but easier route to succeed without the restrictions placed on me during my younger days at Permasnow.”

And how ironic, given gossip just before the 1987 crash that Qintex planned to add Permasnow to its 170+ subsidiaries.

Ian Verrender’s explanation of why business journalists succumb to being part of the story they were supposed to be covering: