Home Friday on My Mind The digital hoarder 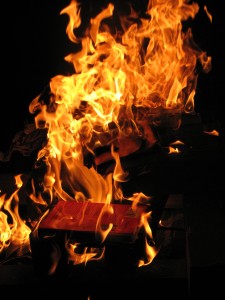 My laptop is doing odd things – taking forever to load things I think I need and occasionally sending messages that the hard drive is full – blue-screen critical. The same goes for my two terabyte external hard drive – chockers, as are most of the USB memory sticks lying around.

I downloaded a programme which analyses your computer and graphically shows you what type of files are taking up most room. Yes, I know, the programme just added to the mess, but it was a salutary lesson. Part of the problem is that modern PCs come with back-up systems that take up an enormous amount of space on a hard-drive and if you don’t set it up right, it just keeps on adding back-ups, willy-nilly. Then there are very large music and video files and photos. OMG, the photos. I don’t know where to start – do you? Let’s not even think about the cupboard full of prints and negatives from the 1970s through to our first digital cameras.

Those of us with a penchant for hoarding (you know, collecting bent nails in case times get really tight), add to the physical clutter by becoming a digital hoarder. For example, I’m pretty sure my Outlook folder (27GB) contains every email I ever sent and most emails I ever received. The smart thing to do would be to delete everything. I recall a business acquaintance once telling me he came back from three weeks holiday and did just that with the hundreds of emails that accumulated while he was away – control alt delete.

“If it was that important, they’ll get back to me.”

We are now being told that we can store electronic files in “the cloud” and, what’s more, it doesn’t cost anything. Do I feel secure about my scanned family archives being stored off-site by some faceless internet company? Not bloody likely.

I have gradually been whittling away at the edges of my hoarding habit. The trouble is when you’ve been writing for 40 years, that’s a lot of paper. Boxes full of journals, two four-drawer filing cabinets full of what are probably first drafts, second drafts and multiple copies of the same documents.

Then there are the shoeboxes full of letters from one’s parents, siblings and lovers. Last year I did a “cull” of the correspondence files which to be honest, amounted to throwing out Christmas and birthday cards from the 1970s and 1980s. But when it came to Father’s letters, and the letters I wrote to him (retrieved after he died and my sister and I cleaned out his flat), I confess I sorted them more or less chronologically, put rubber bands around the bundles and carefully put them back into a new shoe box.

“Someday my son will find this interesting,” I tell myself, thinking about the historical relevance (Dad complaining about Mr Muldoon and Rogernomics (unpopular 1980s economic policy in New Zealand). He probably won’t, but you never know, do you?

Our children, generally speaking, don’t appear to have a clutter problem at all, apart from their bedrooms.

For Gen X and Y it’s all about NOW and who will be first to post a party photo on Facebook. They live with phone in hand and (having conducted a straw poll) I can tell you that few of their cohort ever back up data.

Hoarding ranges from very specific collecting (stamps, butterflies, fridge magnets and so on) to a major psychological problem.  TV current affairs programmes love a good hoarder, especially if they can get footage of the reporter squeezing his or her way past 10 years’ worth of newspapers stacked in the hall. Keeping “stuff” because of its historic relevance is something else again. I have a couple of archives boxes full of newspaper cuttings, stories I wrote for the long-defunct Daily Sun. You might remember The Daily Sun – for a while there it was a genuine competitor to The Courier-Mail and we took our work seriously, often beating the CM to stories when they had five journalists for every one of us.

The Daily Sun library had paper files, thousands of them, kept up to date by librarians who would help you find the background stories you needed to write a new one. As far as I know this historic news archive (1982 to 1991) was taken to the tip. The National Library will have The Sun on microfilm, but those hand-pasted clips, an alternative view of Brisbane’s written contemporary history, are gone forever.

Last year I wrote a song around this subject, Burning Father’s Letters, which includes a spoken word narrative about Charles Dickens and the Gad’s Hill Bonfire. In 1860 Dickens took more than 22,000 letters and private papers out to the back of his estate in County Kent and torched them. They included letters from famous writers of the day including William Thackeray and Lord Alfred Tennyson. Other writers of the Victorian era also burned their personal correspondence to thwart publishers who craved collections of letters which they’d publish after the writers’ death. http://www.thegoodwills.com/mp3-player/

Someone who has our new album wrote to say how the song resonated with him as he had been through this very situation after his Mother’s death. I want to close this week’s column with an extract from his letter to me.

“On my recent trip to the UK for my Mum’s funeral, I took with me a large packet of letters written to me over the years by both my father and my mother. They went back decades. The elder of my two sisters told me a while ago that the best thing to do was to burn them, but somehow I couldn’t do that. The finality of it all, the end of recorded, written memory just seemed too much. I guess in the end that’s what happens to most correspondence from those who die. I thought, “Will my kids ever want to read these?”‘ And the answer was No, they won’t. They will never know what it was like in my home when my parents got a telephone connected; the first black and white television; the crises and sometimes disasters that befell them. A chronicle of a working class family’s life from the 1970s in short – them in urban England; me, discovering the world.

“I took the bundle of letters back home and gave them to my other sister who has been reading them and who says they are beautiful and she is glad I didn’t destroy them. There are others – boxes of them from people who played an important part in my life. Can I bear to burn them one day? Will I have to?”

It is difficult to get rid of family letters isn’t it. Thank goodness emails do not have the same emotional attachment.

I have been known to print out “important” emails and file them!