Home Folk music The back roads to Canberra and musical reunions

The back roads to Canberra and musical reunions 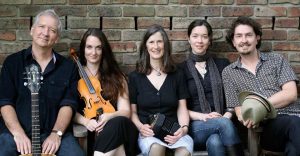 When we planned a 2,500 kms round trip to the National Folk Festival via the back roads to Canberra, it seemed like a monumental expedition. Now that we’re home again (via Dubbo and Goondiwindi), it seems a weak effort compared to the distances travelled by overseas guests including Manran (Scotland), Nancy Kerr and James Fagan (UK), April Verch (US), George Jackson (US) and Vila Navio (Portugal).

For example, George Jackson committed himself to a 35,000 km round-trip, flying with his two other band members direct from Nashville to LA (3,218 kms). From there, they flew to Sydney (12,065 kms) then by road to Canberra (286 kms). After arriving in the late afternoon, there was barely time to eat and rest before the first gig at 11pm on Saturday night. Such is the peripatetic life of a professional bluegrass musician.

While the musicians involved in more than 120 acts were wending their way to Canberra, we chose mostly secondary roads, including an excursion through the verdant Bylong Valley in New South Wales between Denman and Bathurst.

At times I wondered if we would get there. We were towing a caravan, albeit a small one. The winding mountain road on either side of the Bylong Valley was particularly challenging. There were hairpin bends, one way bridges, narrow sections where two cars scarcely had room to pass by. Not to mention frequent signs warning of fallen rocks (and we did see a few on the sides of the road).

My main mission at the five-day National Folk Festival was to catch every concert by the fabled Australian family band, The Fagans, re-uniting for the first time in three years. Bob and Margaret Fagan and their adult children James and Kate are these days joined on stage by James’s partner Nancy Kerr. James and Nancy live in the UK, where Nancy has established a strong solo career. It reached a high point in 2015 when she was judged BBC Folk Singer of the Year.

“Yes it is quite obvious, isn’t it? He revels in it. I wouldn’t say the music is secondary, but looking across the stage and seeing Margaret and then his two kids singing in harmony, it still visibly moves him and he talks about it openly.

“When we were children we just wanted to be doing a slick and professional show. But as I’ve got older and I’ve got children I completely understand that there are some things more important than being professional. It’s still very valued in the folk world – being yourself and being true to your story.”

That elusive musical quality emerged when the Fagans employed four-part acapella singing. Their stirring version of Alex Glasgow’s Close the Coal House Door and its third verse about the Aberfan colliery disaster raised ‘goosebumps’. The refrain “Close the coal house door, lads, there’s bairns inside” references the 1966 disaster in Aberfan, Wales, when a colliery slag heap collapsed on a school, killing 114 children and adults.

Folk songs often tell real stories and some don’t pull punches, like British leftie songwriter Leon Rosselson’s hard-hitting The World Turned Upside Down. The song tells the story of The Diggers, a ragtag group of latter-day socialists who in 1649, after the execution of Charles I, occupied the land at St George’s Hill in Surrey. They believed that the land could now be used to establish collaborative farming communities. It is supremely ironic that today, St George’s Hill is an enclave of the super-rich; lavish mansions and acreage estates owned by Russian oligarchs, TV personalities, film stars and rock musicians, not to mention the landed gentry.

You might know the song through the 1984 version by Billy Bragg, but my preference is the Fagans singing this socialist anthem in four-part harmony.

James and his sister Kate started performing with their parents in the late 1980s while in their early teens. From performances at Sydney folk clubs, they graduated to the Maleny Folk Festival (before it grew too big and went to Woodford). James had just left high school when the group recorded their first album, ‘Common Treasury’, in 1991.

Yes, the trip was worth it; a family reunion, a musical reunion and time for Bob and Margaret to spend time with their grandsons Harry and Hamish. The latter appear to be following the family tradition, sharing the stage with James and Nancy, to perform ‘Mr Weather’. Nancy said the children deserved to be there because “they totally gave me the idea for this song”.

James and Nancy recently recorded their first duo album in a decade, a live album, ‘An Evening with Nancy Kerr and James Fagan’.

“The time’s not been idly spent,” James said of the past 10 years. “The last (duo) album came out in 2010, a big departure for us, as it was all songs and tunes written by ourselves.

“At the same time that album emerged, so did our first child, Hamish, and that required us to give up the lifestyle of living on a narrow boat and being troubadours and river gypsies.

“It was a big life change. The children came along, we moved into a house, we formed a new band and started diversifying what we did so one of us could be home.”

James reckons he has been to the National Folk Festival at least 20 times and fondly recalls scoring his first professional solo gig there when he was just 18.

This was also the case for bluegrass fiddle player George Jackson, who also enjoyed this year’s festival as a family reunion. His parents made the journey from Alice Springs to attend the festival and spend time with him. Mind you, it’s hard to pin down a dedicated musician at a music festival – they are usually picking up extra gigs. For example, George and two other bluegrass musicians stepped up for a spontaneous gig with songwriter John Flanagan.

It might have seemed like a jam, but when musicians of this calibre get together, magic things happen.

There were other highlights among the 150+ acts at the NFF including Scottish band Manran and their Scottish Gaelic songs, the virtuosity of instrumental band Kittel & Co and their marriage of Celtic music, bluegrass and classical, and the innovation of original Portuguese band Vila Navio.

Rounding out this eclectic festival, I was fortunate to catch one of comedian Martin Pearson’s daily ‘Brunch’ sessions where he trades barbs with guests. Singer and debater John Thompson was the guest that day. They traded Catholic school day experiences at the hands of teachers like Pearson’s “Sister Genghis”.

Amid a hilarious skit “how to wash a cat” they were interrupted by a loud ‘ting’ as one of Canberra’s brand-new shiny red trams arrived nearby.

“It’s not a tram,” said Thompson, crossly. “Trams share the road with other traffic. This has its own dedicated track. Therefore it is not a tram, it is light rail.”

I asked John about this later and he emailed me yesterday.

“There is some disagreement online about this distinction.

All trams are light rail, but only light rail that features “street running” can be called trams.

“The Canberra light rail only has “street running” at a couple of corners – it’s not a tram!”

That’s the thing about folkies – they have strong opinions.