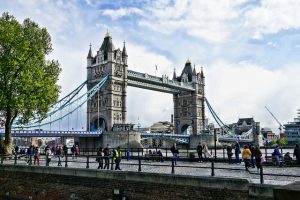 There’s a Waifs’ song with a plaintiff chorus that defines the homesick expatriate – “I’m in London still, I’m in, la la London still.”

I’m a Waifs’ fan but never thought much of London. The capital city of England, despite its numerous parks and gardens, museums and galleries, ancient monuments and centuries of history etched into every building, was never among my peak travel destinations.

Sure, I was broke, lonely and depressed on my first two excursions in the 1970s. But subsequent visits, when not broke, lonely or depressed still left me with those negative impressions: the sooty smell, the pressing crowds, the awful smelly tubes, the poor huddled masses waving flags outside the gilded palace. I could go on.

There were magic moments; hearing a choir sing in St-Martin-In-The-Fields, visiting the Tate Gallery on a day when there were very few people about; a lovely day at Kew Gardens with a broke, lonely and depressed friend, back in the early 1970s before the tranquillity was ruined by flight paths in and out of Heathrow.

But those moments and memories are supressed beneath the intangible air of menace which permeates some London boroughs. Even when living among Aussie and Kiwi expats who gathered in Shepherd’s Bush and Earl’s Court, there was (to me), an air of something violent about to happen.

My broke, lonely and depressed Aussie mate advised. “Mate, you should leave the weed alone – it’s making you paranoid.”  But even when I took his advice, the loneliness and depression persisted.

We were living in a suburban squat, which is something poor people can still do in London, where squatter’s rights hold firm.

Back in London 1970-something, we pooled our money, pinched a bit from the household petty cash and went to see the new Martin Scorsese movie, Mean Streets. It’s about a wannabe mobster who gets in over his head. The violence and desperation cheered us up no end.

I’ve been thinking about those la-la London days in the aftermath of the callous, premeditated attack on innocent bystanders at London Bridge, which left eight people dead and 48 injured.

In the early 1970s, the Irish Provisional Army had London in a state of fear. In case you’d forgotten, the IRA’s reign of terror in Ireland and in the UK between 1969 and 1997 makes the attacks by fanatics in Manchester and London look like random, unrelated incidents.

Regardless, the level of violence shown in the 2017 attacks on May 22 and June 3 drove British authorities to escalate the threat level to ‘critical,’ then ‘severe’ (‘severe’ meaning a terrorist attack is highly likely).

Parents of young people determined to head off to Europe for an adventure are in a state of high anxiety. According to DFAT there are more than 130,000 Australian residents living in the UK. As of June 7, 10,610 Australians had registered with Smart Traveller as currently visiting the UK. When you add in exchange students and people on two-year work visas, the collective angst at home is understandable

Our parents were similarily horrified when in the early 1970s we left for the obligatory OE (overseas experience) with our brand new backpacks and passports.

“The IRA is leaving parcel bombs on the Tube,” my Dad warned. “And in pubs.”

“Dad, I could get killed crossing Karangahape Road,” I replied.

Teenagers and people in their early 20s have the carefree mindset “it’ll never happen to me.” It will, however, happen to someone. And ‘it” does not have to be a random terrorist event. On average 171 people have been murdered in Greater London every year since 1990 – more than three per week.

And you might get killed or maimed by accident. Pedestrians and cyclists are always at risk on London roads, though a mitigation campaign seems to be working.

Transport for London (TfL) figures show that the number of people killed or seriously injured on London’s roads fell by 3% in 2015.

TfL says it is making “good progress” on its target for reducing death and serious injury on our roads by 50% by 2020.

These are just a few examples of how living in a city of 8.75 million carries a correspondingly higher level of risk. The rate of crime against Londoners jumped substantially in 2015, according to Metropolitan Police. The murder rate was up by more than 14% with 113 murders occurring in the capital in the 12 months to September 2015.

But as people who watch Lateline know, London, with a murder rate less than 2 per 100,000 is a long way down the list of the world’s most dangerous cities.

If you are the nervous type, scratch these 50 cities off your wish list. While 19 of these high-murder risk cities are in Brazil (where nine-year-old kids armed with hand guns prowl the streets), four cities are in President Trump’s United States of America (St Louis, Baltimore, Detroit and New Orleans).

Not that any of this makes the attacks on London Bridge or at the Ariana Grande concert a fortnight earlier any less serious. But I find myself pondering the faux bravado of politicians who bluster and bluff, saying “enough is enough.” It’s exactly what the parents of uncontrollable teenagers say, when trying to deal with the latest escapade, be it drugs, drinking, truanting or under-age sex. As actions plans go, they are futile.

There’s an air of futility and misdirection about the current focus on Muslim radicals and how the ‘tread softly’ approach is not working.

The far right in Britain and here in Australia simplistically call for a ban on all things Islam. Maybe my memory is hazy (I was drinking in those days), but I don’t recall anyone calling for a ban on people from Northern Ireland living and working in the UK.

Australia’s shameful mood of xenophobia (fear of foreigners), is not restricted to Muslims.

An editorial in the New Zealand Listener last month, “They’re just not that into us,” used modern dating argot to discuss how Kiwis are being marginalised. And it’s government-sponsored. The list of discriminatory policies includes:

The leader writer adds: “The one affront we can be sure wasn’t deliberate is Australia’s export of myrtle rust.”

As the editorial says, penalising New Zealand residents is a handy (and popular) way to distract attention from the Turnbull government’s political and fiscal woes. It would not surprise to see the UK Prime Minister (whoever that May be), misuse Muslims in the same way.