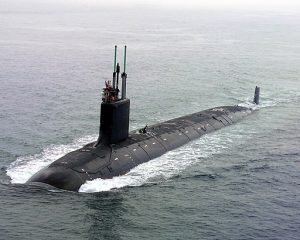 Call me late to the party, but this submarine commentary has been on the back burner for a couple of weeks. As long-term readers would know, I often eschew the 24/7 news cycle, in favour of (ahem) in-depth reports.

The headline might look like an outrageous flogging in a rugby match, but it is actually the fact of the matter. North Korea, with a population close to ours (25 million), has 71 submarines. Australia has just six. North Korea’s subs are diesel-electric only, although it does have nuclear weapons and in fact tested a missile just last week! But no nuclear subs as far as we know.

Most of North Korea’s ageing submarine fleet is comprised of relatively small coastal patrol subs or mini subs. An infographic prepared by Al Jazeera shows that the top 10 countries own a total of 343 subs, with North Korea, the US, China and Russia accounting for 247.

Six countries (the US, UK, Russia, China, France and India), have nuclear-powered submarines. The US dominates the nuclear submarine stakes with 68, ahead of Russia (29) and China (12).

That’s the global picture behind Australia’s newly-inked alliance with the US and UK (AUKUS), which led to Australia scrapping a contract with France to build 12 conventionally-fuelled attack submarines. What sharpened the topic was a timely opinion piece in the Brisbane Times by former Prime Minister Malcolm Turnbull.

He claims the hyperbole about the new defence alliance has been ‘dialled up to 11’.

I don’t usually pay much attention when a former PM critiques the government of the day. But in Turnbull’s favour, he put the French submarine deal together during his tenure, so he probably knows more about it than most. Despite a tendency to refer to ‘my government’, a trait he holds in common with Kevin Rudd, Turnbull puts the issue into perspective. For a start, he makes it clear that every country that has nuclear submarines has a nuclear industry. He also points out that while Australia is scrapping one contract, it has not replaced it with another; just “discussions’’ over the next 18 months.

“There is no design, no costing, no contract,” Mr Turnbull wrote. “The only certainty is that we won’t have new submarines for 20 years and their cost will be a lot more than the Attack class submarine, the first of which was to be in the water by 2032”.

Veteran investigative journalist Brian Toohey has big problems with the timeline for delivery of the nuclear subs.

“What role will Australia’s nuclear-powered attack submarines play if a war with China breaks out in the next 20 years? The answer is none. The first of these subs will only become operational after 2040 and the last around 2060, if all goes well.

“Worse, they will reportedly cost well over $100 billion, the latest estimate for the cost of the 12 French-Australian conventionally powered submarines that the Morrison government has scuppered.”

Prior to World War 1, there was considerable dissent in Canberra as to whether we should have a submarine fleet at all. In the end we comissioned two subs in 1914 as a response to the enemy’s use of submersibles during WW1. The Royal Australian Navy Submarine Service did not operate subs during WWII but provided bases for allied navies in Fremantle and Brisbane. We also had Oberon class subs from the 1950s to 1970s, mainly used for surveillance. https://www.asc.com.au/submarines/australias-submarine-history/

Our current fleet of six Collins class submarines was built between the 1990s and 2003, subject to massive cost blowouts and delays.

The tactical advantage of the nuclear-powered sub is that it can stay underwater for months at a time without surfacing.

If you have seen movies like the Crimson Tide, The Hunt for Red October, Das Boot or Abyss, you might imagine how submariners feel, cooped up in a metal tube 24/7. There are insights aplenty in the latest BBC melodrama, Vigil. The six-part mini series is made by the team that created Line of Duty. Much is made of the psychological impact of prolonged underwater isolation, the lack of privacy and temptations to stray from a strict regime of regulations.

Australia’s AUKUS announcement is likely to rekindle the flame that burns in the hearts of those who oppose nuclear power and nuclear weapons. This will probably happen regardless of Scott Morrison’s assurances that “Australia has no plans to acquire nuclear weapons”.

The ageing vanguard of the anti-nuclear movement (my vintage), grew up through the Cuban missile crisis, the ensuing Cold War and nuclear power station meltdowns. We had plenty of reasons to oppose Australia’s nuclear ambitions. It was (and still is) widely assumed Australia would at some point embrace nuclear energy, given that we have a plentiful supply of the raw material (uranium).

There was opposition to nuclear power, but the broader movement was aimed at stopping governments from developing (and testing) nuclear weapons. While France is getting all huffy about its scuppered submarine deal, let’s not forget the nuclear tests it carried out in French Polynesia (Mururoa and Fangataufa atolls) between 1966 and 1996. Don’t go there.

When journalists asked NZ PM Jacinda Ardern about AUKUS, she said she had not been informed – “Nor would I expect to be.”

Anti-nuclear protesters are also fearful of the dangers of radioactivity leaking from damaged power stations (as happened on Three Mile Island (1979), Chernobyl (1986) and Fukishima (2011). Check out these 28 accidents (that we know about).

Scarier still is this list of 38 sinkings, collisions, fires and other submarine accidents since the year 2000. Nine nuclear submarine sinkings or scuttlings have a list of their own.

Submarines have come a long way since the world’s first military submersible, The Turtle, which operated during the American Revolution in 1775. Captained by Sergeant Ezra Lee, the pear-shaped submersible failed in an attempt to attach a small mine to the hull of the gun ship, HMS Eagle, in New York harbour. The craft was powered by hand cranked propellers.

Submarines have proven to be the most lethal machines in warfare. The German U-boat fleet lost 178 boats in WWI but sunk 5,000 naval and merchant ships. Likewise in WWII, the U-boat fleet sunk some 3,300 ships, most by firing torpedoes at them.

However, submarines have many uses apart from their peace-time role as a military deterrent. My favourite is the transparent sphere used by David Attenborough’s team to bring us brilliant underwater imagery. Other uses include deep water exploration, research, filming, tourism and private recreational activities. The closest I’ve come is a glass-bottom boat on a Barrier Reef excursion. Ed)

If you have a spare $25 million or so you could ask Seattle-based shipbuilder US Submarines to show you its mid-size luxury submarine yacht model. The Seattle 1000, with a range of 3,000 nautical miles, has five staterooms, five bathrooms, two kitchens, a gym and a wine cellar spread across three levels.

Boys and their toys, eh! My post-war childhood contains a happy memory of bath time, playing with a toy submarine which came free in a cereal packet. The toy sub was powered by household baking powder and one could while away hours in tepid water watching it submerge and surface.

Perhaps you had one too.

Meh, Bob. All things considered here, nothing matters. All it takes is one, one nuclear missile launch and the world is done. Whether it comes from a submarine or land-based launch site will matter nil. But happy to read how much you enjoyed them at bath time. Stay young at heart!

Indeed Dan, so we can be relieved that NK so far has no nuclear subs as it is all about range. You can still buy one of those toy subs from the 1950s on eBay!