Home Friday on My Mind Simple as ABC 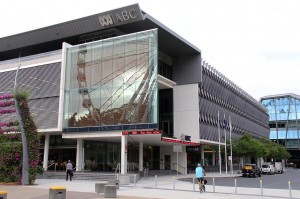 We’re hearing a lot about the national broadcaster at the moment because management has been handed an open razor by the current government and told to slash $254 million from its $1.22 billion operating budget within five years – a massive 20%+ cut. The ABC has already started making changes that will cut $207 million from its bottom line (in 2015). As you’d expect, jobs will go in ABC newsrooms, programmes will be cut or centralised in Sydney and some of our international radio services will go. Hopefully they will axe Upper Middle Bogan and It’s a Date while they’re reviewing what is valuable and what is not. 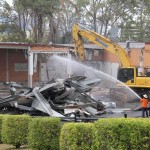 Managing director Mark Scott says 400 jobs will go and the property portfolio is to be reviewed. This will overjoy developers, who have long slavered over the central locations of many ABC-owned buildings. In Brisbane the ABC sold its riverside site at Toowong (left) and moved to a new campus at South Bank (above). 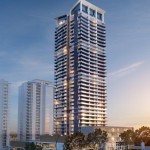 In Perth, listed developer Finbar and its Singaporean joint venture partner have already pre-sold 43% of the 226 apartments planned for Concerto, a 38-level apartment building at 189 Adelaide Terrace, East Perth, the 1.28ha former site of the ABC, bought by Finbar’s partner in 2008 for $37.58 million.

If only Mark Scott had called me earlier! The answer is so simple – re-introduce the concept of an annual public radio/TV licence.  People used to pay an annual licence fee back in the 1920s and continued to do so until the introduction of colour TV in the early 1970s.
An annual fee of $35 per Australian household would raise $273 million a year. That’s it, job done. The licence would allow households to listen to ABC and SBS radio and all of its variations and watch ABC TV, SBS and NITV, as well as catch up on Iview and SBS on Demand.

The problem with a public radio licence is that roughly half the people in this country will scream blue bloody murder about being asked to cross-subsidise those dangerous lefties at the ABC. If you read stories online about the budget cuts, keep on scrolling down and read the comments. It’s a hilarious debate between left and right wing ideologues. I know the ABC monitors comments and approves or disapproves, but surely they must realise what a loaded bunch of nonsense this is, as the lobby groups on both sides of the debate give it their best shot.

You can learn a lot about a large organisation by reviewing its annual report. Scoff if you like, but that’s how Warren Buffett made billions, by assiduously poring over company reports and then getting to know the companies better through site visits until he decided to buy.  The ABC’s annual report contains what all such reports should – a high degree of disclosure. On page 115 we find a summary of contacts received from the public in 2013-2014, totalling 52,287 emails, letters, faxes, texts and phone calls.
There were 26,484 complaints, although most of them were about programme standards and scheduling. Sure, people complained about bias. There were 2,812 contacts alleging party political bias, 2,038 contacts alleging bias other than party political, 1,439 contacts complaining about factual accuracy and 810 claiming a lack of balance.
In short, only 9.3% of the contacts were about bias or party political bias.
So if you strip out allegations of leftie bias, what’s the motivation for the funding reduction? Not much really – just a government intent on cutting funding to many areas that the previous government deemed important. (Alas, the previous one burned so many bridges we fear they will never find a way to cross back over the River of Discontent.)
It is politically dangerous work, tampering with the ABC. People in the bush and the outback rely on it utterly for news, weather, and information about the wider Australia and, if there is a crisis (a flood, a ‘super cell’ a la Brisbane last night, a bushfire, a pending tsunami) the ABC is their only lifeline.
The ABC’s critics often complain about “middle management bloat” (which happens to any large organisation). But an examination of the wages bill shows ABC staffers don’t get paid as much as those who drive trucks or trains for multinational mining companies.
Wages and salaries at the ABC rose 6% to $368.1 million in 2013-14, for an average salary of $67,615 (compared to the Aussie ‘average’ full-time wage of $75,556). I know that’s not how it works in the real world, but it gives you a bit of a picture. More than half the ABC’s 5,444-strong workforce (57.9%) earns less than $85,000 a year. Another 1,050 earn between $85,000 and $100,000. There are 161 men and 98 women who earn more than $145,000. Just how much more than $145,000 is not stated (page 109). However, according to a ‘leaked report’ passed on by the Australian newspaper in November last year, Lateline host Tony Jones topped the list at $355,000, while half a dozen other presenters earned between $250,000 and $300,000. But what a responsibility: reporting to the Australian public and the Commonwealth Government as shareholder.
Comparisons are odious, but David Koch from Channel 7’s fluffy ‘Sunrise’ programme is said to be on $1million.

But as I was saying about radio licences
Some of the older readers out there will remember the days of radio licences. The original concept was a radio which was tuned to one station and then sealed. The customer paid for a licence and that fee was handed over to the station his radio received. That restrictive system thankfully didn’t last too long and in 1924 licences were based on A class (public radio) or B class (commercial radio).
Class A stations received grants from the Commonwealth via radio licence fees and Class B stations were allowed to sell advertising.
That system lasted until 1972 when the reformist Whitlam government abolished radio and TV licence fees, decreeing that the ABC be funded directly by the public purse.
In the UK, the BBC still charges households £145 a year for a combined radio/TV licence. The BBC is being pilloried in the UK press, with its annual budget blowing out to £3.4 billion, partly because of the 2010 decision by the Chancellor of the Exchequer to freeze the television licence fee until 2016. The BBC, clearly the global benchmark for quality TV and radio, was forced to trim its budget by 20%, as it also had to take on the cost of running the BBC World Service.
Mark Scott has no doubt been looking at how they did this (redeploying or sacking staff, sharing programmes between stations and channels, sharing radio news bulletins, more repeats and a reduction in original programming).
I would happily pay $266 (£145) a year for the priceless freedom of choice the ABC and SBS/NITV has been providing. Who else is going to broadcast the likes of John Pilger’s Utopia, or Babakiueria, that satire on the history of Australia’s settlement, or the ribald adventures of Rake’s Cleaver Green?