Readers guide to Friday on My Mind 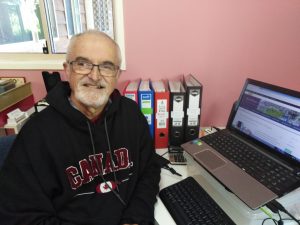 “Retired” journalist Bob Wilson with five years’ worth of Friday on My Mind. Photo by She Who Rarely Gets A Mention

A few weeks ago I promised you an overview of the past five years’ worth of Friday on My Mind missives, but the Federal election got in the way. Sorry about that. Today it’s a mostly politics-free zone.

I started this weekly column (it was supposed to be a one-off) with my theory (and not at all an original idea), about taking refugees and asylum seekers off Nauru and Manus Island and resettling them in small Australian towns.

But ‘The Pittsworth Solution’ wasn’t the first to get a run.

Other topics got in the way, like explaining why Morris dancers dance up the sun on the first of May. That was episode No 1; and not only have I written about this pagan ritual since, I have actually participated.

I write on random topics, often mixing subject material so if you have specific interests (solar energy, travel, politics, refugees, media analysis), use the search function to find stories.

We were travelling the outback in 2014 and on many occasions since, so there are many road travel adventures. In my naivety, I wrote about crossing the Nullarbor as if no-one had ever done it (or written about it) before.

Some of the outback posts were popular, including one about people dumping garbage (Kiljoy was here) and the time we met the Black Dog Ride, a gang of motorcyclists circumnavigating the continent to raise awareness about depression and suicide.

Thanks to my elder sister who lives in New Zealand, I have five ring binders crammed with hard copies of Friday on My Mind. She does not have a computer so every two months or so I print out the latest and mail them off. I got in the habit of printing two copies so now have a filing cabinet drawer full of fat FOMM folders. (Downsizing, dear, remember the promise about de-cluttering. SWTSO (She who throws stuff out)

Those of you adept in the online arts might scoff to learn it took me a couple of years to discover I could insert a search function into the website. This is a very handy way to check if you are about to repeat yourself, which is not hard to do when you’ve been maintaining a blog for a long time. One of Australia’s longest-serving bloggers, economist John Quiggin, had one solution for this, posting at Christmas 2015:

“Here’s a Christmas post from my blog in 2004. The theme is that nothing about Christmas ever changes” (although he does go on to discuss the “war on Christmas”).

This is billed a readers’ guide to FOMM, as at last two thirds of readers receive the weekly email and have no need to visit the website other than out of curiosity or because I have linked an old (but relevant) article. Tip: Links to other articles are coloured blue.

I had occasion to update my curriculum vitae (CV) the other day and found that, yes, you can teach the old dog new tricks, as 107-year-old Swedish blogger Dagny Carlsson put it, after taking her first computer lesson at 99.

Under ‘other skills and experience’ I can now add webmaster, after designing and maintaining two WordPress websites with little outside help.

When you first visit the <bobwords.com.au> website, click on ‘Bio’ in the header. This is where I talk about myself in the third person, which, as any clinical psychologist would tell you, is not a healthy thing.

Nevertheless, here’s a line from my self-penned bio which has been quoted elsewhere. I said I’d started FOMM mainly from a sense of exasperation with the sins and omissions of the daily media.

“ As Bob (that’s me) told a fan: “not that I want to bite the hand that used to feed me, but I think intelligent readers want more than a picture of Kate Middleton’s bum.”

My Recommended Reading section keeps evolving. The website statistics manager tells me it has had 199 visits of late, so hopefully some of you will also become fans of writers suggested there.

Some recommended blogs disappeared as they fell victim to blogging deficit syndrome. I’m not aware of anyone who keeps actual track of the world’s 500 million blogs, but it’s a fair guess at least half of them were single-use, short-term or, if they started out with ambitions of longevity, fizzled out after a year or two.

I have written a couple of pieces about blogging, including the one when I stumbled upon Dagny Carlsson and explored the wonders of Wikipedia.

In this one, I discovered how blogging in some countries can be a life-threatening activity.

I started off quietly, emailing the weekly rant to a small email list which grew and grew as people shared with their friends. Then, as the list got larger, I enlisted MailChimp, which somehow evades spam catchers and also schedules delivery if you are not going to be home on the day you would normally send the email. MailChimp also tells me how many of you actually opened the email!

FOMM is neither a blog nor a citizen journalism site as it mixes news, research and whimsy with a fair amount of (small l liberal) opinion.

I had a conversation on election day with a former colleague. We bemoaned the absence of what was once the journalist’s mantra – “tell both sides of the story”. Hard to believe there was a time not so long ago when one would never put personal opinion into a news story, or the news pages for that matter.

I regard Friday in My Mind as a newspaper column without the newspaper. Some columns provoke a torrent of emails; other times there is a lamb-like silence. If I make a mistake and SWTSO misses it too (uncommon), I am certain to find out about it from an alert reader, sometimes within minutes. The beauty of being online is you can correct it right away.

Few people post online comments, but those who do are inevitably adding something relevant to the topic. Despite the relative lack of feedback, my website statistics show a fairly consistent readership. Inexplicably, the most-read column of the past five years is this one about bipolare disorder and gout, where I found research that made the connection between one and the other.

Other popular reads were first-person accounts about adverse reactions to paralysis ticks and at least six items dealing with depression and anxiety.

Readers liked my recent take on the Christchurch tragedy and, going back a while, tributes to David Bowie and Gough Whitlam.

So if you have joined the FOMM flock in the last year or two or more recently, there’s quite a trove of documented journalism and comment to explore.

For example, if you enter ‘David Bowie’ in the search window you will be rewarded with Canadian astronaut Chris Hadfield’s celestial performance of Space Oddity. 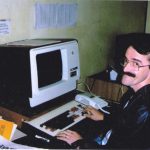 Depending which boxes you ticked below the line on May 17, you may have to take the ‘leftie rubbish’ with a grain of salt, as a few long-term conservative readers apparently do.

We can thank Pliny the Elder for translating addito salis grano. In the modern context it means to view something with scepticism or not to interpret something literally. A good motto for Friday on My Mind, I reckon.