Home Friday on My Mind Our gorgeous gorges bucket list 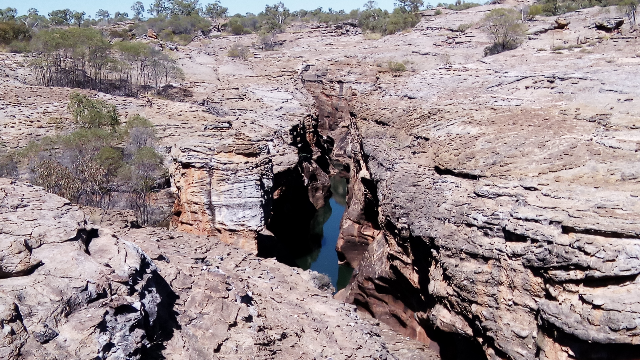 Although I clearly remember rubbishing the concept of a “bucket list”, it appears we may have had one all along, namely a list of famous Australian gorges.

This week’s visit to much-lauded Cobbold Gorge, south-east of Georgetown in Savannah country, turns out to be the 10th gorge we have visited from a debatable list of 14 “must-do” destinations. Despite its remoteness, privately-owned Cobbold Gorge attracted 11,500 visitors last year and judging by our two days staying in the bush caravan park, they’re on track for another good year.

Most Australian gorges of any merit are enshrined within national parks, with Cobbold Gorge the exception, through an agreement with the Queensland Government where a tourism venture is allowed to exist within a pastoral lease. The Terry family own the 330,000ha Robin Hood station, with 4,720ha set aside as a nature reserve. The family run 4,000 head of Brahman cattle on the property, which they have owned since 1964. They are the second European owners, after the Clark family who owned it since 1900 and the Ewamian, the traditional owners.

Robin Hood station, even today, is accessible only by a partially sealed road from Georgetown to Forsayth and then 41 kms of dirt road. The land in this region is cut off in the wet season (December to March). It’s not difficult to imagine the hard life out here before electricity, before a proper road was formed from an existing bullock track.

Like most gorges, Cobbold was formed millions of years by water scouring out a channel through a basalt cap then down into the sandstone and gravel escarpment. This is a narrow gorge, 2m wide in some places, which gives rise to the theory that it is relatively young. 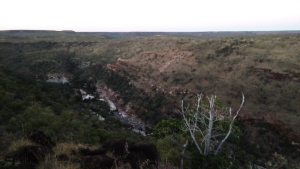 Last week, we spent a couple of days at Porcupine Gorge, a National Park between Hughenden and The Lynd. Porcupine Gorge is sometimes referred to as Australia’s ‘mini Grand Canyon’ as its canyon walls are wide apart, eroded over millions of years by Porcupine Creek, a tributary of the Flinders River. We took the walk down into the gorge, a mere 1.2 kilometres, except for the 1,800-step uphill return walk. It cost about $25 to stay here two nights – stunning location but a bit short on facilities (hybrid dunnies). You have to come prepared, carrying your own water, food and power source.

By contrast, Cobbold Gorge tours have to be booked and paid for ahead of time and there is no alternative to a guided tour. Now that I’ve seen the infrastructure the Terry family have built there and taken the tour, I have no argument at all with the $92 fee (and $41 a night for a powered site). The facilities (the village also has motel units) and amenities are first-class.

Most of the information here was gleaned from a bit of note-taking and chatting to the guide, Graham, after the tour. The owners invested a lot of money to set up this eco-tour without any security of tenure. It was only recently that the Queensland government came to an agreement that the family would be compensated if at some future point the gorge becomes a National Park. As it stands, the nature reserve, a tract of old growth bush, can also be used for grazing and water can be taken from the Robinson River. No felling is allowed though, so the bush is allowed to regenerate.

We put this landmark on our list when last in the Savannah country circa 2007. We’d bumped into old newspaper contacts at Undara Lava Tubes. They told us they’d just come from Cobbold Gorge and said it was a special place and a must-do experience. It seems this natural gorge became a tourist attraction largely by word of mouth. The first white people to see the gorge were the Terry family’s teenage children who apparently drove a truck far enough in to carry a dinghy to the gorge and go exploring. It wasn’t long before friends and family started asking if they could visit and that led to the establishment of the tourism enterprise in 1994 (200 people visited in the first year).

The tour involves a short journey by four wheel drive bus, a walk up the sandstone escarpment to see the gorge from above then a ride on a flat bottomed boat (powered by whisper-quiet electric motor).

The walls rise up to 30m and at times the gorge is so narrow you can almost touch both sides. Spiders sit patiently waiting by their intricately spun webs. There’s Jurassic vibe about this gorge, silent and still except for a freshwater crocodile which retreated beneath a rock ledge as we approached.

Last year, Etheridge Shire Council proposed making an application to have 49,000ha of the shire listed by UNESCO as a Geopark. The ABC reported that local graziers were worried what impact this could have on pastoral activities. The proposal caused deep divisions in the shire, but at this stage the plan has not been progressed.

One could see why Etheridge Shire would want the region to become ever-more attractive to international eco-tourists. The famous Undara Lava Tubes are also within Etheridge Shire, which encompasses an area two-thirds the size of Tasmania. For all its size, the shire has only 1,500 ratepayers and has to rely on grants from State and Federal governments.

Our previous visits to well-known gorges like Carnarvon (Qld), Nitmiluk (Katherine Gorge, NT), Wattarka (Kings Canyon, NT) and Karajini and Widjana (both in WA), have mostly involved independent exploration. Hiking in outback gorge country is not without its risks. You can get lost, run out of water, have a fall or be bitten by a venomous snake.

No wonder Cobbold Gorge asks hikers to sign in and out when exploring the bush tracks. They also have a ‘no-selfie’ rule when standing atop the escarpment! It makes you think how the early explorers got by on horseback carrying water in canvas dilly bags, living off damper and bully beef, perpetually in a quest for the next waterhole.

I expect this won’t be the last of our gorges visits on our six-week adventure. There’s Barron and Mossman further north and Cania Gorge on the way back home.

When you visit one of Australia’s remote National Parks, with or without gorges, it is hard not to soak up the timeless influence of the First Nations people. Cobbold Gorge was named after the famous Australian pastoralist Francis Cobbold. The Ewamian tribe were the original inhabitants of this land and there is a section on the gorge tour where guides tell visitors the Ewamian have asked them not to interpret the site or allow people to enter and take photographs.

A few months back, Aboriginal journalist Jack Latimore wrote an opinion piece in the Guardian Weekly, noting that two mountains in central Queensland were to revert to their Aboriginal names.

Jack thinks all Australian landmarks and monuments should revert to their first nation names, but he doesn’t stop there. Boring names like Brisbane, Sydney, Melbourne and Adelaide (all named after British Lords and Sirs), should also be given their native monikers. How about Mianjin instead of Brisbane?