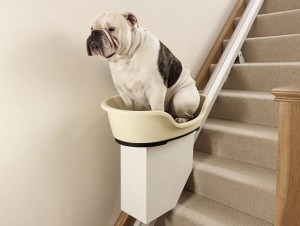 Chunky the bulldog is pictured in the world’s first stair lift for overweight dogs. Photo: www.rcagroup.com

You may have noticed last week how I skilfully bypassed National Seniors’ Week and wrote about the IT/social media stuff that engrosses 30-somethings. Physiotherapists love this ‘old body-teen brain’ syndrome. They get a lot of ongoing business from 70-year-old men falling off ladders while pruning trees with chainsaws, or moving a full filing cabinet only to have all four drawers roll out at the same time. But I digress.

For me, the young at heart feeling is quite acute this week as we rehearse for a couple of gigs at a folk festival in our home town. It’s hard to think of yourself as old when you’re wearing jeans and a T-shirt, guitar around your neck, singing songs about love and peace and a dead man’s shirt.
The subject of age came up the weekend before last when staying with rellies at their new abode, which has a flight of polished wooden stairs that lead to a sunken lounge. The problem with the see-through steps is that the 15-year-old poodle can’t do them. He tries: a tentative paw, a quizzical look, a tiny whimper and there he stands, quivering, for however long it takes for someone to take pity and carry him up the stairs.
“You need a Dog Stairlift,” I jested (before looking it up on a search engine and finding that, yes, someone has already thought of that).

Adapting to arthritis and ancientry

What a marvellous idea, and multi-purpose, too. You could adapt this for aged cats, your pet python; banjos, anything small but heavy you don’t want to carry up or down the stairs.
The truly lazy could arrange the sunken lounge just so; the sofa’s here, the remote is there and the lift is within arm’s reach (“Send down another Merlot and some cheese and crackers wouldya?”)
As we age and our bodies start to let us down, we adapt in almost imperceptible ways. We stop using the bottom shelves of the fridge, the oven and the dishwasher, so much less crouching down. Stooping we can do. We put the recycling bin out every fortnight, not waiting until it is so full of empties you can’t drag it anywhere.
Old dogs too are good at adapting, despite what they say. The poodle has worked out how to exit the downstairs back door and run around to the front, whining and pawing the screen door. When we had a German Shepherd and she got old and arthritic we went to a $2 shop and bought a big plastic box we could put on the ground at the rear of the station wagon so she could get in without having to jump, like she used to. Only took her one go to get that right.

I was telling Mr Loophole that I was having trouble getting up from a crouching or kneeling position. Mr L, who does stretching exercises every day of his life, showed me his patented way of becoming upright with the least effort; I parried with the Dru Yoga lever-yourself-off-the-floor-in-a-spiral move.
As my Scots Auntie (90-something) said, last time I was there, prising her old bones off of the sofa: “Ach, this getting auld is’nae for the faint-hearted.”
Or as Billy Connolly says, “You can tell how old someone is by how long it takes them to get out of a beanbag.”

The latest demographic studies confirm what we have suspected for a while, the old and increasingly infirm will soon outnumber the upcoming generation.
As you stand around the water cooler at work, you can use these figures to impress people how much you know about how the world’s population is growing—and aging.
The National Institute on Ageing says very low birth rates in developed countries and birth rate declines in most developing countries are projected to increase the population aged 65 and over to the point in 2050 when it will be 2.5 times that of the population aged 0-4. That’s a big change from 1950, when there were 335 million children in the 0-4 age group and just 131 million people ages 65+.
United Nations Population Division estimates for mid-2010 said there were 642 million persons aged 0-4 and 523 million aged 65+ .( We assume people ages 5-64 make up the rest of the 7.2 billion). So the UN is projecting the 0-4 age group will decline between 2015 and 2020 (a historical first), having peaked at around 650 million. The 65+ population is projected to rise from 601 million in 2015 to 714 million in 2020 during the same period. Crikey, that’s just five years away.

Masters, not just a degree

Medical science, meanwhile, coupled with elevated community awareness of “wellness”, means that more of us will live to be 80, 90 or even 100 years old. So my tongue in cheek song about a 100-year-old Morris dancer who challenges the new squire of the team to a dance-off is maybe not that far-fetched.
Even in my somewhat atrophied social circle you can find people like Mr L, still playing basketball at 68 (“And I’m one of the young ones,” he’ll say). People who have always played a sport or kept fit frequently progress to Masters Games status. The last competition held at the Gold Coast saw 91 year old swimmer Joyce Faunce winning a gold medal in the 50m freestyle. Heather Lee (85) set two new world records in the women’s walking events (category 85+) at the Masters Games 2014. She walked 3,000m (3km) in 23 minutes and some seconds, backing up with a win in the 5,000m (5km) walk in 40:06:97. These high-achieving oldies put a new twist on the meaning of life, making the dragging of two wheelie bins up a 100m driveway seem like a doddle.

Rumination can be fun

I was persuaded to think about age and its complexities this week when engrossed in one of Clare Russell’s Dru Yoga sessions. The stillness and body awareness quickly makes one aware of what parts of one’s body really hurt. The Dru Yoga ethos is you don’t do it if it hurts. So there are things one doesn’t do, but one does enough to feel it in the body later.
I’m very bad at relaxation/meditation. Random thought keep swooping in – don’t forget eye drops, shoelaces and taco shells on the way home – oh no, I should have gone to the toilet first – did Bill Shorten lose the leadership ballot or did I just have a microsleep and dream that? – what will I write about on Friday and should I correct things I got wrong last week? All kinds of ruminative thoughts surface, dive and resurface, over and over. At one stage I invented a tiny leprechaun with a little rubber mallet and mentally trained him to run around my head walloping me, saying encouraging things like: “Take that, ye eejit.”

As a thought-stopping exercise it was shite.

Last week:
• Correspondent Barbs wished her son could have studied Latin but she steered him into German (for the sciences), not the other way around;
• Fiddler on the Roof tells me that Si hoc legere scis nimium erudittionis habes! means ‘if you can read this you are over-educated’ (just in case someone adopts it as a tattoo).

Postscript:
Listen to Ann Leung’s interview with us played on 612ABC this morning ahead of the Maleny Music Festival which starts tonight.