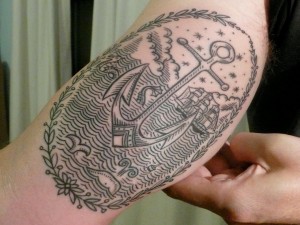 Roll up, roll up, see the tattooed lady

Oh dear – nothing to argue about – a) I do not mind other people being walking art galleries – but I hope it does not become compulsory. b) What happens if the tatooist makes a spelling mistake. Just imagine having ‘Laurul I love you’ running down your arm or ‘Waltrude yuo are my Wirlds’ flexing with your biceps everytime you scratch your ear.